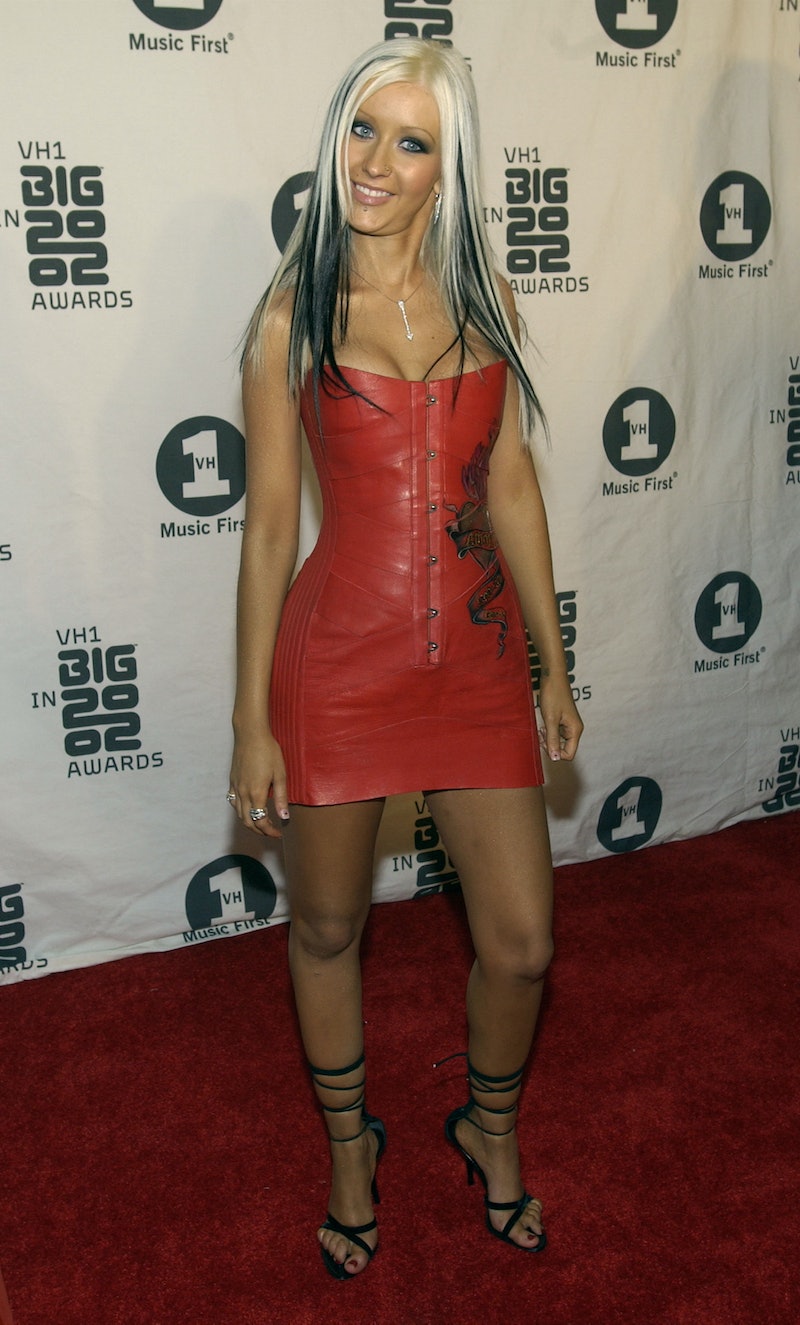 Tons of different '90s trends have popped up all over the fashion and beauty world in the past year. There's been everything from jelly sandals to glossy brown lipstick making a comeback. But the latest is best kept in the vault. As Allure found, the '90s chunky highlights trend is back in full swing, and people aren't sure how to feel about the striped 'do.

The '90s were a magical place where just about anything went style wise. There were some trends that the era was known for, and chunky highlights were one of them. The two-toned style featured highlights that basically just looked like big stripes in the hair. Most popular was the light on dark, which everyone from Jessica Simpson to Kelly Clarkson rocked.

Since then, people have opted to go for a more subtle, blended look. All trends eventually repeat themselves though, and some do it sooner rather than later. According to social media posts by users like colorist Sonia Diaz, chunky highlights are back. I'm talking dark and light shade combinations that you haven't seen in decades.

Honestly, I didn't think I'd see hair like this ever again. Fashion always comes and goes, but hair is something that is always revolving. Until now, I suppose.

Christina Aguilera was one of the celebs who took the trend to another level. The singer rocked everything from dark and light streaks to pink, black, and white hair. She had a new hairstyle almost every time she stepped onto the red carpet, and continued the trend into the early '00s.

Kelly Clarkson also loved the dark on light combo. She sported the hair when she won American Idol in 2002 and didn't stop until the mid-'00s. It seems to have been a major trend among singers. Even Jessica Simpson and Britney Spears have rocked the trend in the past.

As of Oct. 26, no celebrities had jumped on the bandwagon. Unless you count Kylie Jenner's 2016 Halloween costume. The Lip Kit queen opted for the hair trend to channel the singer's style in her Dirrty video.

While most trends bring smiles of nostalgia, this one is a little different. There are a whole lot of feels about the chunk highlights look. People are completely torn over the '90s trend, but there's no in-between. Either you completely love it or you hate it.

Here's what people are saying about the once-loved trend:

If you're loving the trend, don't come to this hair stylist. Chunky highlights go again Megan's morals, and, honestly, I'm with her.

There will soon be a super hero whose job is to go around and fix all the wonky highlights in the world. But that day is not today.

Other people are headed to the salon to get the throwback style for themselves. Note the light on dark combo, which is very '90s.

Is it good? Is it bad? The emoji-less tweet doesn't say, but it is an odd enough site that people talk about it on social media.

I'm going to go out on a limb here and say that this hair style vetoed that style.

That's the beauty of trends — you don't have to follow them if you don't want to.

There are bold opinions about these highlights, my friends. That emoji isn't just throw around all the time.

Ask and you shall receive.

I think it's safe to say that the general consensus among hair stylists is that these should be in style anymore.

I think it's safe to say that the internet will never agree on anything. Whether you're a fan of the highlights or hoping they go back into the trend vault, there will always be someone on your side.