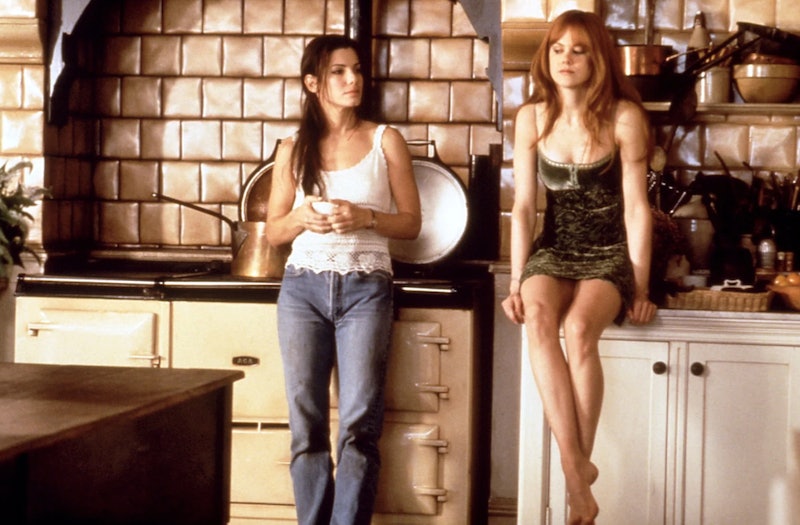 There are plenty of reasons that Practical Magic endures as a Halloween classic. The '90s movie takes place in an idyllic New England mansion with a perfect farmhouse kitchen; numerous scenes are set in October with a black kitten climbing through every frame; the cast includes the brilliant pairing of Sandra Bullock and Nicole Kidman as sisters and Stockard Channing as a wise auntie witch; there are not one, but two, opportunities to watch Bullock fall in love with a handsome stranger; and of course, there's the iconic midnight margarita dance party to "Coconut" by Harry Nilsson. But the coziness we get from all these elements, a sensation that somehow feels exactly like drinking a cup of tea under a blanket with a gentle rain falling outside, is something we can get from many a '90s Halloween movie. What makes Practical Magic stand out is that for all its romantic twists and sweeping moments, it's really a story about womanhood and sisterhood being their own form of superpowers.

In honor of Practical Magic celebrating its 20th Anniversary this October, right in time for the holiday, it's time we appreciate the piece that sets this magical little movie apart from its peers. The film's still-great heart is a delightful surprise — we all know far too well the pain of returning to a classic from the '90s or early aughts only to find that we have to brush aside a few offensive story elements because people just didn't know better back then. But at the end of the Owens sisters' journey, there's a sense of overwhelming joy over the fact that sometimes, just sometimes, '90s filmmakers got it right.

At first, it's just the little things, like when Kidman's Gillian senses, through a slightly mystical connection to her sister, that Bullock's Sally is grieving the death of her husband and needs Gilly to hop in the car in the middle of the night and rush to her side. Then there are other moments like the scene in which Gillian protects her sister by casting a spell during Sally's PTA meeting that forces the other bullying moms to stop excluding her. There's also the simple element of three playful, yet heartfelt bonds that the writers paint between the film's pairs of sisters (the aunts, Gilly and Sally, and Sally's two daughters).

But there are also the really hefty stakes. As you may recall, Gilly's supposed dream man, Jimmy Angelov, reveals himself to be an possessive, alcoholic abuser when Gilly calls one night, crying. Sally's attempt to rescue her sister from the horrific situation lands them both in a hostage situation with Jimmy and when they end up killing him in self defense, we get the hallmark of any good Halloween movie: a sequence of some ill-advised hocus pocus set to plinky music against the backdrop of a blustery evening. They bring him back, he tries to kill Gillian again, so they kill him and bury him, only for his spirit to become the big bad for the rest of the film.

This is about the time that the would-be male savior appears: a detective, Officer Gary Hallet (Quinn), who is investigating Jimmy's disappearance and who also happens to be Sally's literal dream man (the one she quite literally dreamed up as a child). The film's trajectory at this point temporarily tricks us into believing that this man and his inherent goodness will save our dear witchy sisters from their tormentor. And true, in one scene, his badge wards off Jimmy's ghost while Sally and Gillian hide behind him. But in a brilliant turn of events, this man's power isn't enough to save the sisters. In fact, no man's power is.

In order to save herself, her sister, her aunts, and her daughters, Sally has to harness her own power — the witchy power she's been afraid of using for the entire film — and the strength of every woman in their tiny New England town. Of course, that last part should be more difficult, considering that throughout the entire film, most of Sally's neighbors have shunned or tormented her because of her mystical roots. But the moment that the women in town hear that Sally's sister has been wronged by a crooked man, their sense of community and sisterhood is ignited and they all flock to the Owens' house to help rid of her abuser. When the women gather in the kitchen before the ritual, they exchange stories about spooky, potentially magical things that have happened to them as witchy aunt number two, played by Dianne Weist, strolls by to whisper, "there's a little witch in all of us." And while it's definitely a cheesy line, it's not hard to allow it to work its magic on you, if only for a moment.

This is the true power of this classic "rom-com" — not Quinn's impossibly blue eyes, or a first kiss set to Faith Hill's "This Kiss," but the fact that there is a connection not just between sisters or female relatives, but between all women. And that when those women combine, there's nothing a toxic, downright evil man can do to best them. (Gee, I wonder why that might feel great for women everywhere right about now.)

And at the end of the film, as we watch this circle of powerful witches, spooked housewives, and town gossips come together, harnessing their differences and their power for one goal — saving their fellow woman from her tormentor — the moment isn't just a little spooky, whimsical magic in time for Halloween. It's a physical manifestation of sisterhood, a glowing circle of protection around Sally and Gillian, two bonded sisters holding each other at in the center.

Sure, Officer Hallet does sort of "save" Sally by ensuring that Jimmy's death is ruled "accidental" so she and Gillian won't go to jail for saving themselves from that awful, awful man, and sure, we all enjoy the romantic moment in which Sally and Hallet finally get their happily ever after, but those aren't the reasons so many women keep returning to this movie — we can get those pieces in a thousand other '90s gems.

The thing that keeps Practical Magic fresh in the hearts of so many women is the fact that every moment in which that twinkly signature score creeps into a scene, or a character looks up at the stars, or women join hands together, is a moment driven by the power that's naturally within the women onscreen. So, when we're all done cozying up on a fall evening with Kidman and Bullock and, let's be honest, something pumpkin spice-flavored, we also get to walk away feeling rejuvenated, and perhaps, even a little powerful ourselves.

More like this
Reese Witherspoon Confirms This Fan Favorite Will Return For 'Legally Blonde 3'
By Jake Viswanath
Taylor Lautner Copped To Finding Jacob "A Little Annoying" In Twilight
By Stephanie Topacio Long
James Cameron May Come To Regret His 'Titanic' Door Experiment
By Stephanie Topacio Long
Alicia Silverstone Revives Her 'Clueless' Character In This Super Bowl Commercial
By Jake Viswanath
Get Even More From Bustle — Sign Up For The Newsletter
From hair trends to relationship advice, our daily newsletter has everything you need to sound like a person who’s on TikTok, even if you aren’t.