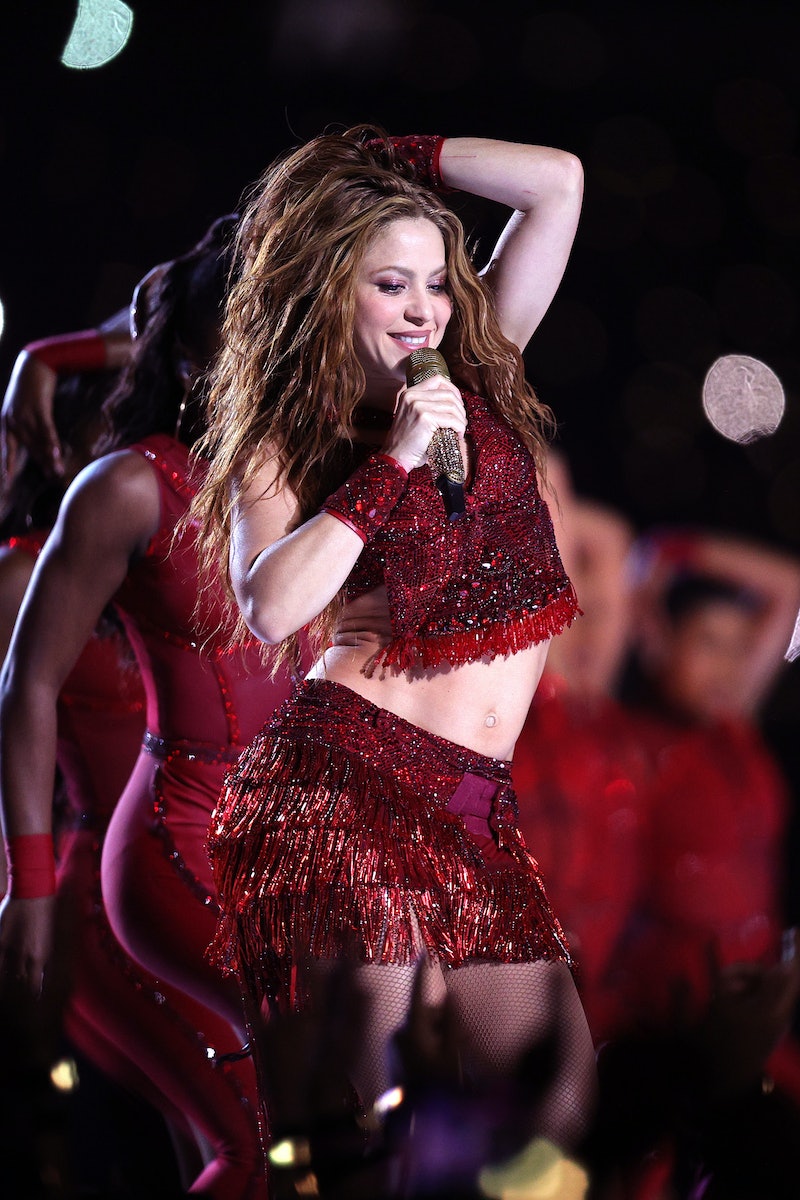 You may have thought the Super Bowl is about football, but that was before Jennifer Lopez and Shakira straight up stole the show with their epic Halftime performance. Both women brought their own fierce and dynamic talents to the stage; however, the most talked about moment came after Shakira gave an unusual tongue gesture to the cameras midway through her performance. But while the act may have confused some fans, the actual meaning behind Shakira's viral tongue moment at the Super Bowl carried with it a deep, cultural significance.

Along with sticking out her tongue, Shakira had also made a loud, high-pitched cry during the meme-able moment, which was done for a very intentional reason and ties to the singer's Middle Eastern roots. According to several Twitter users, the noise she made is referred to as a zaghrouta, a high-pitched sound used to express joy and celebration in Arab culture. Some Twitter users also indicated that the gesture could also be a reference to Carnaval de Barranquilla, a world famous event in Colombia that is held in Shakira’s hometown.

This wasn't the only instance throughout the performance that Shakira paid homage to her Colombian and Lebanese heritage, but it was the most talked about moment by far. However, many fans interpreted the moment incorrectly, believing the gesture to be more comical than anything else, likening her to a turkey or making a SpongeBob SquarePants reference. It didn't take long though for many members of Twitter to come to the singer's defense and provide a bit of context behind the true meaning of that moment.

Hatem Bazian, a senior lecturer in Near Eastern and ethnic studies at the University of California at Berkeley, spoke with The Washington Post about the viral moment, explaining that a zaghrouta is commonly used by women at weddings, though it has been known to be done at birthdays and graduations as well. “It definitely has a long history without putting a particular date to it,” he said. “So much so that no wedding or celebration would be complete without having a zaghrouta expression taking place.” Bazian added that it's equivalent to how an American cowboy would jovially shout "yee-haw" in celebration.

This just goes to show that it's best to do a little research before making snap judgments about something. Because sometimes, even something like a viral tongue moment, can have a deeper meaning than you ever realized.

More like this
Kate Bush Revealed The Real Meaning Behind 'Running Up That Hill' Lyrics
By Darshita Goyal
Twitter Is Freaking Out Over Rihanna’s 2023 Super Bowl Halftime Show Announcement
By Stephanie Topacio Long
Stormzy’s “Mel Made Me Do It” Is A Tribute To Black Talent & Success
By Catharina Cheung
Everything To Know About Taylor Swift’s 10th Studio Album, 'Midnights'
By Grace Wehniainen and Jake Viswanath
Get Even More From Bustle — Sign Up For The Newsletter