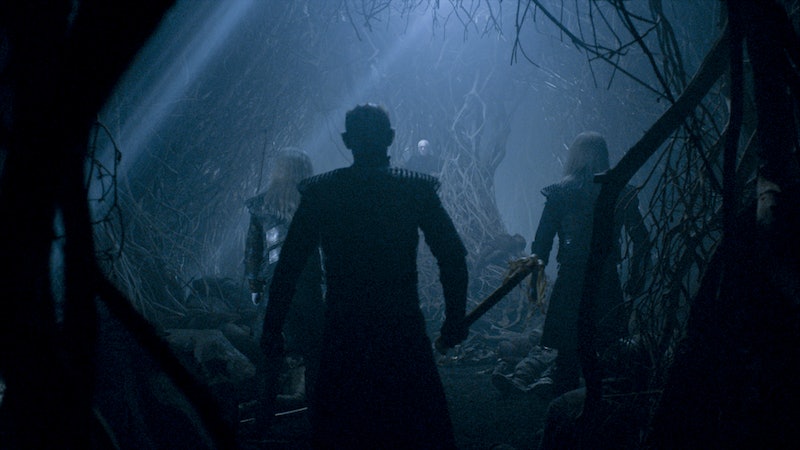 So HBO seems to be making good on their threat to create a Game of Thrones prequel for television. The pilot will be written by Jane Goldman and co-created by Maester George R.R. Martin himself. And, as much as I am a die-hard book nerd who is still mad about Lady Stoneheart, I have to admit that it sounds pretty dang cool: as reported by The Wrap, the new series is set to chronicle "the world's descent from the golden Age of Heroes into its darkest hour," covering an entirely different era of Westerosi history.

Of course, if you haven't read the books (or if you don't spend the wee hours of the morning browsing A Wiki of Ice and Fire like I do) then you might be wondering what, exactly, the "Age of Heroes" is. Or rather, when it is. Well, lucky for you, I have an answer.

The Age of Heroes began with the Pact on the Isle of Faces, over 10,000 years before the action of A Game of Thrones. The Pact was a treaty between the First Men and the Children of the Forest, who promised to stop firebombing each other and try to get along. Post-Pact, Westeros saw a grand Age of Heroes, marked by kings marrying gods and mer-people, winged knights, and fantastical feats of heroism. This is when the seven kingdoms of Westeros started to form, albeit in slightly different chunks, all ruled by petty kings. In far away Essos, dragons were first being discovered by Valyrian shepherds. And then came the Long Night, when White Walkers invaded from the North, bringing darkness and terror for a generation, until one brave Last Hero rose up to defeat them.

But this all happened 10 thousand years ago. To put that into perspective, 10 thousand years ago in our world is around when humanity figured out how to grow wheat. That's just... a lot of years, even in a fictional dragon world. And here's why that enormous time jump matters:

If we know anything about George R.R. Martin, it's that he loves history. The entire Song of Ice and Fire series is loosely based on the English War of the Roses, with more than a few other episodes from history scattered throughout (yes, the Red Wedding was based on a real thing). Martin's whole approach to fantasy writing is to take real life and dial it up to 11, with more blood, more incest, and more magic popping off all over the place. Westeros is a thinly veiled version of Fantasy England, if England was much bigger and full of ice zombies and whatnot, and Essos is pretty clearly Fantasy Europe and the Fantasy Middle East. He's not exactly reinventing the Fantasy Wheel here.

Martin also likes to play with the distortion of history, though. Yes, he's writing a swords and sorcery epic, so there is magic in his universe. But he continually shows up how reality gets distorted by time and distance, especially in a pre-mass media world. We spend time with Dany and her three baby dragons off in Qarth, for example, and then a few chapters later we hear people in far western Westeros talking about the Dragon Queen and her ferocious three-headed dragon. We see Robb Stark chilling with his doggo Grey Wind, and then we hear rumors from his enemies that he is a werewolf boy who transforms himself into a slavering direwolf all the time (I mean he probably was a warg, but that's a whole different can of beans).

We also see how non magical rumors get started: Tyrion is meant to be a vicious imp, sometimes described as having wings or horns, when really he's just an ordinary man with dwarfism. Cersei intentionally creates nasty rumors about her political rival Margaery Tyrell, torturing her friends into confessing to various crimes. Rhaegar Targaryen forcibly kidnapped Lyanna Stark according to her would-be husband, Robert, but it seems more likely that the two eloped.

And that's all without 10,000 years to distort things even more.

In the timeline of A Song of Ice and Fire, the Age of Heroes belongs to the hazy, distant past. The Targaryens have only been ruling in Westeros for about 300 years, and already they are subject to rumors and legends. Now, of course, the prequel series will take place towards the end of the Age of Heroes, when the world descended into the Long Night and White Walkers took over and everything was bad. That was 6,000 to 8,000 years ago, so... still a pretty long time to turn fact into fiction.

On the one hand, we know that White Walkers and the Children of the Forest exist in this world, so why not flying knights and gods and so forth?

But on the other hand, Martin loves to show us the way that facts can so easily transform into fiction. His series is about story-telling as much as it's about anything, and about which stories make it into the official scroll of history. So I'm willing to bet that absolutely everything we know about the Age of Heroes is false—in the same way that Tyrion is not really a monster, I don't think that the heroes of that gilded age were really chock-a-block full of magic. And I don't think that the White Walker invasion is going to be as simple as some bored ice demons with nothing better to do moving in on humanity. I mean, it might be, but that would be far from the most interesting option.

In setting this new series so impossibly long ago, Martin and Goldman have given themselves a pretty great gift: they can do whatever they want, because anything we've heard about this time period is 100% mythologized. They have, essentially, a blank canvas on which to reinvent Westeros entirely. Let's hope they make good use of it.

More like this
Viserys’ Fate On 'House Of The Dragon' Could Differ From The Book In This Surprising Way
By Grace Wehniainen
Nicola Coughlan Shared A Lady Whistledown Excerpt From ‘Bridgerton’ Season 3
By Grace Wehniainen, Alyssa Lapid and Sam Ramsden
You’ll Definitely Recognise Both Of Ty Tennant’s Parents
By Maxine Harrison
6 'Game Of Thrones' Halloween Costumes That Aren't Overdone
By Nina Kahn
Get Even More From Bustle — Sign Up For The Newsletter