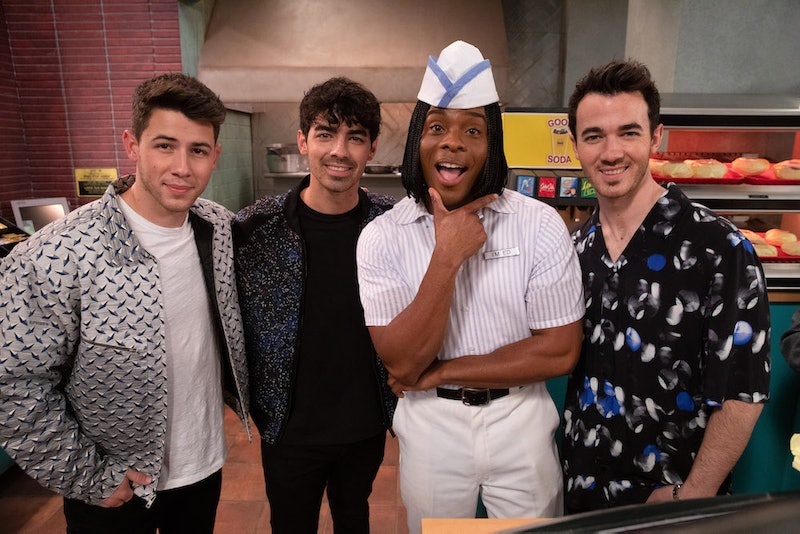 Back in February, to the delight of ‘90s kids across the globe, Nickelodeon announced a reboot of All That, the network’s iconic sketch comedy series. It was revealed at the time that the new version of the show would be executive produced by original cast member and current SNL star Kenan Thompson, and now, more pieces of vital information have emerged. As reported by People, the All That reboot will premiere on Nickelodeon on Saturday, June 15, and — to add to the hoopla of nostalgia news — the newly-reunited Jonas Brothers will perform on the episode.

The band took to Twitter on Tuesday, May 14 to confirm the very exciting news, releasing a video featuring them hanging out on the All That set. In the clip, Nick tells viewers, “We’re so excited. We’re going to be on the premiere episode of the all-new All That on Nickelodeon. On June 15!” The clip also includes a cameo from original cast member Kel Mitchell, who reprises his iconic “Good Burger” character. As all three Jonas Brothers give viewers an enthusiastic thumbs up, Mitchell pans into view.

As many will recall, All That aired for 10 seasons between 1994 and 2005 on Nickelodeon, serving as the network's longest-running series. The comedy's success led to a number of popular spin-off series and movies, including Kenan & Kel, The Amanda Show, The Nick Cannon Show, and, of course, the 1997 film Good Burger. The sketch show also catapulted the careers of many of its teen stars, including Thompson, Amanda Bynes, and Nick Cannon.

During its run, All That also featured musical guests such as Britney Spears, Aaliyah, Justin Timberlake, and Usher, so it's not a huge shocker that the Jonas Brothers will appear on the reboot's premiere. The band's been busy these days, ever since they reunited in February and released their first single in over six years, “Sucker,” a month later to major fanfare. Following the song's debut, the trio announced their first album in a decade, Happiness Begins, set to be released on June 7. The brothers are slated to hit the road for their Happiness Begins Tour this summer, which will begin in Florida on August 7 and finish in California on December 14.

In the June 15 premiere of All That, the Jonas Brothers are slated to conclude the show with a performance of “Sucker.” The episode will also feature appearances by original cast members Mitchell, Lori Beth Denberg, and Josh Server. According to a press release sent to Bustle, many classic roles and sketches — such as Mitchell in his iconic “Good Burger” persona, and Denberg in her “Loud Librarian” persona, as well as the return of her famed “Vital Information” segment — will be reprised in the reboot. Additional cast members and guest stars will also join the series, but will be announced at a later date.

All That premieres on Nickelodeon on Saturday, June 15 at 8:30 p.m, and if you were a '90s kid or just a love a good dose of nostalgia, you'll definitely want to tune in.

More like this
Netflix Reveals First Look At Wednesday In The 'Addams Family' Spinoff Series
By Bustle Editors
A New 'And Just Like That' Table Read Pic Confirms A Key Character's Return
By Jack Irvin and Grace Wehniainen
The Spice Girls Just Dropped A Brand New Music Video
By Sam Ramsden
24 Years Ago, 'Friends' Dropped Its Most Underrated Ross & Rachel Episode
By Grace Wehniainen
Get Even More From Bustle — Sign Up For The Newsletter