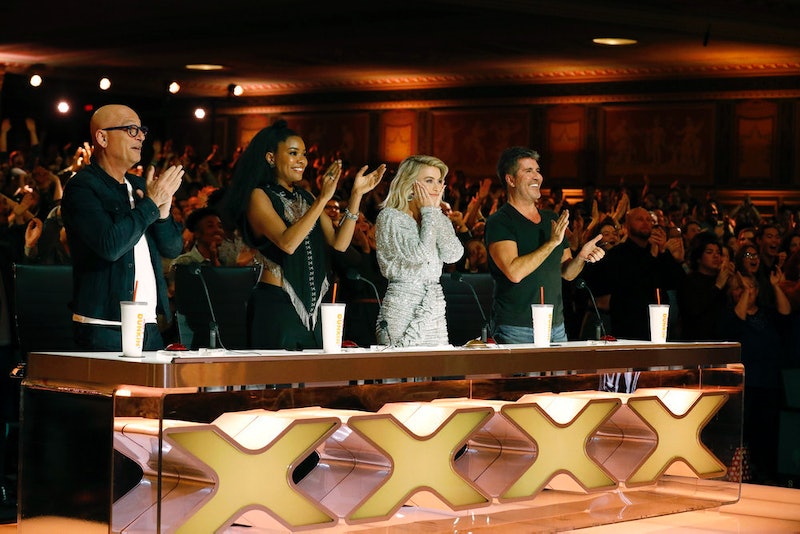 A new season of America's Got Talent always brings a new crop of contestants, but the 2019 AGT judges include a few fresh faces, too. The Season 14 panel features two judges new to the show (and a new host in Terry Crews, replacing Tyra Banks). It's a big change to no longer have Heidi Klum and Mel B hitting Xs after their six season run, but their successors will bring an exciting new dynamic.

Replacing Klum and Mel B are Julianne Hough and Gabrielle Union. They'll join longtime judge Howie Mandel (he's been there since Season 5) and Got Talent franchise creator Simon Cowell. Fans may be sad to see Klum and Mel B go, but it's understandable that they're just a little busy right now. Mel B is on tour with the Spice Girls (minus Posh) and Klum is working on an Amazon fashion series with her former Project Runway co-star Tim Gunn.

According to E!, NBC is thrilled to have some fresh blood on the judging panel, which hasn't seen a shakeup since Season 11. "We are excited to welcome Gabrielle and Julianne to the AGT family," Trish Kinane, Fremantle President of Entertainment Programming, said in a statement. "They are ready to bring a new level of expertise, energy, entertainment and fun to our judging panel."

"One of the many secrets to the success and longevity of America's Got Talent is its fearless drive to reinvent itself. The next evolution of the format brings in fresh expert eyes to join Simon and Howie on the panel. Gabrielle and Julianne are two of the most aspirational women in the business, on top of being electric entertainers with talent across disciplines. I am excited to see how their knowledge, compassion, and sheer joy enhance the experience for acts and viewers alike."

Hough is no stranger to judging panels. She judged Dancing With The Stars for several seasons, so she knows how to deliver constructive criticism. Her extensive background in dance is also exciting because it means she'll really know what she's seeing when the dance acts come out. Cowell knows singing and Mandel knows comedy, but the panel needed a dance expert. Neither Klum or Mel B could really fill that gap.

Union is new to judging, but she's had a long career in movies and TV, so she knows show business. She'll be helpful in determining which acts have that real onscreen star power. Union told KSL 5 that she wanted to be on the competition show because it was all about "watching people's dreams come true." She explained that she's been told no so many times in her own career, she wanted the chance to tell people yes for once.

The new AGT season starts Tuesday, May 28 at 8 p.m. ET on NBC. And while most viewers will be tuning in to see this year's stellar acts, they'll also be treated to a new judging panel with a fresh set of skills. It's sad to see Klum and Mel B go, but Hough and Union are worthy successors, and they're ready to make talented people's dreams come true.

More like this
‘RHOSLC’ Star Jen Shah’s Arrest & Legal Drama, Explained
By Brad Witter and Jake Viswanath
'RHOSLC’s Newest Cast Member Has Tried To Become A Housewife Before
By Jake Viswanath
Here’s What Went Down Between Romeo, Jill, & Kira Before 'Bachelor In Paradise'
By Grace Wehniainen
Why Did Lace's Fake Her Birthday On 'Bachelor In Paradise'?
By Kadin Burnett
Get Even More From Bustle — Sign Up For The Newsletter