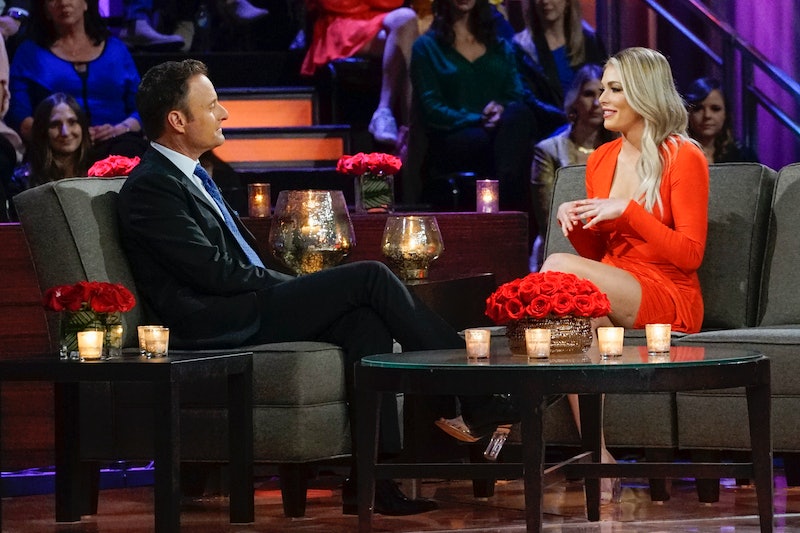 The Bachelor's final opportunity to have all of its contestants together came and went on Monday night. The ladies of Peter Weber's season didn't disappoint when it came to bringing the style. While all of their looks were different, the Bachelor contestants' PVC heels were a common theme. Whether they donned a ruched, red mini dress or a beaded, cut-out frock, acrylic heels were definitely the trend of the night.

Four different women who appeared on Women Tell All wore PVC heels. While there were slight variations on heel width and height, the clear shoe trend was prominently on display during the reunion special.

The most obvious pair was worn by final four finisher Kelsey who was not only seated on the front row, but also called up to have a one-on-one chat with host Chris Harrison (and receive a massive bottle of champagne from Ashely I.). She chose a PVC block heel with clear acrylic straps to go with her ruched red mini dress.

She wasn't alone. Other participants included Kiarra (of linger-y fame) and Katrina who was eliminated night one and the first woman to be introduced last night.

The best news, though, is that while the exact designer of their shoes aren't known, the shoe is totally on trend and easy to find at some incredible price points.

If these aren't Kelsey's exact heels, then they are basically as close as you can get. At under $70, they're a complete steal.

If you want something that feels a bit more sturdy than a mule, these under $50 heels are it.

If you're not into block styles but like the idea of a clear shoe, contestant Sydney participated in the acrylic moment by rocking a stiletto mule. This pair (and its incredible) price are great dupes for her style.

If you want to snag the acrylic heels from The Bachelor, there are plenty of options.

More like this
15% Pledge Director LaToya Williams-Belfort On The Impact Of Supporting Black Business
By Dominique Norman
Harry Styles’ Red Carpet Looks Have One Thing In Common
By El Hunt
Androgynous Formal Wear That Will Make You Feel *So* Fancy
By Megan Lasher
Dr. Martens’ New Collab Reimagines A DM Classic
By Frances Stewart
Get Even More From Bustle — Sign Up For The Newsletter