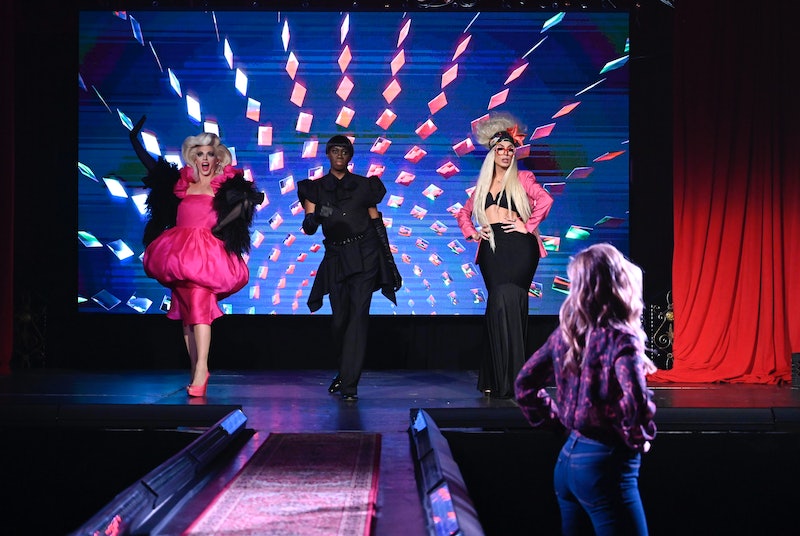 A talent show among Hannah's men definitely needed spicing up on Monday night, so when The Bachelorette and RuPaul's Drag Race crossed over, fans were all for it. In order to help the men put on a winning show, Drag Race's Alaska and Alyssa Edwards showed up to the Bachelorette set. What ensued was interesting, to say the least.

The Drag Race favorites didn't come alone — in an amazing nod to America's Next Top Model, catwalk master extraordinaire Ms. J. Alexander rolled in with them to school the contestants on how to strut their stuff. Plenty of people were more interested in J. and the queens than they were in the men who were trying their hardest to make a lasting impression.

That star power from the guests is not necessarily surprising — these men are trying to prove themselves for the very first time, but the guest stars are already show-stealing icons. If this is just the start of the celeb cameos The Bachelorette has lined up for this season, the men better be prepared to share the spotlight.

It's especially amazing when you think of all the unsuspecting viewers who have never seen Ms. J, Alaska, or Alyssa, and were simply bombarded with their fabulousness. Check out some of the reactions:

Alaska appeared on both Season 5 of Drag Race and the second season of All-Stars, and she did amazingly. She was the runner-up for Season 5 and won All Stars 2, so she didn't come to The Bachelorette to play. Alyssa appeared in the same exact seasons as Alaska, and though she didn't make it as far in the competition, she made quite the impression on fans.

People were not only enamored by the queens' appearance, but also by what they brought out in Hannah's men. There aren't any drag transformations, unfortunately, but still some notable moments. Fans are especially into how Mike reacted to this scenario. He was quick to put heels on and embrace his feminine side for the talent show, and absolutely rocked a pair of hot pink stilettos.

We stan a man who's comfortable with his femininity and breaking gender norms! It is much more attractive than the men who were clearly uncomfortable around the queens — some Twitter users also noticed that on the flip side, other contestants were pretty standoffish. Of course, maybe it's simply a new experience for them, and they would've warmed quickly if they had more time. These dates can go by quickly, after all.

Despite the power of the queens and Ms. J., the group date went completely off the rails when Luke P. dove off the deep end and told Hannah, in front of everyone, that he's already falling in love with her. He's been there for two days! Milk in my fridge is older than their relationship. Hannah was somehow swept off her feet by the declaration, but the other guys? Not so much. Bring on the drama, please.