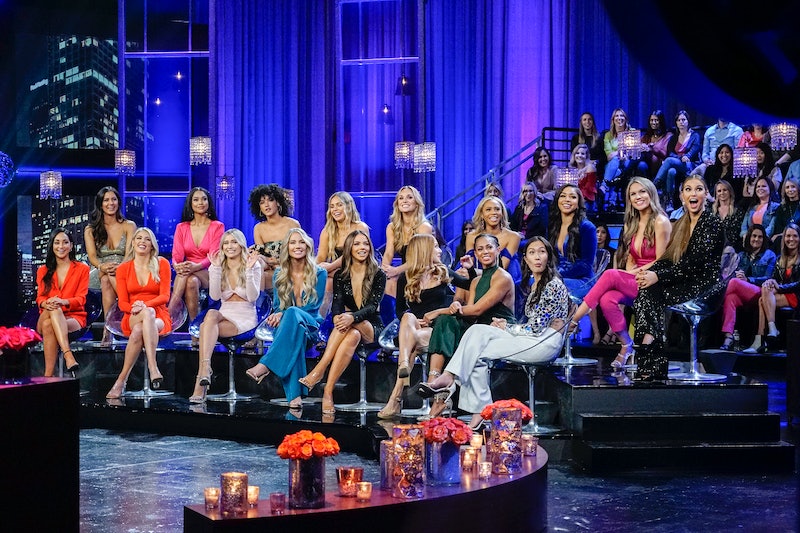 The Bachelor is coming to an end, but on Monday night, there was one more chance to see every (or nearly every) woman from Peter Weber's season together. When it came to their style choices, they didn't disappoint. The looks from The Bachelor's Women Tell All special features some standout jumpsuits, serious sequins, and a few matching shoe choices.

For those who haven't been up-to-date on Peter Weber's season on The Bachelor, the woman have been notoriously contentious with one another. They've battled it out over everything from the classic debate centering on who's there for the right reasons to the now iconic champagne gate. On the Women Tell All special, nearly the entire eliminated cast (some like Kelley and Natasha weren't in attendance) got to hash it out one more time.

While, of course, fans of the show were fixated on what the women had to say, the style moments were equally as thrilling. Current contestant Madison — with her sparkling jumpsuits and geometric earrings — may be making waves while she's still competing for Weber's heart, but her fellow cast mates each delivered one final on-screen moment to showcase their style. None of them disappointed.

Here are all the looks from Women Tell All.

While Katrina wasn't seen much on-screen at The Women Tell All, contestants took the opportunity to post photos of the afterparty last night after the show aired. Thanks to those images, fans were able to get a better look at Katrina's glittery and fitted gold spaghetti strap frock that was paired with PVC heels.

Maurissa had a seat along the top row of women which made her look hard to catch, but thankfully, much like many of the other contestants, she posted a video from the afterparty.

Her hot pink bodycon dress featured a plunging neckline and three quarter puff sleeves. Plus, Maurissa was kind enough to link out to her frock which is available now from BCBG Max Azria.

Alexa's off-the-shoulder, puff sleeve dress featured a floral jacquard pattern. According to the contestant's Instagram, the frock is from ASOS, but she has had it for "a while," and it's unfortunately sold out.

Kylie was another lady who uploaded post-filming photos, and her black mesh crop top and ruched pencil skirt was definitely one of the sexiest looks of the night.

Deandra was one of several women who chose to wear jumpsuits, and her velvet, royal blue piece with a tie waist and plunging neckline was a killer.

Like Deandra, Savannah chose a jumpsuit. The fuchsia piece featured a deep halter neckline with an open back and cropped pant.

Alayah was another woman who went the sparkly route, and she did it well. She chose a fully beaded black suit set with star earrings. If you love her galaxy-inspired accessory, she linked them on Instagram. They're from Three Bees Boutique.

Even if Tammy wasn't seated in the front row, she'd still be one of the most visible people at Women Tell All. Her shattered glass-inspired sparkling top and white trousers made her a definite standout.

Shiann was part of the jumpsuit crew, but for her look, she chose a deep hunter green piece with a high halter neck and open back.

Lexi was one of the other ladies in black, and she kept things minimalist in a long sleeve mini dress with a square neckline and ruffled hem.

Like Kylie, Sydney went ultra-sexy for the Women Tell All. Her beaded black mini dress featured a deep v-neck, long sleeves, and cut-outs on either side of her waist.

The final woman in a jumpsuit was Victoria P. She choose a long-sleeved teal piece with a deep v-neck line and slightly puffed shoulders.

Mykenna was the only woman who choose pink for the night, but she did opt for long sleeves like many others. Her mini dress featured a ruched skirt, knotted bust, and puffed shoulders.

Final four member Kelsey chose red for the evening in a plunging, fitted mini dress with a side tie and ruched skirt.

Victoria F. also chose rose red for the reunion show, but instead of a dress, the Virginia Beach native opted for a co-ord set of a cropped blazer and shorts.

While the contestants' time on the show may be coming to an end, they each went out with a fashionable bang.