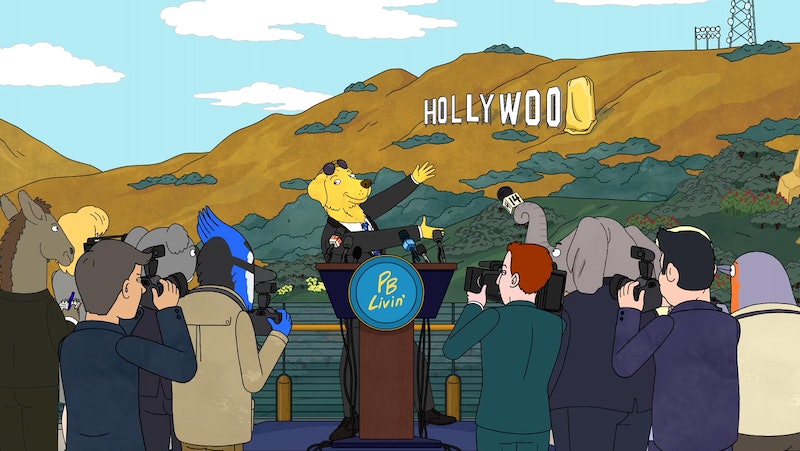 While the dark themes of addiction, depression, and trauma can sometimes distract from the fact, BoJack Horseman is a comedy at its core. The final eight episodes best honored that aspect by bringing back the best BoJack Horseman running jokes before the final send off. While Vincent Adultman devastatingly didn't receive a final cameo, here are some of the long-running gags of BoJack Horseman that got one last laugh in the final episodes.

Todd, Diane, and Princess Carolyn try to help BoJack figure out what story The Hollywoo Reporter journalists are investigating. As he brainstorms all of the bad things he has done in his life, BoJack's infamous sneeze on Oscar-winner Marisa Tomei gets one last shoutout.

Will Arnett's voice may be distinct, but BoJack likes to play it safe. A dejected BoJack only adds his first name when leaving unanswered voicemails to Hollyhock.

BoJack never wants the audience to mistake a flashback for occurring in the present day, so the show oh-so-subtly broadcasts what year the scene takes place in — like when Angela Diaz's fellow network execs leave her out of "a big '90s style birthday party ... it being the '90s and all."

BoJack holds wordplay to a high standard and Princess Carolyn doesn't disappoint with one of her patented word avalanches: "We need firm financial figures to frame how fans flock to flicks that flex chicks."

Esteemed character actress and fugitive from the law Margo Martindale makes amends for thwarting Todd's rock opera by reconnecting him with his mom for a final grift. While she seemed destined to return to prison, Your Otter graciously allowed Martindale to be free to collaborate with indie filmmaker Nicole Holofcener. If only she wasn't so good at acting!

Mr. Peanutbutter got as close as he's going to get to his Horsin' Around and Mr. Peanutbutter's House crossover dream in the first half of Season 6. But he references one of his favorite things when Diane compares her life to a puzzle — a crossover puzzle, that is — over the phone.

BoJack couldn't figure out the tone of the line "What are you doing here?" while filming Secretariat back in Season 2. The line followed him to the series finale when he asked his fellow prisoners, "What are we doing here?"

BoJack's mother made her disdain for Horsin' Around known by saying it, "It wasn't Ibsen" — an insult that stuck with BoJack. While this line didn't start as a joke, it becomes one once BoJack directs the Henrik Ibsen play Hedda Gabler in prison. Now that he's taken on the Norwegian playwright, BoJack says, "I mean, it's not Strindberg."

9. Hollywoo Stars and Celebrities: What Do They Know? Do They Know Things?? Let's Find Out!

Mr. Peanutbutter ends the series best-known for being Birthday Dad, but he recollects how he once was famous for being the finder-outer of what Hollywoo stars and celebrities know and whether they know things when he hosted J.D. Salinger's game show.

Mr. Peanutbutter continues to take credit for stealing the Hollywood "D" when he returns it for a Birthday Dad publicity stunt. But his favorite sign company lets him down again by creating a giant "B" instead of "D," thus ending the era of Hollywoo and launching Hollywoob.

BoJack never revealed what Mr. Peanutbutter's good friend Erica looked like, but "some noteworthy aspect of her character or presentation" did indeed distract him to leave BoJack's side at Princess Carolyn's wedding.

PC uses her wedding as a Hollywoob industry event for her new women-focused production company that makes movies like 11 Angry Women ("You gotta leave room for a sequel!") where she connects Jennifer Jason Leigh with regular Jason Lee.

After consuming his favorite snack of cotton candy, BoJack gave honeydew a chance at Princess Carolyn's wedding. His response to the fruit salad staple after years of rants? "Huh! Not bad."

If anything was redeemed in the BoJack Horseman finale, it was melon.