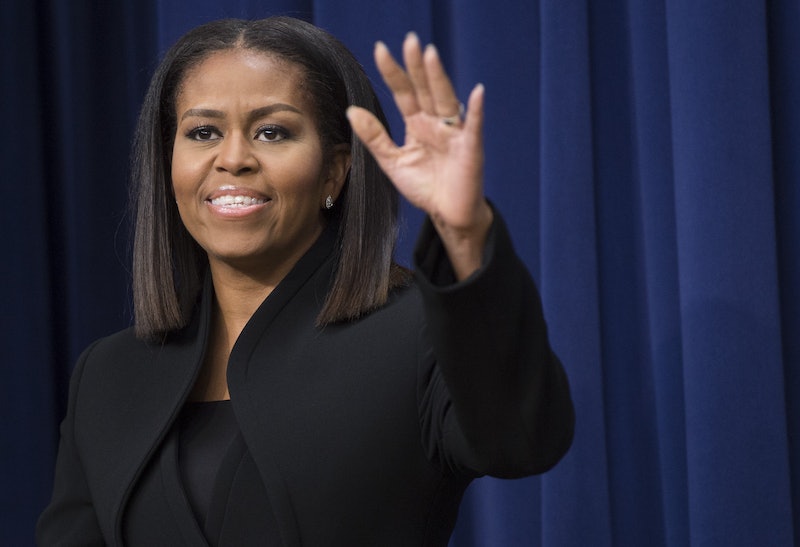 It's a new year full of new beginnings, but some things just shouldn't change — like Michelle Obama's way with words. During her eight years in office, the first lady has supported her husband's policies and stepped out on her own, leading her own initiatives for nutrition and girls' education, among other things. Along the way, she has chronicled her time in the White House through Twitter — and Obama's best tweets while in office are a prime example of what a country's leader should tweet.

The first lady launched her @FLOTUS Twitter account in 2012, as the president's bid for re-election approached. (She joined Snapchat in June — fittingly, on National Selfie Day and as she supported former Secretary of State Hillary Clinton's bid for the presidency.) Although not all the tweets from @FLOTUS come directly from the first lady herself, her staff is able to capture the messages she delivers in person and send them into the Twittersphere.

Those messages may seem all the more relevant in the new year, as the nation stands to welcome — reluctantly or otherwise — a new administration with what will almost certainly be new policies. Regardless of politics, Obama's tweets have filled the last eight years with uplifting messages. Oh yeah, and she's relatable to boot.

Mrs. Obama has been a powerful proponent of education throughout her time in office — which makes sense, considering she's as educated as it gets. She graduated from Princeton University and got a law degree from Harvard.

It's not just college: The first lady has advocated for the equal education of women around the world. She has an inspirational way of challenging her followers to see the world as it should be.

In 2016, you met the cultural phenomenon that is Lemonade. Meanwhile, Mrs. Obama carpool karaoke'd to Beyonce classics with James Corden. I'm not sure whether the first lady or Corden had more fun.

For campaigning purposes, the first lady used @MichelleObama for her tweets. One of the best parts of a tweeting first lady is the behind-the-scenes look at the presidency. On the campaign trail and in the White House, Mrs. Obama captured some of her family's greatest moments, bringing the presidency to life.

What does the first lady do on a calm Tuesday night? It's probably not that different from what you do on any given night. Even the first lady enjoys binge-watching her favorite TV shows.

Between Carpool Karaoke and her numerous appearances on the late-night TV circuit, it's clear that the first lady has a fun side. On behalf of children everywhere, thank you, Mrs. Obama, for supporting recess.

As first lady, Mrs. Obama hasn't just stood behind her husband's policies and decisions — she has given them her own spin. For instance, during the Obamas' historic trip to Cuba, the first lady spoke to the country's girls, fitting with her advocacy for healthy kids and educated girls.

It doesn't get much more relatable to the middle class than student loans. The Obamas' educations came at a cost, but the first lady knows college debt was never just their own problem.

It's no secret that the first lady has a huge platform for speaking and a wide audience to listen. Her voice has value — and she inspires other women to use theirs, as well.

Ultimately, the first lady's tweets rival her dancing skills. Whether she's encouraging young girls to speak up or sharing a sweet photo of her family, Mrs. Obama has spent the last eight years lifting the spirits of her audience. She'll have to give up the @FLOTUS handle in January, but hopefully her words won't stray too far.