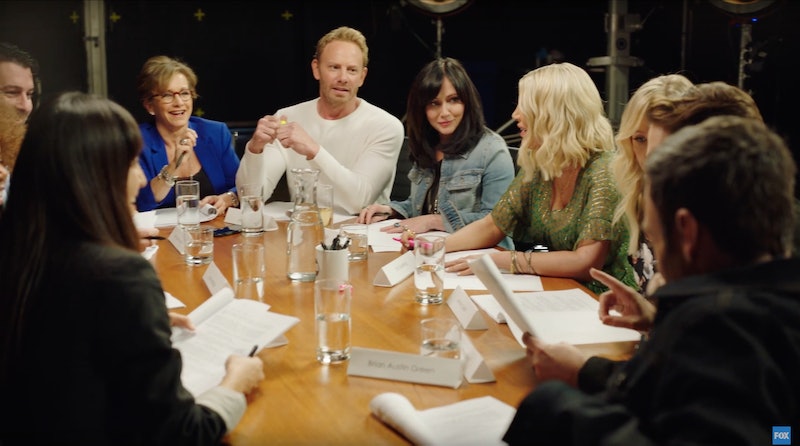 On Wednesday, May 8, Fox released the Beverly Hills 90210 revival trailer, teasing the cast's big reunion and it couldn't have arrived a moment too soon. The promo video, which shares the cast's first table read for their new series, BH90210, is extremely heartwarming, to say the least, as it features the crew embracing and greeting one another with Lenny Kravitz's "It Ain't Over 'Til It's Over" appropriately playing in the background.

It goes without saying that fans of the '90s series have been patiently awaiting this moment since the reimagining's exciting announcement earlier this year. The 90210 revival, which was revealed to be a six-episode series back in February, will be meta take on the show's original version and will feature most of the show's first season cast members including, Gabrielle Carteris, Shannen Doherty, Jennie Garth, Brian Austin Green, Jason Priestley, Tori Spelling, and Ian Ziering.

Despite being pegged as a revival by some, the new 90210 will not be a reboot, per se. Spelling, the daughter of the show's executive producer, the late Aaron Spelling, teased details about the mockumentary earlier this year.

Spelling, who is credited as co-creator of the series along with Garth, told E! News, "It’s not technically a reboot, because I feel like everyone has seen the reboot...what we’re doing is the entire cast is playing heightened versions of themselves.” She added, "Think Curb Your Enthusiasm episodes, in an hour-long show."

During a more recent interview with Entertainment Weekly that was shared on May 8, Garth clarified the show's narrative, saying,

"The premise of this show, it’s about the characters behind the characters. It’s inside the lives of people that lived in those shoes for those 10 years, and it’s about them coming back together. It’s really hard to do that show justice in a reboot, so we didn’t want to even try. We wanted to come at it with a totally different, fresh perspective, while still honoring the show."

Deadline noted that the revival would follow the show's original cast-members-turned-characters; Jason, Jennie, Ian, Gabrielle, Brian, and Tori as they come together to make a Beverly Hills, 90210 reboot happen. With this premise, however, the behind-the-scenes faux drama between the co-stars should become the real highlight of the series.

"What will happen when first loves, old romances, friends and frenemies come back together, as this iconic cast — whom the whole world watched grow up together — attempts to continue from where they left off?," Fox questioned in a Feb. press release shared by Entertainment Weekly.

It's safe to say that if showrunners should decide to go the "art imitates life" route in terms of the new series' storyline, there will definitely be no shortage of material to choose from. Many may recall that the stars had their fair share of real life drama during the show's original airing between 1990 to 2000.

While it's certainly amazing to see the gang back together again for the promo clip, it's hard to ignore the absence of Luke Perry, who suffered a massive stroke on the very same day that the initial reboot announcement was made, according to TMZ. Perry, who played the role of Dylan McKay on the original series, had not signed on to do the revived version and later died on March 4 at the age of 52.

It's immediately unclear whether or not the show plans to address his passing or how they will explain his absence. However, fans can expect the cast will more than likely pay respect to their longtime cast member in some way.

With an August 7 premiere date set, it's only a matter of time before fans will finally get to see the Beverly Hills gang get fully back into the swing of things.