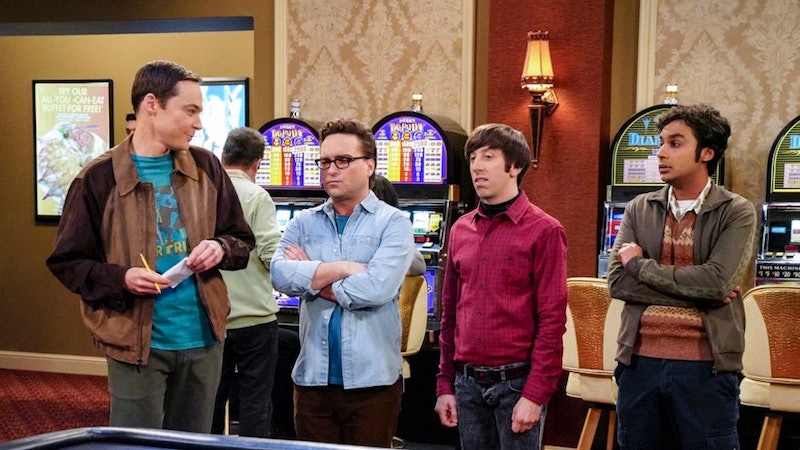 It may have all started with a big bang, but on Tuesday night the journey wrapped up in a mountain of tissues as tears as The Big Bang Theory cast taped their final episode ever after an impressive 12-season run. And since saying goodbye is never easy — especially when you're apart of something that lasted so long — things got pretty emotional for the core cast members, who took to social media to express their thoughts and feelings during this bittersweet moment.

Strangely enough, Tuesday was also the birthday of two members of The Big Bang Theory ensemble: Kunal Nayyar and Johnny Galecki, who posted their own tributes well ahead of the taping itself, though they were still in shock that the end was actually here. In fact, Entertainment Weekly attended the taping and revealed that Galecki shed a few tears right before shooting the final scene of the episode, telling the audience members, “This is a dream come true for all of us. You’ve been the best fans for 12 years. You are a part of a family, and we love you very much.” And just when you think it can't possibly get more heartbreaking, the Green Day song “Time of Your Life” played over the studio speakers during the final curtain call.

But even for those who weren't there to witness the historic event firsthand, the cast flooded their Twitter and Instagram accounts with photos of their last day accompanied by heartfelt sentiments that are guaranteed to hit you right in the feels.

Alongside the photo of Sheldon and Leonard's apartment door, Parsons wrote:

"Knock, knock, knock, thank you… Thank you, apartment 4A, for being a home to so many dreams come true, to so many friendships made. And thank YOU, ALL of you — yes, YOU, reading this right NOW! As we get ready to tape our final episode tonight, to walk in and out of this apartment door for the last time, it is hard to find the words to articulate what a profound experience this has been. But the words ‘love’ and ‘gratitude’ come to mind… so love and gratitude to all of you. ALL of you… ”

Galecki followed a similar photo approach as Parsons, though his caption was short and sweet: “More feelings than words can express.”

"Final bows tonight," one of Cuoco's photos noted in what was sure to feel like a bittersweet moment.

Rauch posted several photos on Instagram during their final day, but this group shot is an emotional gut-punch, especially since she captioned the photo with a simple: "Forever"

Nayyar's photo of this adorable group hug is almost as sweet as his message to the fans:

"Here we go," she captioned the photo of the WB water tank, which is located at Warner Brothers Studios, where the series has filmed for well over a decade.

Though he started out as a guest star, Sussman quickly became a pivotal (and comical) member of the cast. His Instagram tribute read as follows:

"Gonna miss napping next to @missmayim. We nap in adjacent dressing rooms, so we simulated what that would look like if you removed the wall. Did I mention that Mayim’s room is also where I’ve had some of my most productive psychotherapy sessions? Thank you Dr. Bialik."

Goodbyes are never easy, but if these photos are any indication, these friendships aren't going anywhere anytime soon.