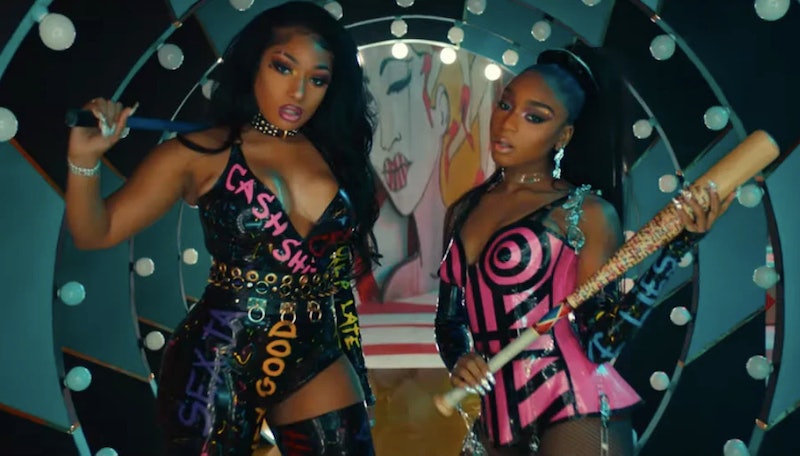 Much has been made about the female-heavy production of Birds of Prey. From the Margot Robbie led cast, to the incredible women behind the scenes — with this movie, the ladies are in charge. So it should come as no surprise that the Birds of Prey soundtrack features only female artists.

The all-female album, which was also produced by Robbie, is made up of songs by newcomers like Cyn ("Lonely Gun") and Maisie Peters ("Smile") as well as bops from some of your favorite musical acts.

The first track released from the soundtrack was Megan Thee Stallion and Normani's "Diamonds", complete with a Gentlemen Prefer Blonde inspired music video. Referencing Monroe's famous mid-movie musical number "Diamonds Are A Girl's Best Friend," Quinn and Stallion appear glammed up in Monroe's signature pink sheath, dripping with the title diamonds...cut between scenes of them beating up bad guys with a hammer.

When you have a singer in your crew, it's expected they're gonna show up on the soundtrack. And sure enough, Black Canary (Jurnee Smollet-Ball), one of the women who joins up with Quinn to fight megalomaniac villain Black Mask, gets her own track covering James Brown's classic "It's A Man's Man's Man's World".

The entire album's a lot like Quinn herself: eclectic, all over the place, but with a killer drive and sense of fun.