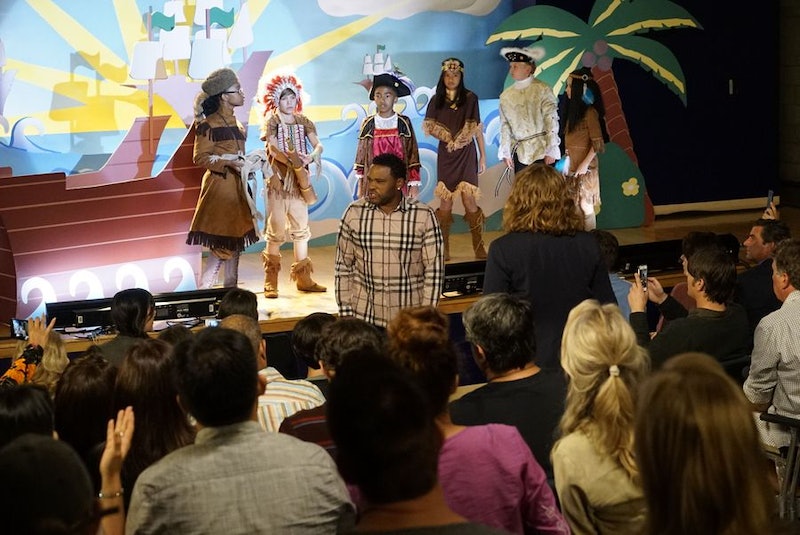 The first episode of black-ish Season 4 has a lot on its mind, and perhaps because of that, the show has a lot going on throughout its first half-hour of the fall. At the core of the episode, though, is the desire the Johnsons have to live their blackness more out loud, in order to better celebrate the huge milestones and achievements the black community, including Juneteenth, the anniversary commemorating the date — June 19, 1865 — when Black Americans were freed from slavery. And in order to make the point that we should celebrate Juneteenth as a national holiday, the episode also incorporates several Hamilton-inspired songs, including a little animated segment starring the (Legendary) Roots Crew as animated avatars (complete with a tiny, animated afro pick for Questlove) of enslaved Americans waiting for the news of the end of slavery to spread from the government to the people who were struggling underneath it every day.

But aside from that animated segment, which is a handy way to introduce the concept of Juneteenth to anyone who has never hear of it before, the musical elements feel slightly out of place. Perhaps that's because the Hamilton craze peaked at least a year and a half ago, or because the rapping peaks in the first instance of it, in the faux-Columbus Day pageant song where Jack and Diane share the edgy truth about the genocide carried out against the indigenous people living on the Caribbean islands when he arrived there. It's the episode's most aggressive clapback against the whitewashing of American culture, and when contrasted against the way the end of slavery is basically ignored now, the show makes a simple but very powerful point.

Singer Aloe Blacc helps shepherd the songs onscreen, and helps hand out helpful American history facts in Dre's office, which, as could have been expected, debates the usefulness of black liberation between jokes about Charlie's sketchy personal history (instead of attending high school, he learned all the skills necessary to forge resumes and college diplomas). It's nice to have a guest star with some pipes on board, but the skits where the Johnsons play an enslaved family mean than in an episode that's only 30 minutes long, there isn't much time for the actual 2017 Johnson family. They spend most of the episode reminding Dre that until he thought about the problematic elements of Columbus Day during the kids' pageant, their family never really considered Juneteenth a special day. If only the final revelation of the episode, in which Dre realizes that it's really the freedom to celebrate any milestone without needing white, mainstream cultural approval first, had been given a little more time to breathe.

The episode settles with the conclusion that if we can't rally the entire nation to celebrate Juneteenth as a bank holiday, then it should be treated with at least the same acceptance and reverance afforded to culturally specific holidays, worthy of a big family celebration with a barbecue, some strawberry soda, and red velvet cake. And, the episode suggests, perhaps, after some time, Juneteenth might become like St. Patrick's Day or, yes, even an alternative to Columbus Day.