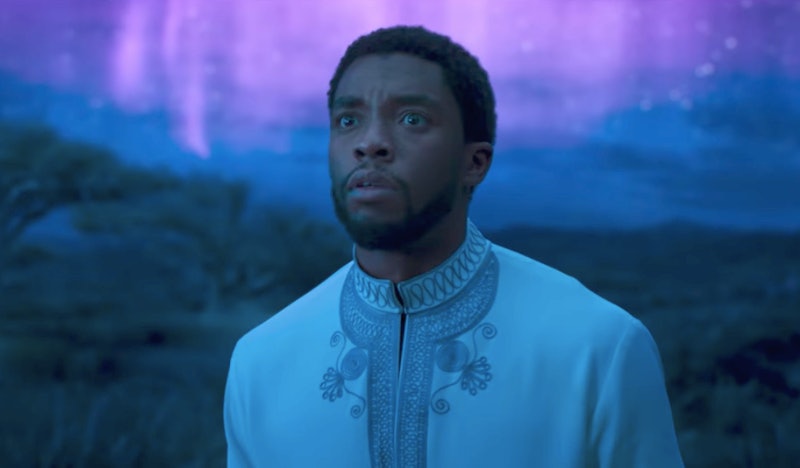 If you thought you were already excited about Marvel's upcoming Black Panther movie, then think again. The new Black Panther trailer has arrived alongside a new poster, and, even though the film hasn't come out yet, this trailer is enough to make it everyone's favorite Marvel movie ever. Seriously, fans are losing their minds, and you probably will too once you get a look at all this new footage. But just as amazing is the Black Panther trailer song, which adds one hell of an awesome backdrop to an already epic trailer.

In fact, it's not just one song, but two — and there seems to have been a mash up at play made specially for the trailer. The most easily identifiable of these is poet/musician Gil Scott-Heron's 1971 spoken word classic "The Revolution Will Not Be Televised." The Library of Congress has described the track as "one in which the founding modern strands and themes of rap and hip-hop can be heard," while the Huffington Post have described how the song's chorus "became an anthem for the black power movement." As such, in terms of timing (and themes, but we'll get there), using the vocals from this is ideal for a movie based on a character who, according to Screen Rant, first got his own series in 1973 in Jungle Action #5.

The second song is more subtly woven into the soundtrack: Vince Staples' 2017 track "BagBak." This intermingling of tracks works well symbolically, since the Marvel movie is updating the '70s comics for our time.

And obviously, in terms of themes, it also makes sense. Just like Scott-Heron's track, Staples is also concerned with what it means to exist as a Black person in the United States and how this overlaps with social (in)justice; just as the poet describes how, in the revolution, "there will be no pictures of pigs shooting down/brothers in the instant replay," the rapper describes himself or the song's persona as praying that "the police don't come blow me down 'cause of my complexion."

Which feels perfect for the movie. The Black Panther comic book series was not named after the political party of the same name since, according to the Encyclopedia Britannica, the character predated the founding of the party (according to Gizmodo, he first appeared in a Fantastic Four comic in April 1966). However, as Kotaku notes, the character was created to the backdrop of the Civil Rights Movement of the '60s and, as such, "it’s very plausible that The Black Panther was Lee and/or Kirby’s way of saying that a black person was as capable of being a hero as their white characters." As Kotaku also notes, many of the major storylines in the comic book focus on "social justice issues."

Staples' track also feels like a particularly neat choice in light of the larger album it forms part of. According to the Pitchfork review of Big Fish Theory, the 24 year old wrote of the album in a (since deleted) tweet, "This is Afrofuturism y’all can keep the other sh*t. We’re trying to get in the MoMA not your Camry." As Kotaku has observed, the fictional African nation T’Challa inhabits, Wakanda, "is shown as being ahead of much of the world with regard to technology."

This is interesting, since this suggests that to some extent, the comics fall under the umbrella of Afrofuturism, a term author Ytasha Womack defined to The Guardian as a "highly intersectional" way of looking at the future (or possible futures) through a Black cultural lens — though of course, it should be acknowledged that it's an extremely broad term and no one explanation of the word is definitive.

So, if you love the songs, hit play on the trailer one more time. The soundtrack isn't just catchy, but provides the perfect choice for a film focused on ideas of how to run a kingdom, justice, and Black identity.

More like this
Everything You Need To Know About ‘Black Panther: Wakanda Forever’
By Bustle Editors
Lego Just Announced Its 'Black Panther' Set Release Date
By Maxine Harrison
Christian Bale Sang With Taylor Swift & His Daughter Can't Believe It
By Radhika Menon
Snoop Dogg & Michelle Pfeiffer Lead Moving Tributes To Coolio
By El Hunt
Get Even More From Bustle — Sign Up For The Newsletter