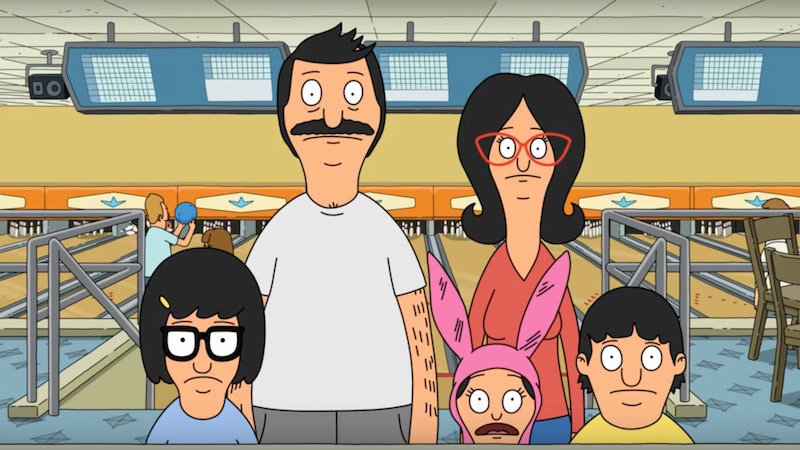 No ifs, ands, or butts (sorry, Tina Belcher) about it, the Bob’s Burgers movie release date has officially been declared. On Tuesday, May 7, Walt Disney Studios Motion Pictures unfurled its movie release schedule for the next several years, and that schedule just so happens to include the feature film based on an animated series about a family that runs a pun-lovin’, sweet potato fry-hatin’ burger joint. According to a press release obtained by Bustle, the Bob’s Burgers movie will be in theaters on July 17, 2020.

Much like a lie, the Bob's Burgers movie release date news is not a twist. (Oh, but it also is not a lie. It is neither a lie nor a twist. Just want to make sure that is clear. Sorry if that particular Bob’s Burgers reference made things murky.) Back in October 2017, Deadline reported that the Bob’s Burgers movie would be out on July 17, 2020. And what do you know, it looks like they are sticking to that original schedule like Sticky Sugar Booms to teeth. So mark your calendars... again. Bob, Linda, Tina, Louise, and Gene Belcher are still headed to the big screen next July.

Currently in its ninth season, Bob's Burgers has racked up awards, critical acclaim, and fans. Lots and lots of fans. And whether or not they knew about the movie (or knew about it at one point but then forgot about it) before Disney dropped the schedule on Tuesday, fans near and far are raising their margaritas on the rock rock rocks with salt around the rim rim rim to the release date announcement.

Don't tell me not to have a crap attack.

Cheese Louise, this is going to be good.

It's OK if you didn't know until today. Better late than chive-er. (Eesh, I really should leave the food puns to the professionals. And by professionals, I mean the brilliant folks behind Bob's Burgers.)

The puns! The musical numbers! The Linda-isms! All on the silver screen! It's going to be so beautiful!

So beautiful, and so slightly greasy. When the movie news first broke back in October 2017, series creator Loren Bouchard told Deadline that they are "thrilled to be invited to bring Bob's Burgers to the big screen." He continued,

“We know the movie has to scratch every itch the fans of the show have ever had, but it also has to work for all the good people who’ve never seen the show. We also know it has to fill every inch of the screen with the colors and the sounds and the ever so slightly greasy texture of the world of Bob’s – but most of all it has to take our characters on an epic adventure. In other words, it has to be the best movie ever made. But no pressure, right?!”

Ugh, I cannot wait to see this in theaters. I'm going to be like Bob Belcher at a "Cake" performance.