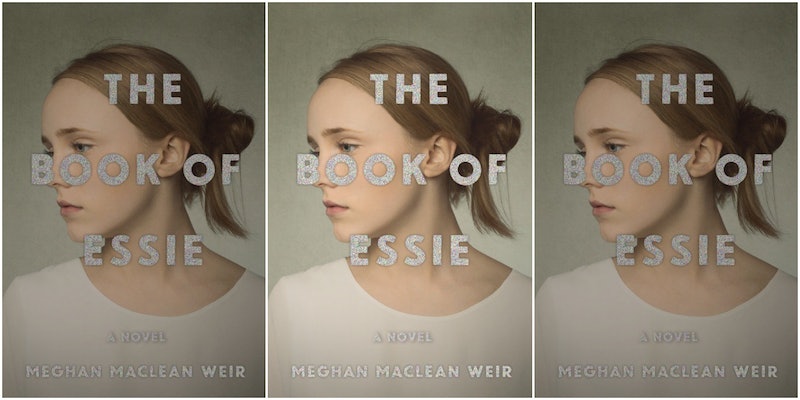 I have a confession: I am not a fan of reality television. I'm not a part of Bachelor Nation, I can't tell you which of the Real Housewives is the best, and I've never been able to keep up with the Kardashians. But just because I don't tune in every week doesn't mean I don't know all about these shows or the celebrities they create. Their stories dominate the headlines, rule over the social media, and appear on cable news, almost around the clock. The truth is, we live in a culture where the line between life and entertainment, reality and scripted TV, is more blurred than ever, one in which a former reality-television star was able to win the presidency. That is what makes Meghan MacLean Weir's novel The Book of Essie such a fascinating read: it takes you behind-the-scenes of a fictional reality-television empire and explores how our cultural fascination with fame, celebrity, and media.

The youngest child on the reality television sensation Six for Hicks, Esther Ann Hicks has spent her entire life in the spotlight. From her first steps to her first bra — which her father, an evangelical preacher, took her to buy in order to make him more endearing to viewers — every moment of Essie's existence has not only been broadcast for all the world to see, but carefully planned and scripted to maximize ratings and increase viewership. While there are plenty of people who loathe Essie's family for their ultra-conservative views and their fire-and-brimstone approach to religion, there are even more who idolize them and tune in every week to watch their church services, family dinners, summer vacations, and more.

“Recently I've tried to dissect this improbability, but when I was growing up, I never really wondered why the show became so popular," Essie explains early on in the novel. "Contrary to what some left-wing bloggers might say, this wasn’t because I am at all conceited. It was because I lacked perspective. Mother said we were Called to lead by example, and the capital C hung in the air like something holy. So I believed her. I didn’t know any better.”

But after she gets pregnant and her mother calls an emergency meeting with the show's producers to discuss how to best avoid a media nightmare — finding the teen a husband, and fast — Essie can no longer ignore the hypocrisy of her family's carefully crafted image or the damage it continues to cause, and decides to take matters into her own hands.

The Book of Essie by Meghan MacLean Weir, $16, Amazon

Knowing the only way out, the only way to protect herself and her baby (whose father remains a secret for most of the novel) from the life she was forced to live, is with help, Essie sets her sights on Roarke Richards, a senior at her high school who is as desperate to leave their small town as she is. Skeptical at first, Roarke agrees to marry Essie, a girl he barely knows, after finding out the deal includes enough money to get his parents out of debt and pay for college. With the wedding scheduled, Essie enlists the help of reporter Liberty Bell to help sell her Roarke's fake love story to the world — but that isn't all she wants Liberty to do.

Three years earlier, Essie's older sister left home, and she wants Liberty to find out the real reason she never came back. Once the truth about her family is uncovered, Essie wants Liberty — who was, in another life, an infamous, ultra conservative blogger with a dark past of her own — to help her tell the world the real story with a tell-all book. The only question is, what price is she willing to pay, and who is she willing to hurt, in order to publish it? Her family may be to blame for a lot of hurt, but can Essie bring herself to destroy everything they've built?

Families are always complicated, but there are few as labyrinth-like as the Hicks. Over time, as their fame and fortune grew, they — particularly Daddy and Mother Hicks — built impenetrable walls around the family's image, but it wasn't to keep the pain or danger outside world away, not really. It was to keep their own dirty secrets hidden, to keep the hurt locked in.

In its portrayal of the Hicks family, The Book of Essie asks that we look at the burdens we expect daughters to bear, and the free passes we give to sons. As Essie explains:

“The boys were always allowed to be boys. That was a precedent that was set early on, when even David and Matty were still around most of the time. They would come and go from college, but they were usually home on weekends to drop off a hamper filled with dirty laundry or eat an entire refrigerator full of food. They had the run of the house. They were kings of the castle. They were not ever once told no. It was different for Lissa and me. We were made to do the chores that our brothers skipped out on, no matter what their reason. We picked up the slack. We covered. We bent ourselves at their wills.”

The Book of Essie alternates between the perspectives of Essie, Roarke, and Liberty to slowly reveal the truth about Essie's pregnancy and the dark secrets her family works tirelessly to protect. The result is a gripping page-turner that will have readers rooting for Essie's freedom, and her baby's safety, at ever surprising turn. But what The Book of Essie offers readers is more than entertainment. It offers us a chance to explore our deep-rooted obsession with fame and celebrity, with reality television and its stars. The novel forces us to ask what role we play in creating them, and in turn, what responsibility we have for any pain or trauma they might cause.

Like the tell-all book Essie and Liberty want to write about the Hicks family, The Book of Essie pulls the reader in "to remind them of the ways they’ve been complicit in what happened by watching Essie’s family on television all these years.” Because, whether we watch reality television or click on the endless headlines it generates, haven't we all been at least a little complicit?