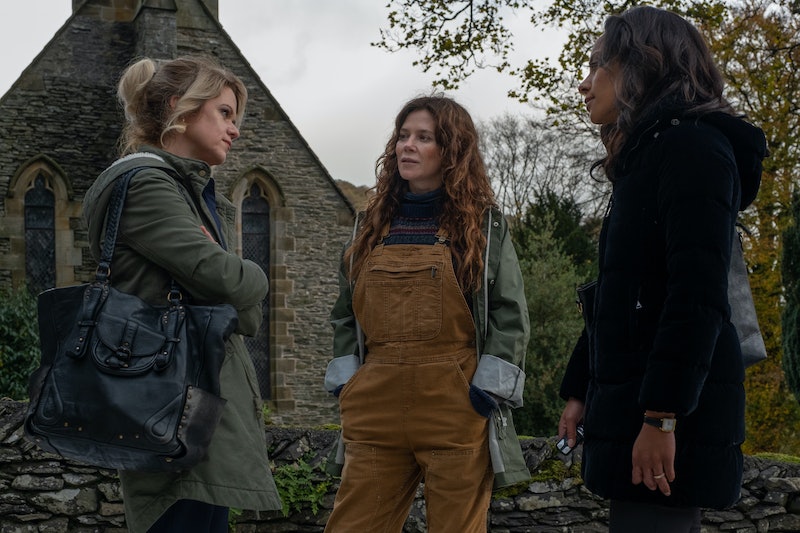 ITV is absolutely smashing it at the moment when it comes to dramas inspired by best-selling literature. Hot on the heels of the announcement of Sandition, the network is premiering Deep Water, which has some serious literary roots. And if you're one of those people who likes to read the source material before moving onto the for-screen adaptations, then you better start swotting up on the books that Deep Water is based on, because there's two to sink your teeth into. And they're lit (rature) AF.

Deep Water is based on two novels from the The Windermere Series by critically acclaimed author Paula Daly, who lives in the Lake District (where Deep Water is set) with her three children, husband, and dog Skippy, according to her Penguin Books bio page.

The two novels — Just What Kind Of Mother Are You? and The Mistake I Made — were adapted for screen by the BAFTA-nominated wrier Anna Symon.

So, what actually goes on in these two books? Well, according to Penguin, Just What Kind Of Mother Are You? centres on the character of Lisa, a busy mother of three. One day in "freezing December," Lisa "takes her eye off the ball" and, as a result, thirteen-year-old Lucinda goes missing while in her care. The bio continues: "Wracked with guilt over her mistake and after being publicly blamed by Lucinda's family, Lisa sets out to right the wrong. As she begins peeling away the layers surrounding Lucinda's disappearance, Lisa learns that the small, posh, quiet town she lives in isn't what she thought it was, and her friends may not be who they appear, either."

The Mistake I Made, on the other hand, focuses on Roz, who is "a single mother, a physiotherapist, a sister, a friend," according to Penguin. "She’s also desperate," they write. The bio continues: "Her business has gone under, she’s crippled by debt and she’s just had to explain to her son why someone’s taken all their furniture away. But now a stranger has made her an offer. For one night with her, he’ll pay enough to bring her back from the edge."

As Head of ITV Drama Polly Hill explained when Deep Water was first announced, Symon wove together these two novels "to create a wonderful modern and layered series." The ITV series will feature Lisa and Roz, and also the character of Kate, a "wealthy and attractive" woman "with a well-drilled and highly organised family life." As ITV explains, Deep Water is "about three very different women on their own incredible and often shocking journeys, whose lives connect at the school gates. It’s funny, sexy, truthful and often outrageous, and should have the audience asking what they would do to hold their own family together."

In a statement sent to Bustle UK, Symon explained what drew her to this project, and to Daly's books in particular:

“Just What Kind Of Mother Are You?, the title of Paula Daly’s break-out novel, speaks clearly to me as a parent as well as a writer. As soon as I started reading the novel, I could see that Lisa ... and her preoccupations — am I raising my children well? What is their impact on my life? — were very relatable. Not just to me, to all parents. What I didn’t expect, as I turned the pages, was that a careless mistake that Lisa makes early on in the book would turn a relatable, family story into a twisty-turny, emotional thriller. I was hooked. That was three years ago. And, since that first read, together with production company Kudos, I have been on a thrilling journey to adapt Daly’s work and create Deep Water."

Symon explained that the team started with Just What Kind, but then "decided to weave a second of Daly’s Lakes-set novels The Mistake I Made" in order to "create one ensemble cast, whom an audience would (hopefully) fall in love with and want to return to." She continued: "Although each novel has its own set of characters and plot, detective Joanne Aspinall features in both books. So, although this is by no means a police procedural show, Joanne became a key link between our stories. We were off."

I for one cannot wait to sink my teeth into both the books and the TV show. Now all I need to do is cancel my evening plans for the next few weeks...