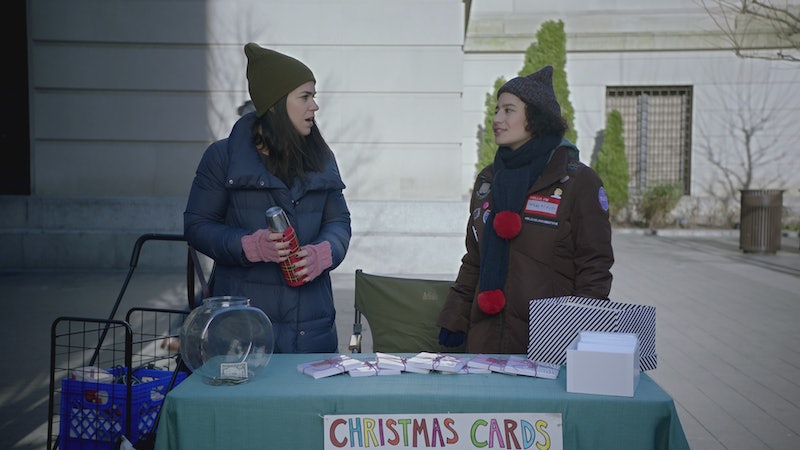 While you probably wouldn't go so far as to say that the Broad City episode "Witches" is a Halloween special, there's no denying that there's something magical about it. That's because Abbi and Ilana honor the power of women during the Oct. 25 episode by tying it back to the occult. It all begins when Abbi finds a gray hair and Ilana and Bevers proclaim that she's becoming a witch. Although she's horrified at the sign of growing old, Abbi discovers — with a little help from special guest star Jane Curtin — that being a witch is an incredible thing. And after Ilana prevails over feeling sexually suppressed by a certain bleep-worthy president, she comes out on the other side stronger than ever. So sure, "Witches" doesn't take place on Oct. 31, but the Broad City episode inspires women to embrace their supernatural abilities this Halloween and every other day of the year.

Abbi's storyline is responsible for the joyous nighttime celebration of witchy women at the end of the episode, but it's Ilana's plot that shows how important it is to embrace womanhood in the current political landscape. While Ilana was unable to become aroused during a threesome earlier in Season 4, she reveals that she actually hasn't orgasmed for months. When she visits a sex therapist, she realizes that this inability started the night that Donald Trump was elected president. And in a scene that could only happen on Broad City, she overcomes (pun totally intended) the misogynist president by reflecting on phenomenal women in order to achieve an orgasm.

Ilana's sexuality defines much of her personality — as she says, "C*m is a lot of who I am. I'm a c*m queen." And Trump's sexist rhetoric about women literally stopped her from being able to express herself this way. Her sex therapist Betty (guest star Marcella Lowry) tells Ilana, "You're traumatized by the fact that a sexual assault-bragging, steak salesman has become our president." But just because he was elected into office and has the authority to push sexist and harmful legislation doesn't mean that Trump can take away everything that gives women joy. With Betty's help, Ilana proves that by bringing back one of her most defining characteristics — that she loves to orgasm.

Although it is very easy to feel defeated as a woman during Trump's presidency, Broad City shows that it doesn't have to be all doom and gloom. History teaches that women have not been treated equally by men for almost all of humanity, but "Witches" specifically notes persecution through witch hunts. Ilana references the Salem witch trials not only when she mentions The Crucible, but when she says that witches are really just women and that people want to set them on fire because they're jealous. Using this mindset, you can use patriarchal oppression as a way to empower and fuel you. Because you should feel confident and empowered since centuries of sexism hasn't stopped women from achieving incredible things — and Donald Trump won't either.

If you need proof of that, Broad City provides it with a showcase of groundbreaking women shown in Ilana's orgasm vision and the end credits. When you combine these two montages, the episode features more than 50 great women. While this is far from an exhaustive list, Rosa Parks, feminist activists Gloria Steinem and Dorothy Pitman Hughes, football official Sarah Thomas, baseball player Toni Stone, the first woman astronaut Sally Ride, Indira Gandhi, Ruth Bader Ginsburg, Malala Yousafzai, Amelia Earhart, and Elizabeth Warren are just some of the highlighted women.

On the entertainment side, guest star Curtin gets a moment with her Saturday Night Live costars Laraine Newman and Gilda Radner and they're joined by people like Dolly Parton, Oprah Winfrey, Lucille Ball and Carol Burnett, Jennifer Lopez, Björk, Emma Watson, and Beyoncé. Then, there are the casts of Girls, Girlfriends, Sex And The City, Living Single, and (they saved the best for last) Golden Girls. But it was all kicked off by none other than Michelle Obama and previous Broad City guest star Hillary Clinton.

If seeing all of these tremendous women flash before you on the screen is intimidating, well, "Witches" also sends the message that women should love themselves. Greta Lee's dermatologist character Dr. Fuller acknowledges that women feel pressured to be beautiful all the time. Abbi herself gets a Botox procedure, but regrets it when she remembers she actually likes the way she looks. And even though Botox isn't for Abbi, Broad City gives a fairly non-judgmental take on cosmetic enhancements since Ilana later admits that if she wanted to get Botox, she would. Plus, Abbi decides to color over her gray hair.

The episode is packed with its pro-female messages, but there's one last, essential element that deserves recognition. Although Ilana has a nightmarish flash of "Women for Trump" signs, "Witches" gives examples of women supporting women. After all, "witches have to have each other's backs." Each of the three main women who are introduced in the episode — Curtin's Margo, Lowry's Betty, and Lee's Dr. Fuller — are generous and kind to Abbi and Ilana. And the Broad City women, of course, pay it forward. So it's only right that all five of these women celebrate their witchy womanhood together by ringing in the winter solstice.

Abbi Jacobson directed this episode, but it should be noted that a man, Gabe Liedman, wrote it. Because men can — and should — acknowledge the power of females too. So even if you've been in a feminist funk since the 2016 presidential election, go howl at the moon this Halloween or this winter solstice with period blood smeared on your forehead (errr, OK, maybe not the latter part).

No matter how you do it, take pride in being a woman because there is something so enchantingly special about being female. And while you're at it, continue making strides to obliterate that glass ceiling, and to grasp tightly to the freedoms that the Trump administration wants to take away.