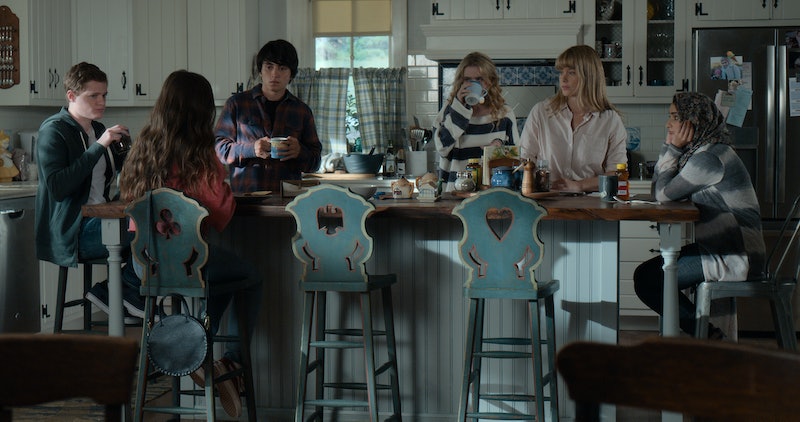 Spoilers ahead for Season 1 of The Society. After you get done watching Netflix's new mystery-drama, The Society, you're going to have a lot of questions. By the end of the show's first season, we still don't know much about where the kids are or how they got there, but the bus driver on The Society might be the key to solving the puzzle.

Some background: the series centers around a group of about 150 or so teenagers who return home from an abruptly canceled school trip to find their town of West Ham completely empty. Their families are gone, Wi-Fi and cable TV are down, and even calling 911 doesn't help them reach anyone beyond the city limits. They can't just leave to get help, either — all roads out of town have been cut off by a thick, apparently endless forest that sprouted up overnight. But the kids aren't about to resign to this new reality. They're determined to get to the bottom of what happened.

Given that the bus driver is the one who ferried the group back to this empty shell of a neighborhood, and is the last adult anyone saw before they realized something was wrong, it's frankly a little odd that no one thinks to bring him up until they've been alone for months. But they do eventually remember him, and not just because he was their last point of contact with the outside world.

Before their lives were turned upside down, Kelly and Harry saw the bus driver arguing with Harry's mom, Sam's dad, and some other officials. They didn't have any clue who he was at the time, but now that they've made the connection, things are looking weirder than ever.

Sam says he's figured out that the man's name is Pfeiffer, and that he had something to do with getting rid of the bad smell plaguing the town. The details are murky, especially after Campbell forced Sam to destroy the documents, but apparently there was a $1.5 million contract involved that Sam's dad and uncle refused to pay.

So is the bus driver a bad guy taking revenge on the kids of those who blew him off and didn't pay up? That seems pretty severe, but there definitely appears to be some bad blood between him and town officials. Another theory that's also plausible? The kids' arrival in this alternate reality was actually planned as a twisted social experiment by the government, and the bus driver was working to stop it. When he was overruled, he disguised himself as the bus driver to try and keep an eye on them as things unfolded.

If that's the case, he's not doing a great job supervising them — two of the New Ham residents have died by the end of Season 1, and things are only further deteriorating. If the bus driver stuck around to protect them throughout whatever's happening, he's inarguably failed. Whatever the case may be, though, he knows something about this alternate universe, afterlife, or whatever they're dealing with. He got them in, and one way or another, he might be the one to get them back home.