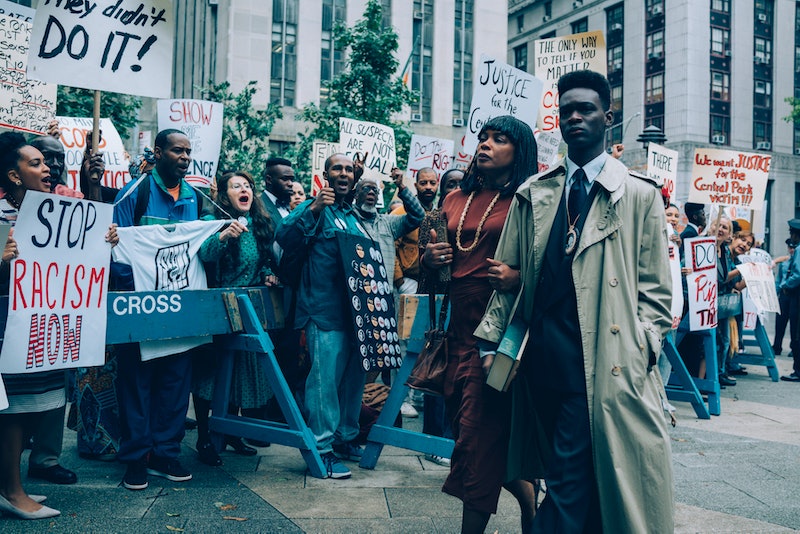 There's not much room for error when you're young and Black. We’re taught this before we can barely stand. Instead of receiving messages like "boys will be boys" and "girls just wanna have fun" as we grow up, our parents drill us with warnings that are generations old, like "stay out of trouble" and "don't get caught in the wrong place at the wrong time." When five teen New Yorkers were accused of raping a 28-year-old jogger in Central Park in May 1989, the warnings then had a point of reference — particularly with regard to the unsettling consequence of not heeding them. Because when you're a child of color, being in the wrong place at the wrong time can literally cost your freedom.

The five teens were coined the "Central Park Five," that year, and they were wrongly convicted for the rape of Trisha Meili, who became known as the Central Park Jogger, and spent from six to 13 in prison. But 30 years later, Ava DuVernay’s limited series on Netflix, When They See Us, out on May 31, aims to disband the misconceptions of the “Central Park Five” by bringing their humanity to the forefront. The project gives viewers the chance to learn about the men — Raymond Santana, Kevin Richardson, Antron McCray, Yusef Salaam, and Korey Wise — whose lives were upended all those years ago.

Bustle spoke with the cast of When They See Us in New York City, and although the teens who’ve taken on such massive roles weren't even alive in 1989, the notion that they too could experience such a fate even in 2019 is not lost on them. “My mom knew the reality of growing up as a kid of color in this city. And I think she wanted me to be well-informed about the miscarriages of justice that can happen here," Marquiz Rodriguez, who plays young Raymond Santana, tells Bustle. "And it’s just the burden that kids of color have to carry. We are somehow made responsible for that awareness.”

The teen actors immediately acknowledge that When They See Us has nothing to with starring in "roles of a lifetime," because the men they are portraying are not simply characters. “These are real people who really went through this and this is an experience that they actually had." Caleel Harris, who plays young Antron McCray, explains to Bustle. "I can never imagine going through this myself, and being by myself. And it's just knowing what they went through. It sticks with you. And it resonates with you, and it marinates in you.”

To really get to know the men touted as the Central Park Five beyond old news reports, and even beyond award-winning director Ava DuVernay's script, the cast spent time with the men they portrayed. The teen actors made it their responsibility to capture their humanity, which was DuVernay's essential mission with the project. “Ava always describes Kevin [Richardson] as a big teddy bear, because you always want to hug him,” Asante Blackk, who plays young Richardson in the series, shares. “He had so much more going on for him. So many more aspirations, he wanted to play trumpet — he was pretty good at it, too."

And Ethan Herisse, who portrays teen Yusef Salaam, got to know Salaam for his advocacy work as a motivational speaker. “He's come out of the situation, and he's used his voice that was taken away from him when he was a teenager to inspire and motivate others and shed light on this injustice,” he says. “And that in and of itself is inspiring, just for them to come out as strong as they are, as wonderful as beautiful as they are ... it's incredible.”

DuVernay spends the last episode of the series on a sharp, unsettling account of Korey Wise's time incarcerated. Wise was the only one of the five to be tried as an adult, and endured solitary confinement throughout his 13-year sentence. He even spent time in New York's controversial Riker’s Island jail complex, similar to Kaleif Browder, a 16-year-old Bronx teen accused of stealing a backpack almost 20 years later. Jharrel Jerome portrays Wise throughout the series, bringing to the screen a child being brutalized in multiple correctional facilities. Yet still, Wise is open and hopeful for any bit of kindness shown to him. In one scene, Korey tells a guard, “I like when you call me kid,” a last-minute add-in from DuVernay. "I'd probably shot about eight scenes, and they had all been alone. They had all been in solitary. They had all been me in the room staring at the floor, hot in the cell," he says. "And finally at the end, I share a scene with a white officer. And I actually genuinely felt like he was the only friend of mine there on set that day. Out of nowhere I'm looking up, feeling like a kid through this little hole, talking to him. And I'm sure Korey held on to anybody who gave them the slight hello."

While When They See Us revolves acutely around the young men's harrowing experiences, it also focuses on the adults who tried desperately to keep them from conviction and supported them throughout their sentences. Joshua Jackson, who stars as defense attorney Mickey Joseph, was immediately struck by the tender ages of his young actor counterparts. "I read the age, I had gone through the informational package," Jackson says. "I looked at the kids, but until I was physically in the room, sitting next to these young men, I don't think I had recognized just how impactful, like how egregious that wrong is. I mean, it would have been wrong at any age."

Jackson also believes that When They See Us will undoubtedly introduce the events of May 1989 to a new generation, though it is a stark reminder that we all should still be paying attention to these injustices today and how they affect Black and brown communities, no matter our background. "We just have to put the racial component onto it," he says. "Because those kids were [considered] guilty before they woke up that morning. And it is, unfortunately, as dark as that. So that was the conversation then. And I don't think we're that far from that narrative now."

This is an emotional telling of the damage that gets done to individuals, to their families, to their communities, and brings me, a 40-year-old white man, into a home that I recognize.

When They See Us is a stark reminder that even though we're 30 years removed from the events that happened at Central Park in 1989, the same injustices and bias, unconscious or otherwise, are still apparent. And Wise's story, in particular, reminds us that there is much to be done when it comes to prison reform and standing up for the wrongfully convicted. Niecy Nash, who stars as Korey Wise's mother, Delores Wise, is dedicated to making change. "I said my work is done, now begins my service," she tells Bustle. To put what she's learned into practice, Nash became an ambassador for the Innocence Project. "I showed up to the first event, and they say how many people in this room have been wrongfully convicted," she shares. "And when the people raise their hands and all stood up, it looked like the UN. The wrongful conviction part is a universal issue. Because if you're poor and innocent more than likely you plea, because you don't have the resources to fight."

When it comes to making any change, awareness is key. And Jackson believes that the work must be done by allies, which makes it all the more important for those who are unfamiliar with the Central Park Five case to pay close attention to When They See Us, and realize it's still happening present day. "This is not an intellectual conversation about racial politics and social justice," Jackson says. "This is an emotional telling of the damage that gets done to individuals, to their families, to their communities, and brings me, a 40-year-old white man, into a home that I recognize. Our broader national narrative is so much about the divisions between you and me. And now I go inside of this house. I could have grown up there."

More like this
Bustle Daily Newsletter: October 4, 2022
By Hayley Schueneman
Stormzy Made A Passionate Speech About The Importance Of Diversity
By El Hunt
Pro Footballer Zander Murray Is "Blown Away" By Support After Coming Out
By Sam Ramsden
12 Must-Watch Documentaries To Honour Black History Month UK
By Sophie McEvoy
Get Even More From Bustle — Sign Up For The Newsletter