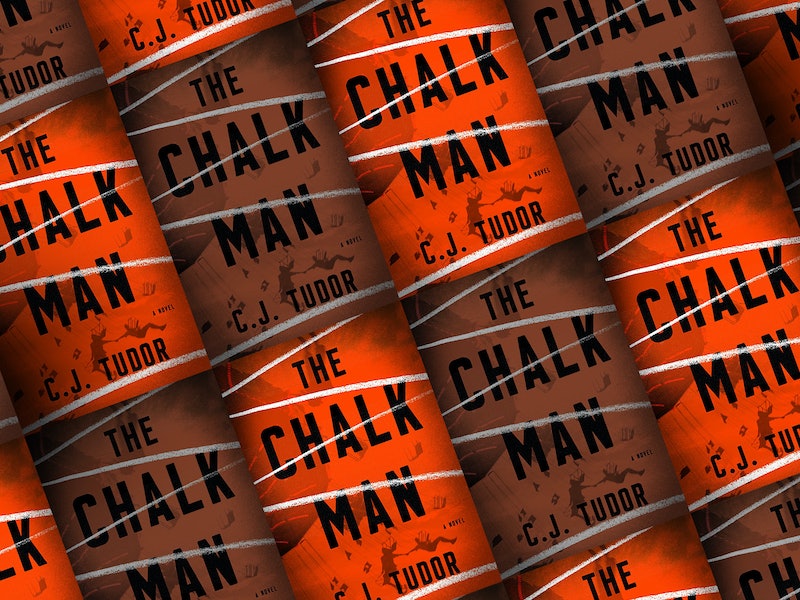 I’m a lifelong fan of the dark and macabre — I read Christopher Pike and RL Stine as a youngster, and watched slasher films and read deeply disturbing true crime and thrillers as an adult. I’m thick-skinned and not easily spooked, and I'll cheerfully flick off the lights and drift off to sleep alone in my apartment immediately after experiencing pulse-pounding terror. So it’s truly remarkable that after finishing the final page of C.J. Tudor’s The Chalk Man, I woke up in the middle of the night, sweaty and twisted in my sheets, heart pounding, eyes still on the lookout for whatever scary thing was chasing me. With a brilliant little knife twist in the book’s final pages, Tudor did the impossible: She freaked me the hell out.

The narrator of Tudor’s debut is Eddie, a funny and grouchy and satisfyingly unlikable teacher with a bad attitude and a fully stocked (and frequently used) liquor cabinet. He’s long since moved on from the event that marked the breakup of his childhood friend group — and, in many ways, the end of his childhood. In 1986, when 12-year-old Eddie and his buddies were kicking around their sleepy English town, drawing chalk men on one another’s driveways in their own secret language, a mysterious chalk drawing led them to a dismembered body hidden in the woods.

With a brilliant little knife twist in the book’s final pages, Tudor did the impossible: She freaked me the hell out.

Thirty years later, Eddie receives a mysterious letter in the mail: a single chalk stick figure. At first, he thinks it’s just a dark prank, especially when he learns his childhood friends — now scattered apart and long out of touch — got the same message. Well, it’s all fun and games until one of those former buddies turns up dead. Eddie’s left with no choice but to untangle what really happened all those decades ago — and face the demons of his past.

The Chalk Man alternates between 1986, as horror first gripped the village, and 2016, when the tragedy rears its ugly head again. What I love about this thriller is that it’s not trying to win the Pulitzer for flowery prose or tear-jerking poignancy. The writing is vivid and fun and the characters are richly drawn and occasionally, yes, moving. But The Chalk Man is first and foremost a chilling page-turner that succeeds at its goal: entertaining you from start to finish.

There’s the narrator’s bouncy, boisterous wit, for one thing. While dealing with an infuriatingly slow receptionist named Duds (“which seems less of a name and more an admission of a chronic fault,” Tudor writes), Eddie explains what he needs, then observes, “I wait for the significance of this to dawn. Moss grows around my feet. Glaciers form and melt.” It’s hard to grow bored when you’re inside the mind of a sarcastic jerk whose deadpan impatience rivals that of Miranda Priestly.

The Chalk Man is first and foremost a chilling page-turner that succeeds at its goal: entertaining you from start to finish.

The plot even takes a turn for the ludicrous when a shrieking townie with ill will toward the dead crashes a funeral — you guessed it, there’s a scuffle that leads to the coffin tumbling, inevitably, onto the church’s stone floor. It’s goofy and over-the-top and if a subpar author tried to pull it off, I’d roll my eyes. But in The Chalk Man, it somehow works. You can almost sense the impish glee with which Tudor crafted each page.

And the twists! This whodunit is packed with them, big buzzy surprises that make your jaw drop and the hair on your arms stand at attention. Lining up the dominoes in order to deploy shockers in just the right order at just the right moments is not easy—especially with a narrative that’s told in dual timelines, 30 years apart. But somehow, Tudor (whose juicy sophomore novel, The Hiding Place, came out Feb. 5) makes it look easy. There’s the classic fun of no-way-are-those-things-connected revelations as the plot zigs and zags and loops back over itself. And then there’s that final-page bombshell. Right as you’ve been lulled into a sense of complacency, when you’ve just forgotten there’s one little thread still hanging loose.

Again, consider yourself warned that The Chalk Man may lead to a sleepless night or two. But trust me: It’s worth it.