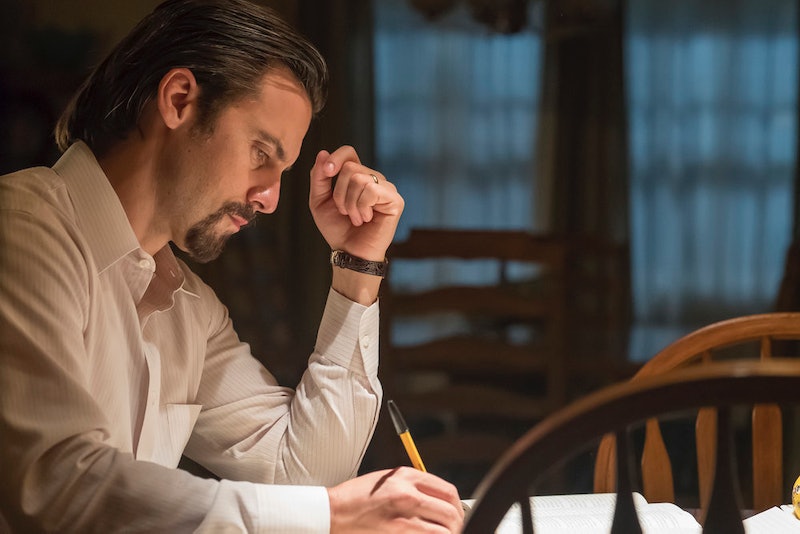 There are few dramas on television right now that have audiences desperately weaving together tiny clues and hints into a myriad of theories about what's to come, and This Is Us does it best. In its season premiere, the show revealed an image of the warm and loving Pearson home as a burnt shell of its former self, finally giving viewers a glimpse of what may have killed Jack. Theories exist about whether or not Jack actually dies this night — his unburned belongings in the front seat of Rebecca's car hint that this may not be the case — but a large portion of the fanbase seems to think Jack definitely died in the fire on This Is Us.

One of the clues is the dog Kate is cuddling as she cries in Miguel's living room, presumably after the fire takes place. We've known for a while that Kate somehow blames herself for Jack's death, and if Jack died after running back inside their burning home to retrieve Kate's dog, that would give us a little insight as to why she feels that way. It would also be in character — despite the demons Jack is facing with alcoholism and what could prove to be PTSD from his time in the war, he's always been a fantastic father, and running toward a dangerous situation to save his little girl's dog is definitely a classic Jack move.

Another clue is the fact that Kate has told Toby that her father died because he was "sick," which likely was her way of alluding to the alcoholism the audience is now aware of. If this is true, Jack could have been drunk and somehow accidentally started the fire. Kate could feel responsible for his death because he'd confided in her about the alcoholism before he told the other children, and she might feel as though she hadn't done enough to help him through it. (Even though that totally wouldn't be her fault at all.)

Some fans have speculated that the show has been hinting at an electrical fire since the very first shot. As Reddit user KatieCooksandCrafts pointed out, one of the first seconds of the first episode of This Is Us shows an electrical outlet. Plus, it's the same shot that Milo Ventimiglia's (who plays Jack) name appears on screen. Perhaps it's hinting that he died in this electrical fire. That could be kind of a stretch, but maybe not, as it seems like nothing happens on this show by accident.

Some viewers on Reddit also continue to think the house's washing machine that was featured in the first season has something to do with the fire. Many think that what sounded like helicopter blades moving when Jack was first shown hopping off a helicopter in Vietnam in the last episode also resembled the sound of a poorly functioning or unbalanced washing machine that may spark a fire. Or, as EEJR theorized, perhaps the washing machine triggers Jack's PTSD and it sets him off into setting a fire. For showrunners to have been planting clues so far in advance is a lot, but creator Dan Fogelman has said that the plan has been in place for a very long time, so it's not out of the question.

Another hint that some believe might hold weight in Jack's death is something Kevin said last season. "I'm thinking about what my dad would do," he said, before rushing away to be there for Randall in a difficult time. Could this mean Kevin was thinking about a time Jack rushed to the kids' aid? Kevin was running toward Randall, despite what it would cost him for that moment in his career. Some speculate that Kevin might've been echoing Jack running into the fire to save the children, no matter the cost.

When Jack's death is finally revealed to us, it'll no doubt be heartbreaking. Whether he actually died in the burning house itself or he died later — Kate, Randall and Kevin still are affected deeply by their father's passing. They hold him in such high regard, even years after his death, that we can only hope he went down swinging.