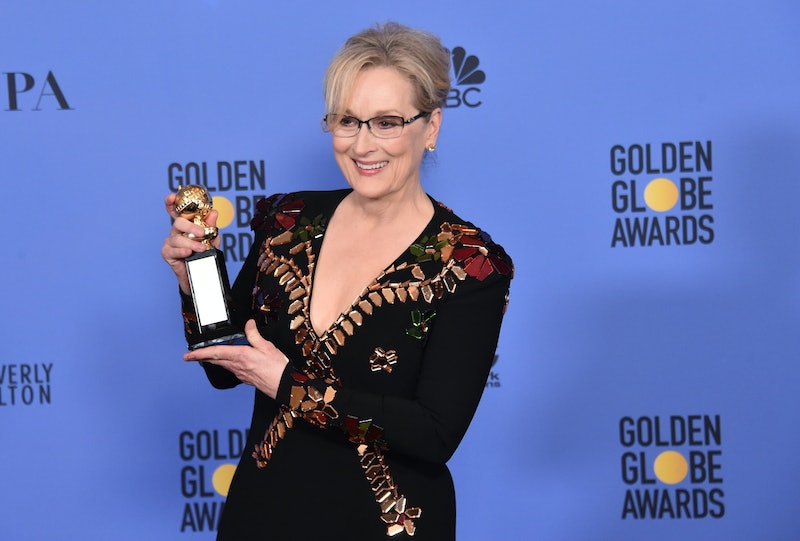 The 74th Annual Golden Globes ceremony on Sunday offered viewers a much-needed reprieve from the onslaught of panic-inducing Cabinet appointments being announced by the incoming administration. But that doesn't mean the show was apolitical: While Donald Trump's shocking electoral victory was the subject of more than a few jokes by presenters and award-recipients alike, it was Meryl Streep's Trump-themed speech accepting the Cecil B. deMille Award that most powerfully took aim at The Donald — without ever mentioning his name.

More importantly, though, Streep's poignant address laid out a roadmap for how Hollywood can serve as a pillar of the resistance against Trump and the Republican Party's regressive political agenda. Streep spoke in plain, honest language that gave everyone listening precise instructions on how to support that resistance. She called on her fellow actors, producers, and movie-goers to support the Committee to Protect Journalists (CPJ), explaining that "we're going to need them going forward. And they'll need us to safeguard the truth."

Before the clock struck midnight on Jan. 8, CPJ had received more than 700 donations online, according to Money. That's more than 140 times the number of donations that usually roll in on a Sunday night. Nicely done, Meryl.

As Streep explained in her speech, the crowd at the Golden Globes was full of precisely the kind of people the President-elect spent more than a year demonizing on the campaign trail. She spoke movingly about the unforgettable moment in 2015 when Trump mocked a disabled reporter, who, as Streep powerfully noted, he "outranked in privilege and power and the capacity to fight back." It was one of many chilling incidents where Trump blatantly targeted members of the press, goading the supporters at his rallies to harass and belittle reporters cordoned off in the media pen.

On the campaign trail, Trump made it clear he has little respect for the First Amendment, or the constitutional safeguards that freedom of the press is intended to assure in our American democracy. Now that Trump is days away from taking up residence in the Oval Office, journalists (myself included) are bracing for what will likely be an unprecedented lack of access to and transparency from a sitting President of the United States.

Streep's call to support journalists is not only timely, but also vital to the success of the anti-Trump resistance. Whether you support CPJ — which has an impressive track record of documenting and defending press freedoms around the world — or any other organization backing real journalists doing real reporting, Streep's message should resonate around the country.

If we're going to make it through four years of Trump, we need journalists doing what they've always done: uncovering corruption, holding the powerful accountable, and being a thorn in the side of those who want to distract citizens from important issues with, say, trivial tweets. And we, as journalists, need support from you, our readers. If you're able, subscribe to your favorite newspaper, magazine, or investigative news site. Help us show our bosses that people are willing to pay for quality journalism that advances the public good. Help us keep Trump's feet to the fire, and we'll keep digging through the muck to find the stories you need to know about.