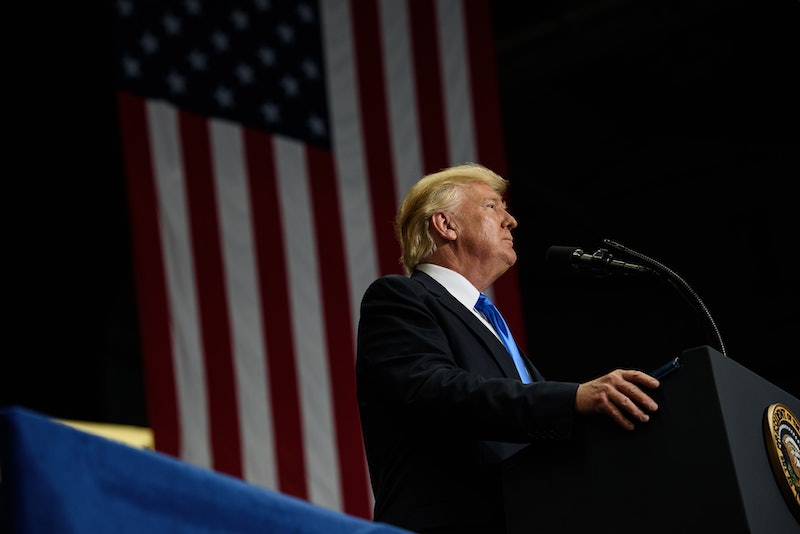 On Wednesday, President Donald Trump announced in a series of tweets — what else? — that he will not allow transgender people to serve in the military "in any capacity." His declaration represents a marked policy change from the previous administration, which lifted the military's longtime ban on openly transgender service members last June. It's a blow to the thousands of transgender personnel currently serving, but the consequences of Trump's announcement reach far beyond the military-industrial complex — and they're indicative of the turn LGBTQ rights has taken since the election.

Although Trump's announcement banning transgender service members was sudden, it doesn't come as much of a shock. During his presidential campaign, Trump claimed to support LGBT Americans. In October, he unfurled an audience member's rainbow flag reading "LGBT for Trump" on stage at a rally in Colorado, and he has called himself a "real friend" to the community. But while his hateful rhetoric on the campaign trail was largely reserved for people of color and women, his actions as president have belied any protestations of support for LGBT people (or anyone who isn't a straight, white man). Simply put, his bigoted political platform is built on deepening divides between Americans.

It's no surprise, then, that hate crimes rose following the election, reversing the steady decline of the past few years. Many of these targeted immigrants and people of color, but anti-LGBT sentiment has grown as well. A leading hate crimes researcher told Reuters this spring that bias crimes rose more than 20 percent in 2016, and most of the growth stemmed on the attacks on Muslim and LGBT people. In April, the Los Angeles Times reported a "markeed rise in violence against LGBT people" in Los Angeles last year. Violence toward minorities has escalated following the election, and to understand why, you just have to scroll through the news. What hate group wouldn't feel emboldened by the leadership of a president who has been steadily rolling back LGBTQ rights?

Whether or not it's occupied by a buffoon, the office of the president wields a strong influence. Trump's rhetoric matters, which is one of the reasons why the consequences of his transgender ban will be so widespread. In his tweets, he explained the reason for his decision: Transgender people, apparently, are a burden on the United States military.

"Our military must be focused on decisive and overwhelming victory and cannot be burdened with the tremendous medical costs and disruption that transgender in the military would entail," he wrote. He appears to believe that accommodating transgender military personnel is simply too much work.

Like many factoids offered by Trump, this isn't strictly true. In a statement released soon after the announcement, the American Civil Liberties Union clarified that according to research, transgender soldiers require no special benefits. "This has been studied extensively, and the consensus is clear: There are no cost or military readiness drawbacks associated with allowing trans people to fight for their country," said Joshua Block, senior staff attorney with the American Civil Liberties Union’s LGBT & HIV Project.

But when fact and bigoted claims are put up against each other, bigotry almost always wins. Trump's implication that transgender people are a troublesome weight only strengthens the perception that LGBT people are different, and that difference makes them second-class citizens. Given how much hate crimes have risen in the past year, this divisive rhetoric could pose a literal danger to LGBT people, particularly transgender individuals.

The real-world results of Trump's latest ban remain to be seen, but if the past year is any indication, his decision may encourage anti-LGBT sentiment across the nation — not just within in the military.

More like this
The 19 Best Tweets & Memes About Bisexual Awareness Week
By Lexi Inks
An Honest Review of MeUndies Boxers, According To A Non-Binary Person
By Megan Lasher
Pro Footballer Zander Murray Is "Blown Away" By Support After Coming Out
By Sam Ramsden
'Heartstopper' S2 Just Welcomed Four Brand New Cast Members
By Nola Ojomu and Sam Ramsden
Get Even More From Bustle — Sign Up For The Newsletter