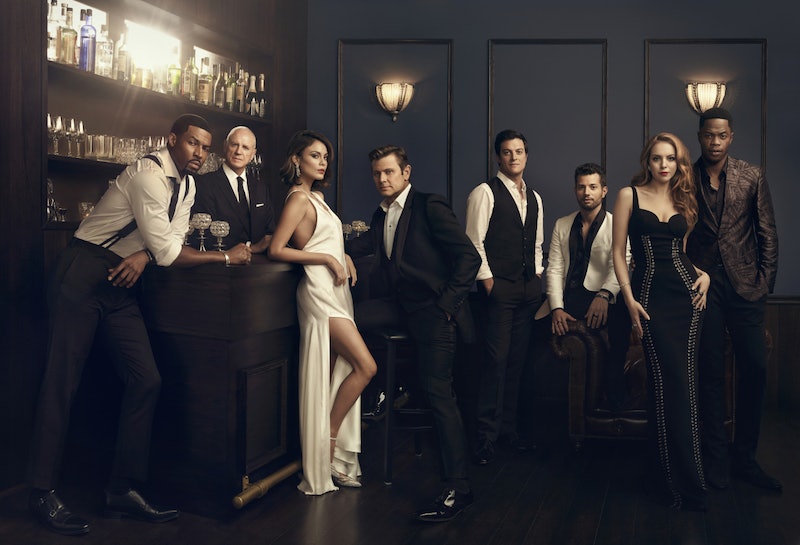 Flaunting an obscene amount of wealth on a television show is nothing new — audiences certainly love a fantastical escape. But a new television series debuting in 2017 about a Southern oil tycoon family, aka the one percent of the one percent, sounds more than a little problematic given what's going on in the country right now. Thankfully Dynasty, The CW's reboot of the 1981 classic soap opera, is more than aware of that. Armed with the knowledge of how divided the country is at the moment, the fraught political climate, environmental issues, and public opinion of this particular kind of a powerful, wealthy family, the younger remake aims to tackle as many current sociopolitical issues as possible within the narrative.

Just as with the original '80s series, the rebooted Dynasty (premiering Wednesday, Oct. 11 at 9 p.m. on The CW) follows ruthless oil magnate Blake Carrington (Grant Show) as he impulsively marries his employee Cristal Flores (Nathalie Kelley), much to the shock and horror of his ambitious daughter Fallon (Elizabeth Gillies) — who thought she was going to inherit the COO position of her father's company instead of his new bride — and environmental crusading son Steven (James Mackay) — whose status as an out and proud gay man brings no shortage of tension between him and his father.

Amidst all the family drama and manipulation, in the premiere alone Dynasty also manages to fit in storylines dealing with women's equality and rights, LGBTQ relationships, race, immigration, poverty, environmental issues and politics. This is definitely not the same show from 30 years ago.

"My biggest hope and desire for the show is, we're not trying to tell people what to think or how to think, there's no political agenda or anything like that," Kelley tells Bustle about Dynasty getting political. "What I really hope we are is a mirror reflecting back to society what people are already seeing in their lives."

Dressed in head-to-toe pink Stella McCartney on set in Atlanta in between scenes, Kelley makes sure to pay her respect to the original, iconic series while explaining that it only reflected a "certain section of society."

"A lot of people tuned in and didn't see themselves on the original show," she says. "For so long, so many communities have not been represented on television and this is a show where everyone can tune in and find themselves somewhere. I think that's really important to make a show that's technically about the one percent actually about everybody and weave in general human stories. We are at a time where as a society we do need to look at ourselves and ask ourselves how we got here."

Gillies understands the country's long fascination with powerful family dynasties like the fictional Carringtons, even if most people don't agree with their actions or morals or lifestyles. She argues that that's what makes Dynasty so compelling, as it offers a glimpse into the lives most people would never have access to.

"There's a ton of real-life issues going on in our show," she promises. "With everything going on in this political climate, [my character has] been compared to Ivanka [Trump], which I'm like ugh, but I understand."

Rafael de la Fuente — who is playing the gender-swapped Sammy Joe Flores, Cristal's nephew and Steven's love interest — loves how Dynasty is using the nation's "whole obsession and fascination with dynasties nowadays like the Trumps" to slyly tell responsible and relevant stories.

"With the name [Dynasty], we're bringing in an audience to then bring subject matters to the table that we need to talk about and discuss like immigration and geopolitics," he says. "We talk about Venezuela which is my home country and what's going on there. And social issues and interracial dating and gay dating, all these very current subject matters. It's bold and I like it."

He's especially proud of The CW for showing Sammy Joe and Steven's relationship in an authentic and responsible way, noting that gay representation still has a long way to go before it's where it needs to be. "The network is being very brave and making it normal, which it is but sometimes you can feel like it's not on TV," he says. "It's time to shed that shit and be human and connect."

There's no arguing that the original series was homophobic, and the way it treated Steven's homosexuality was "extremely problematic," according to Mackay. "It's only 30 years ago, but the way the other characters engaged with him around that, the friction between Steven and Blake around that issue, is just absurd when you look at it through a contemporary lens," Mackay says. "Steven in our version, his sexuality isn't the only thing that defines him."

But while Blake Carrington has been updated a little, there will still be that father/son conflict from the original, just toned down and made a little more appropriate.

"He's a little bit out of time," Show says of the new version of Blake, calling him a "deeply flawed" character. "In the original, race and sexuality played a big role in Blake's discomfort with the world around him and that's still there. My Blake does have a problem with his son being gay. It's because he's not going to be the son I want him to be, i.e. to take over this dynasty and run it the way I want it to be run. There are race problems too. His main rival, [Jeff] Colby [played by Sam Adegoke], is black. That's going to be a problem [for him]."

Adegoke, whose Colby was white on the original series but now is a young black man with new money, credits Dynasty's desire to get political in "subtle ways" as one of the main reasons why he was attracted to the reboot.

"I don't know how you can't get political," he says. "It would be a miss on our part if we don't, if we pretend the elephant isn't in the room."

And the relocation of the series from Denver (where the original show took place) to Atlanta allows Dynasty to explore even more sociopolitical issues than before.

"There's some old money here and there's this cross pollination of you see the gentrification happening, you see large estates going up next to neighborhoods that were impoverished," Adegoke adds. "That all has to inform what we're doing."

Gillies adds, "And then with oil, we're exploring frakking and renewable energy, so we're doing it as well as we can."

Robert Christopher Riley, who plays Michael Culhane, the Carringtons' driver and Fallon's secret fling, believes that if they were making Dynasty even one year ago, "it would be a completely different show."

"Hell yeah. All of a sudden things have come to light," he says of the past year. "What's happening in America right now, a lot of people have been able to pretend that America has made a lot more progress than it has and it's becoming more and more evident that that's not the case at all. That's something we can tackle on this show."

With morally responsible storytelling paired with enviable fashion and mouthwateringly beautiful locations, Dynasty is shaping up to be this season's hottest new series.