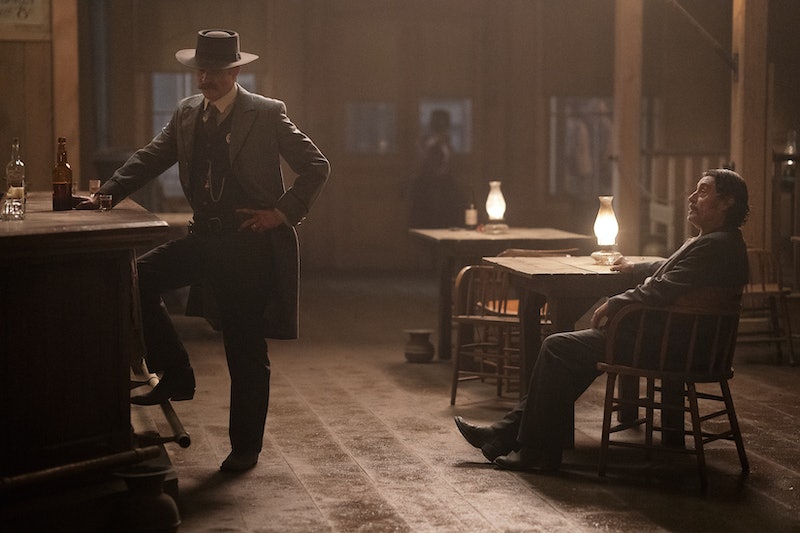 Reviving canceled shows may be all the rage these days, but it's rare that one returns a whopping 13 years later. After being abruptly canceled in 2006 after three seasons, HBO's acclaimed Western, Deadwood, finally returns on Friday, May 31, for its highly anticipated wrap-up movie. But this long after the fact, did the Deadwood movie cast manage to reunite all of the show's main actors? It's impossible to imagine the streets of Deadwood, South Dakota, populated by anyone other than the original ensemble. But it's been over a decade since the Season 3 finale, and wrangling that sprawling cast back together again — many of whom have gone on to illustrious careers and are probably very busy — likely proved one of the main challenges in shepherding this project to the screen, and why it took so long to come to fruition.

Fortunately, HBO and Deadwood creator David Milch waited until they could lasso as many of the original cast members as possible before shooting Deadwood: The Movie. More than a dozen of the show's starring cast members will be returning to their roles, with a couple notable omissions. Powers Boothe (24, Agents Of S.H.I.E.L.D.), who played Bella Union owner Cy Tolliver, passed away from cancer in 2017. (Fittingly, he was put to rest in a cemetery in Deadwood — although it's Deadwood, Texas, not Deadwood, South Dakota.) And Titus Welliver (Lost, Agents Of S.H.I.E.L.D.), who played Al Swearengen's henchman Silas Adams, could not return for the movie due to production on his Amazon series, Bosch.

But barring those two exceptions, who will undoubtedly be missed, pretty much every denizen of Deadwood is back for the movie. If you haven't watched the series since its original run back in the early aughts, you might even be surprised by how many now-famous faces are in the cast. Here's who's returning — and what they've been up to since the series went off the air in 2006.

McShane, who earned an Emmy nomination for his portrayal of the swaggering, swearing Al Swearengen, is back as the infamous owner of the Gem Saloon. You may have seen him on the big screen as Blackbear in the fourth Pirates Of The Caribbean movie, On Stranger Tides, in this year's Hellboy reboot, or in all three of the John Wick films.

After Deadwood was canceled, McShane went on to star in the acclaimed but short-lived NBC drama Kings alongside a young Sebastian Stan. He also guest-starred on American Horror Story: Asylum as a murderous Santa Claus, appeared on one episode of Game Of Thrones as the Hound's rescuer/mentor Brother Ray, and currently leads Starz's adaptation of American Gods as the Norse god Odin, aka Mr. Wednesday.

Olyphant went from playing Sheriff Seth Bullock to playing U.S. Marshall Raylan Givens when he traded in Deadwood for Justified. The acclaimed FX series ran for six seasons and earned Olyphant an Emmy nomination for Best Actor. On the small screen, he also starred alongside Glenn Close and Rose Byrne in Season 2 of FX's Damages, and co-starred with Drew Barrymore in all three seasons of Netflix's recently canceled Santa Clarita Diet.

On the big screen, he appeared as the villain in Live Free Or Die Hard, as the lead of the video game adaptation Hitman, and in the zombie movie The Crazies. He'll next show up in Quentin Tarantino's hotly anticipated new film Once Upon A Time In Hollywood.

You may recognize Parker from her Emmy-nominated role as the whip-smart House Majority Whip Jackie Sharp on Netflix's House Of Cards. After concluding her run on that show, she moved to another Netflix original series, the Lost In Space reboot, in which she stars as mission commander Maureen Robinson. Last year, she lead the award-winning independent film Madeline's Madeline. Now she's returning to Deadwood as wealthy widow Alma, who ended Season 3 by selling off her sizable gold claim to the villainous George Hearst.

You may now know Malcomson best as Katniss' mother Mrs. Everdeen in all four Hunger Games movies, but Deadwood fans will remember her as the compassionate and fiery Trixie, who worked her way up from sex worker to bank clerk. She also starred for five seasons as Ray's wife Abby on Showtime's Ray Donovan, and has had recurring roles on shows like Lost, Caprica, and Sons Of Anarchy.

After Dickens appeared on Deadwood as madam-turned-schoolteacher Joanie Stubbs, she went on to have roles in many of the most popular and acclaimed shows of the decade, including Lost (as Sawyer's fling/Kate's friend Cassidy), Friday Night Lights (as Matt Saracen's troubled mother Shelby), Treme (as New Orleans chef Janette), House Of Cards (as political correspondent Kate Baldwin), and Fear The Walking Dead (as determined mother Madison Clark). She also delivered a juicy supporting turn in Gone Girl as suspicious detective Rhonda Boney.

Gunn joined the Deadwood cast in Season 2 as Seth's estranged wife Martha, but she's now undeniably most famous for playing the wife of the star of another acclaimed TV drama: Walter White's beleaguered spouse Skyler on AMC's Breaking Bad. More recently, she starred in Gracepoint, the American remake of the British series Broadchurch, and appeared in the 2016 Tom Hanks movie Sully.

Weigert's deep roster of TV credits after appearing as the drunken but lovable Calamity Jane on Deadwood includes stints on Lost, United States Of Tara, Sons Of Anarchy, Grey's Anatomy, American Horror Story, Once Upon A Time, and most recently Jessica Jones (as Jeri Hogarth's wife Wendy) and Big Little Lies (as Celeste's therapist Dr. Reisman).

While most of Deadwood's cast members have gone on to illustrious careers, Hawkes is the only one who can now boast an Oscar nomination to his name, having earned a Supporting Actor nod for his role in the 2010 Jennifer Lawrence drama Winter's Bone. Hawkes has also had some recurring roles on shows like Eastbound & Down and Lost, but the bulk of his work has been on the big screen in acclaimed films like Martha Marcy May Marlene, Contagion, The Sessions, Lincoln, and Three Billboards Outside Ebbing, Missouri.

Dourif had a distinguished career long before joining Deadwood as the non-judgmental doctor Amos Cochran, mostly in genre fare like Lord Of The Rings (as Saruman's slimy henchman Wormtongue) and the Child's Play series (as the voice of Chucky). Since Deadwood, he has continued voicing that murderous doll — although that job is being taken over by Star Wars star Mark Hamill for the upcoming 2019 reboot. Dourif has also appeared in episodes of shows like Fringe, Once Upon A Time, and Agents Of S.H.I.E.L.D.

After wrapping his run as Deadwood's mayor, E.B. Farnum, Sanderson stayed in the HBO family to portray Bon Temps' sheriff, Bud Dearborne, on the first three seasons of the network's hit fantasy series True Blood. He has also appeared in episodes of shows like Lost, Bones, and American Gods (alongside his Deadwood co-star McShane).

McRaney, who plays the villainous George Hearst on Deadwood, has hundreds of credits to his name spanning back to the 1970s. But modern viewers will most recognize the character actor as Frank Underwood's nemesis Raymond Tusk on Netflix's House Of Cards and the kindly Dr. Katowski on NBC's This Is Us, a role which earned McRaney an Emmy Award for Best Guest Actor in a Drama Series.

Brown and Bridgers were inseparable on Deadwood, playing Swearengen's most loyal cronies. In the years since, Brown has appeared in films like The Sessions, The Master, The Lone Ranger, Wild, and Black Mass, as well as on shows like Justified, American Horror Story, Bates Motel, Grey's Anatomy, True Detective, and Preacher. Meanwhile, Bridgers has had roles in movies such as Room, Trumbo, Midnight Special, and The Magnificent Seven, and on TV series including Private Practice, Justified, True Blood, Raising Hope, and Rectify.

You may have seen Young — who portrays Mr. Wu, the leader of Deadwood's Chinatown — on shows like Sons Of Anarchy or The Man In The High Castle, or in films like Crank or Men In Black 3.

Although Alma's adopted daughter Sofia isn't a new character to Deadwood, she is portrayed by a new actress: the older version of the young girl is now played by Lily Keene instead of original cast member Bree Seanna Wall. Keene is a relative newcomer, but has recently appeared in episodes of Young Sheldon, Legion, and This Is Us.

See the gang back in action when the Deadwood movie airs Friday, May 31 at 8 p.m. ET on HBO.