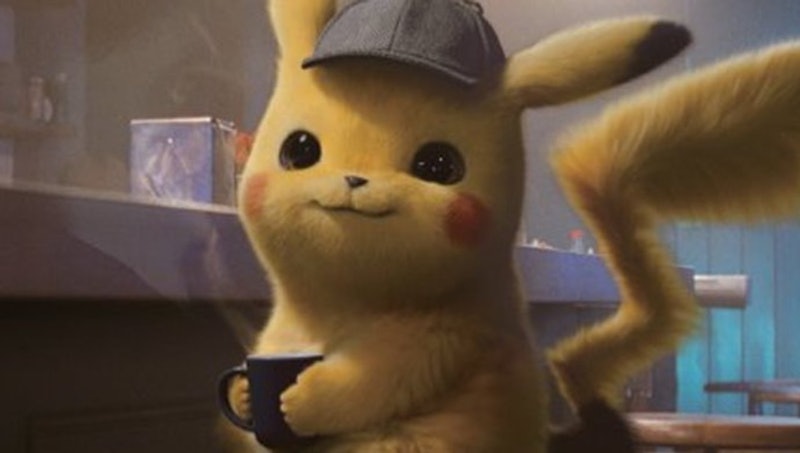 Mild spoilers ahead. It's understandable that fans would expect another surprise reveal after the second trailer for the film stunned Pokémon lovers, showing ultra-powerful former enemy Mewtwo bursting through a Pikachu parade balloon at the end. Alas, this time around all surprises take place during the regular runtime; there is no post-credits scene in Detective Pikachu. So even fans who are hyped once again to catch 'em all and want to leave no leaf unturned can confidently head out once the film is over.

With audiences accustomed to mid- and post-credit jokes, references, and reveals from years of MCU movies, this might have some viewers worried that absence of a post-credit scene means no plans for a sequel, since a post-credit moment suggests a continuation of the story beyond the film's contained parameters. Fear not — the one thing that's certain about the future of everyone's favorite electric mouse is that a Detective Pikachu sequel is already in the works. According to The Hollywood Reporter, Oren Uziel, the screenwriter of 22 Jump Street is already attached, though whether Ryan Reynolds will return to voice the fuzzy detective remains unconfirmed.

Still, it's strange there isn't a post-credits sequence, if only because production company Legend and Warner Bros. look like they're betting big on the larger Pokémon franchise. In addition to the already-begun sequel, We Got This Covered claims that a spinoff is also in the works, focusing on genetically-manipulated aggro Pokémon Mewtwo. But look, we all love a brooding anti-hero, but why focus on him when there are plenty of fan favorites that could easily carry their own film? Psyduck, Snorlax, Jigglypuff... heck, if you want brooding, Cubone's wearing his own mom's skull as he travels on seeking revenge and crying at the moon.

That's part of the easy appeal of additional Pokémon movies. Now that Detective Pikachu's set up the option to reframe these beloved characters — a large chunk of the film's hype came just from hearing Pikachu have Ryan Reynolds' voice, forget giving him agency as a private detective — the options are wildly open. Jigglypuff in a re-remake of A Star Is Born? Squirtle as an Indiana Jones-style adventurer? Anything's possible!

And Reynolds agrees. Talking to ComicBook.com, the actor said, "I’m surprised this hasn’t been developed earlier because [Pokémon] has such a universe, and I can see it going in different directions, even ones without Pikachu... If we're lucky enough to make a bunch of these things, you gotta take some deep dives; you gotta zig when everyone thinks you're gonna zag."

It could be that the real reason the film lacks a post-credit sequence is that there are too many opportunities — with so many potential characters and so many different possibilities, why hype fans in one direction when you can just surprise them down the road with the new idea? It's also an excellent sign a movie accomplished everything it wanted to within its runtime, meaning fans of Detective Pikachu can enjoy the movie in full without fearing they've missed out.