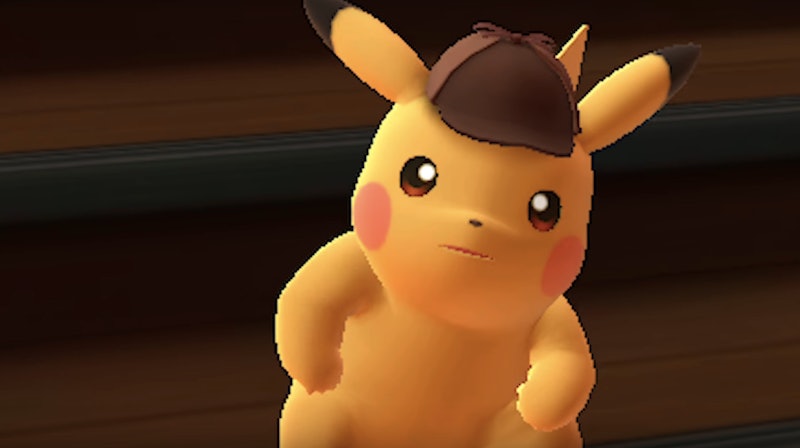 Pokémon Detective Pikachu is hitting theaters on May 10, but it won't be the first time this story is told. The movie is based on the Detective Pikachu video game for Nintendo 3DS, which was only released in the U.S. in March of last year. And while the story in the film stays pretty close to what goes down in the video game, the ending of the movie gets more specific.

Ahead of the game's release, Nintendo put out a trailer that explains the basics of the story: a Pikachu who is also a detective has lost his memory, a human named Tim's father is missing, Pikachu — being a detective — helps him solve the mystery. There is also a mystery about "rampaging Pokémon" and a sketchy looking scientist.

According to Nintendo's description, "As Tim Goodman, you'll partner with a self-proclaimed 'great detective' Pikachu to solve strange occurrences all over Ryme City. Together you must investigate, take notes, and meet up with other Pokémon to unravel the city's greatest mysteries!" Players "investigate crime scenes, gather testimonies, uncover information, and interact with Pokémon to solve cases."

This is very similar to the movie, which involves Tim (Justice Smith) looking for his dad, figuring out why he can understand the talking Pikachu (Ryan Reynolds) when no one else can, and looking into some experiments being done on Pokemon.

IGN reviewed the game when it came out and explained that multiple cases are solved as the game goes on, but that the overarching story about Tim's dad continues throughout. The review notes that some the cases are easy to solve, but the writer adds, "Cases grow a little more intricate with every chapter, and some even introduce short puzzles."

As for the ending of the game, it involves talking about spoilers for the movie, so stop reading now if you don't want to see them.

In Pokémon Detective Pikachu, there's a big twist that reveals that Tim's dad, Harry, has merged with Pikachu, which is why this Pikachu can talk in an adult man's voice. (Reynolds', specifically). In the game, this is hinted at, but is not as clear as it is in the film.

According to the description of the game's plot on the Pokemon Fandom site, at the end, "Mewtwo reveals to Tim that his father is still alive and that Tim will eventually find him as long as he continues his search. Tim carries Pikachu back to their apartment and the next day they embark on their search to find Harry."

However, actual players of the game have said on Reddit that, to them, the end implies that Harry is part of Pikachu. On a thread called "[Spoilers] Detective Pikachu Ending felt rushed", one Reddit user said, "That would explain all the Dad-esque mannerisms." Another added, "To me, the most obvious explanation is that Tim's Dad's mind was transferred/fused with Pikachu's after the accident, by Mewtwo." There was also a similar conversation on a GameSpot forum, in which one of the users wrote, "I can't be the only one that thinks Detective Pikachu is Tim's dad."

Some of the commenters also thought that confirmation of this theory was being saved either for a sequel game or for the movie. It's possible that this was the plan all along to keep things more vague in the game so they could be revealed concretely in the movie. The movie was announced long before the game was released in the U.S. and the same year (2016) as it was released in Japan, as reported by The Verge. Either way, now we all know the truth about Tim, his dad, and Detective Pikachu.