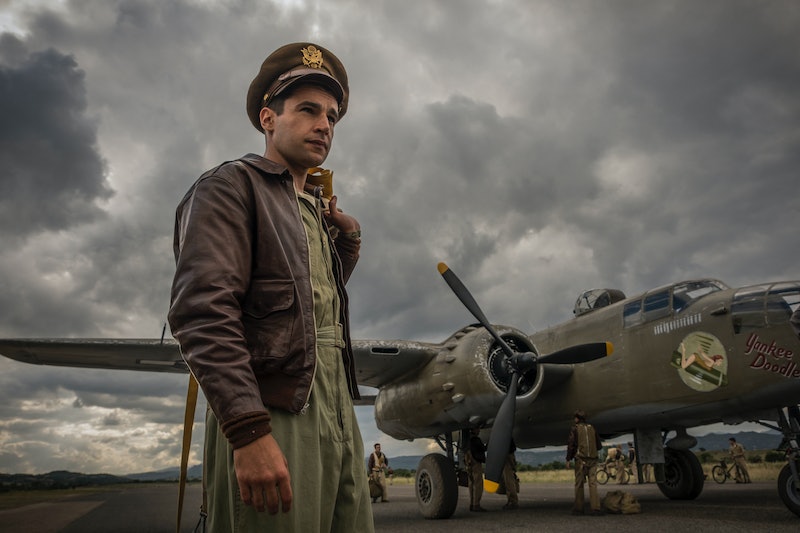 If you've read Joseph Heller's 1961 military satire Catch-22, it's likely been a few years. And now that the novel has been adapted for TV — out Friday, May 17 on Hulu — audiences may be scrambling to recall what exactly happened. Thankfully, there's not too many differences between the Catch-22 show and book, as the series is quite faithful to its source material.

As a quick refresher, the book follows an Air Force bombardier named Yossarian (played by Christopher Abbott in the Hulu series), who is stationed on a small Italian island during World War II. Although his only goal is to get out alive, Yossarian's colonels keep increasing the number of missions required to get sent home, just as he believes he's in the clear. As a result, the bombardier tries to prove he's not mentally stable enough to fly a plane, but only people who are trying to preserve their own lives are mentally stable. So by pretending to be insane, he is in fact sane — that's the catch.

According to Vanity Fair, Heller's influential novel was inspired by the author's own experiences as a bombardier during World War II. The book was originally titled Catch-18 — a random number the author had chosen. However, his Simon & Shuster editor, Robert Gottlieb, later told the author that they would have to nix the title, since they were publishing a book titled Mila 18 by Leon Uris. "And then I was lying in bed worrying about it one night, and I suddenly had this revelation," Gottlieb later recalled, per Vanity Fair. "And I called [Heller] the next morning and said, 'I've got the perfect number. 22, it's funnier than 18.... He said, 'Yes, it's great.'"

As for how different Hulu's Catch-22 is from the book, it looks to be incredibly true to its source material. The main difference, however, is while the book jumps back and forth from 1942 to 1944, Hulu's follows the story in chronological order, per IndieWire.

As a result, it took series co-writer Luke Davies eight months to sort out Catch-22's chronology, according to Reuters. "I wanted to let the chaotic energy and that kaleidoscopic sense of a mad jostle remain, but I cleaned up the chronology so that all of our characters could actually grow emotionally as the series progressed," Davies said.

Alongside Abbott (of Girls and The Sinner fame), Catch-22 stars co-director and executive producer George Clooney as Scheisskopf, Kyle Chandler as Colonel Cathcart, Saturday Night Live alum Jon Rudnitsky as McWatt, and Hugh Laurie as Major de Coverley, among others. "Heller was so on the mark in his gloriously acidic comedic portrayals of those in positions of power," Clooney told the L.A. Times. "The very people having the least skills to lead us become the ones in charge. But the story is really one man's journey of loss."

And considering recent political events, Catch-22 is sadly just as pertinent as ever. "The novel is filled with crazy older men who are delusionally invested in the sense of their own glory and importance, and who are comically clueless," Davies told Reuters. "We have one of those guys in the White House right now, so it feels way more relevant even than it was a couple of years ago."

And while Heller — who died in 1999 — would likely be upset that his book is still so relevant, history is unfortunately cyclical. And although his novel jumps back and forth in history — giving readers an "unstuck in time" quality, to reference his literary contemporary, Kurt Vonnegut — the Catch-22 series will let audiences watch it in a less dizzying order.

More like this
This Episode 6 Moment Foreshadows Viserys' Fate On 'House Of The Dragon'
By Grace Wehniainen
Nicola Coughlan Shared A Lady Whistledown Excerpt From ‘Bridgerton’ Season 3
By Grace Wehniainen, Alyssa Lapid and Sam Ramsden
The BBC Is Adapting A Best-Selling Novel About A Mistaken Killer
By Darshita Goyal
Watch The Thrilling Teaser Trailer Of 'Shadow And Bone' Season 2
By Gretchen Smail and Jack Irvin
Get Even More From Bustle — Sign Up For The Newsletter