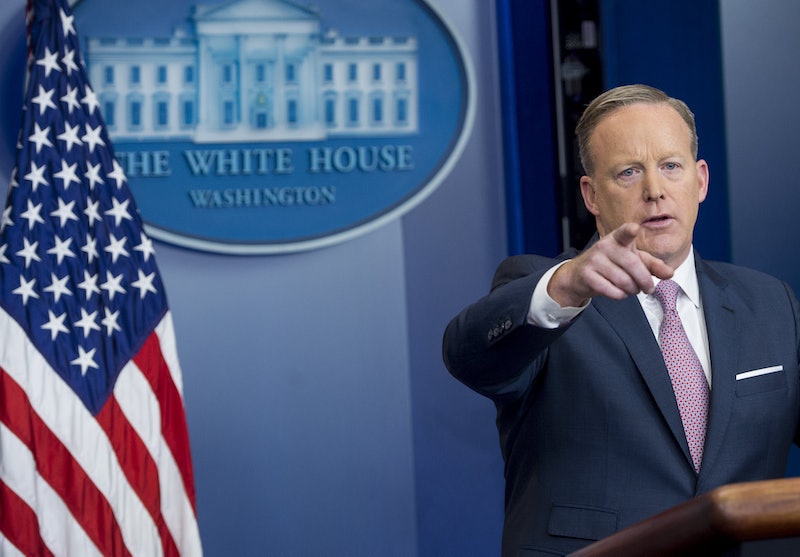 As soon as the 2016 election was called in President Donald Trump's favor, Americans knew that things were going to be different going forward. Whether that is for the better or worse depends on who you ask, but we can all agree that a political candidate as radical as Trump is going to change things. And one of the first things to change may well be the way his administration interacts with the press. This was especially evident during White House Press Secretary Sean Spencer's first press briefing when he gave the first question to a New York Post reporter.

Not only did the first question go to the Post, but the reporter was Daniel Halper, who wrote Clinton, Inc.: The Audacious Rebuilding of a Political Machine, which as you may have guessed from the title is not exactly very pro-Clinton. According to TIME, the second question was given to Jenna Wishon of Christian news network CBN News; the third went to Janet Rodriquez of Univision.

Former President Barack Obama's administration had a habit of giving the first question in a press briefing to the Associated Press. Maybe this doesn't seem like much if you happen to be unfamiliar with press briefings (as are most people), but it does suggest a lot about how Trump and his administration view journalists.

Trump has talked extensively about the "dishonest" media, with whom he has a "running war." So, it's not terribly surprising that his administration would buck tradition and choose different media outlets to ask questions during the briefings, or at least at first. Traditionally, the five major broadcast news networks, Reuters, and the Associated Press get the best seats in the house during briefings (aka the front row).

Giving the front row to the networks with the most viewers makes perfect sense, as well as two print and digital outlets known for their fair, objective reporting. But Trump doesn't seem to view the press as fair, and by calling on the Post and a Christian news network at his very first briefing, Spicer made a point to the media that he is not interested in adhering to any type of expectations about the procedure of press briefings. Tellingly, when he was asked if he plans to be truthful in his briefings and not knowingly say something that is false, his response was less than reassuring:

Our intention is never to lie to you. You're in the same boat: I mean, there are times when you guys tweet something out or write a story and you publish a correction. That doesn't mean that you were intentionally trying to deceive readers and the American people, does it? And I think that we should be afforded the same opportunity.

There are times when we believe something to be true or we get something from an agency or we act in haste because the information available wasn't complete but our desire to communicate with the American people and make sure that you have the most complete story at the time, and so we do it. But, again, I think that when you look net-net, we're going to do our best every time we can. I'm going to come out here and tell you the facts as I know them, and if we make a mistake, I'll do our best to correct it.

Considering he addressed the question by telling the press they make mistakes, too, this is not a great sign. The press's job is actually to provide a check on the government. The press secretary does not need to bring up the fact that the press makes mistakes, because the press also admits to their mistakes and provides apologies and corrections when necessary. Spicer needs to move past the things that do not matter and do his job to inform the press of the administration's actions so that they can correctly inform the American people.