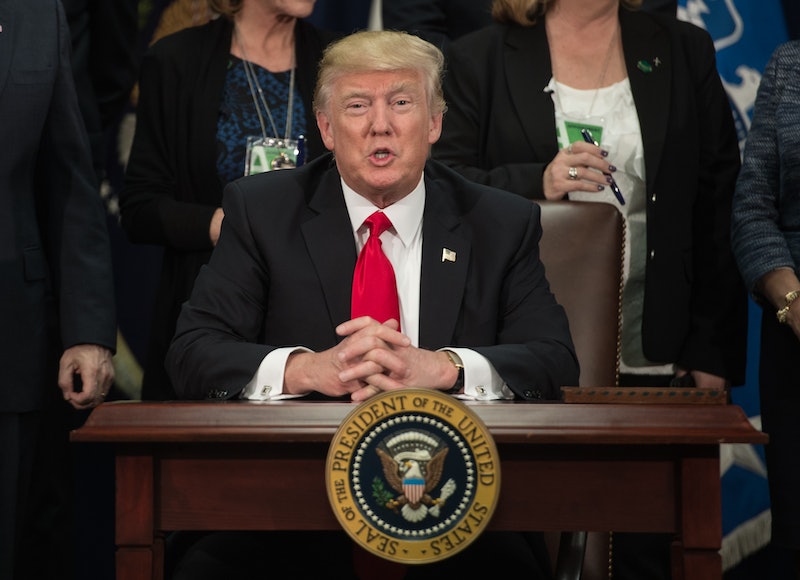 On day six of the Trump administration (though having taken the inauguration weekend off, some are insisting its only day three), President Trump made moves to enact a number of policies he promised during his campaign — ones that are horrifying progressives. Among the announcements on Wednesday was a buried tidbit amid the news of the construction of the border wall and the refugee ban, a disturbing detail you might have missed.

Namely, Trump wants to release reports on crimes supposedly committed by undocumented immigrants in so-called sanctuary cities, an inciting and demagogic plan if ever there was one. A tweet from Will Sommer of The Hill highlighted Section 9 (b) of the president's executive order, entitled "Enhancing Public Safety in the Interior of the United States":

To better inform the public regarding the public safety threats associated with sanctuary jurisdictions, the Secretary shall utilize the Declined Detainer Outcome Report or its equivalent and, on a weekly basis, make public a comprehensive list of criminal actions committed by aliens and any jurisdiction that ignored or otherwise failed to honor any detainers with respect to such aliens.

For some essential background, "sanctuary cities" are cities that do not prosecute undocumented immigrants for violating federal immigration laws, thus providing confidence that they can interact with law enforcement without fear of deportation.

Trump is staunchly opposed to sanctuary cities, which is not surprising. His campaign's tenor on immigration ranged from the hostile to the openly racist, and within the first five minutes of his presidential campaign announcement, he declared that Mexico was sending its "criminals" and "rapists" to the United States.

As many have noted, this kind of scheme isn't out of character for the people Trump's surrounded himself with. His chief strategist, Steve Bannon, for instance, used to run a website that has a specific news tag for "Black Crime."

Suffice to say, releasing a report on crimes allegedly committed by undocumented immigrants is right up his alley, thoroughly terrifying for its scapegoating and the increased stigma those immigrants will face. Not that racist stereotypes about violent crime would be appropriate otherwise, but it also bears noting that it's a well-documented matter of record that immigrants commit fewer crimes than native-born Americans.

But it's not just undocumented immigrants who will suffer for this. This kind of stigma has a lot more to do with skin color than the finer points of who you are, where you come from, how you worship, or what your immigration status is.

Simply put, like so many of the policies Trump is rushing to push through, this will make America a tangibly worse, more dangerous place to live for people of color. Basically, you know all those bleak and dire things that countless progressives warned for months would happen if Trump won? The ones who were chastised about taking him literally? Well, all that stuff now seems to be happening, and at breakneck speed.