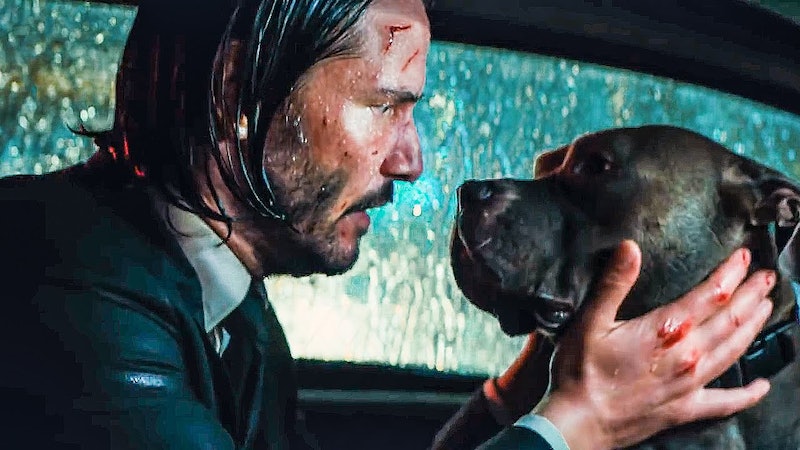 In a trailer for John Wick: Chapter 3 - Parabellum, out May 17, the Manager (Anjelica Huston) says to Wick (Keanu Reeves), "All this over a puppy?" As Wick correctly rebuts, it wasn't just a puppy. The sparking incident of the very first John Wick film, which came out in 2014, was the cruel murder of Wick's new puppy Daisy, gifted to him by his late wife. Since then, Wick's been on a full-blown rampage, with decisions and actions leading to bigger and more brutal issues. Now, with the entire world against and after him, there's only one thing Wick can count on: man's best friend. That's right, the dogs in John Wick: Chapter 3 are fighting back.

Admittedly they're not quite Wick's dogs. Probably to calm fans' anxieties that the sweet pit bull pup he adopted at the end of the first film, who loyally trotted by his side when all others abandoned him at the end of the second, wouldn't meet the fate of Daisy, the studio specifically released the following clip, titled "You're A Good Dog." In it, we see Wick and his dog climb into a taxi en route to a meeting. Realizing he'll be delayed, and also that not standing next to the world's largest shooting target would be good for his dog's health, Wick sends his pet off to the Continental for safety.

But later on, seeking help from old associate Sofia (Halle Berry), John finds himself back in the doghouse, literally and in the fun way. While Sofia's not keen to help John out, she's obliged as he has her Marker, the same mark of ironclad promise that got John in such a mess in 2017's John Wick: Chapter 2. More importantly, that means she and her phalanx of dogs are at John's disposal. And what you're seeing isn't movie magic, it's actually 100% pure dog-Berry action.

Speaking to Collider, Parabellum director Chad Stahelski explained that after a careful interview process to choose the best and brightest pups, Berry herself actually trained with the dogs — specifically, five Belgian Malinois dogs. The Belgian Malinois as a breed is described by the American Kennel Club (AKC) as confident, smart, and hardworking creatures who forge an unbreakable bond with their owner. They're often used as bomb-sniffing dogs or members of K-9 police patrol units. "To deny a Mal activity and the pleasure of your company is to deprive him of his very reasons for being", writes the AKC, noting that underutilizing the breed's love of challenge, training, and exercise is often the biggest issue raising them.

This was not a problem for the pups of Wick. In the same interview Stahelski says the film's long, unbroken shots where the dogs enter the ongoing fight and obey Berry's attack commands are all real, and shown in real-time. "When we cast Halle we had the big talk. Halle actually came, after all her fight rehearsals and gun rehearsals, she would go sit, and work, and play with the dogs for months on end so the dogs on-screen actually obey Halle. They’re not looking at a trainer.” The close human-pup relationship is also part of the plot — where Wick's first dog represented his wife, Stahelski said that "the dogs in Parabellum are symbolic of someone that Halle has lost."

On The Tonight Show With Jimmy Fallon, Berry described the Malinois she worked with as the "smartest, most ferocious, but also cuddly and very loyal." She told Fallon, "I had to work with them for six months, two or three hours a day, and it was the best time of my life."

As for the extent of Reeves's own dog training, during an MTV interview for John Wick: Chapter 2, he summed it up as "hangin' out." But when the interviewer said she'd heard working with dogs wasn't fun, Reeves rebutted, "I think it really depends on how much time you spend with them because they have to get to know you and know the rhythm of what is being asked of them.. .so the more you spend getting to do that, the more pleasurable your acting experience will be." Sounds like Parabellum is going to the dogs... and that's the best thing for everyone involved.

More like this
The 50 Most Powerful Characters In The Marvel Universe, Ranked
By Johnny Brayson and Nola Pfau
Lin-Manuel Miranda & Tituss Burgess React To 'Little Mermaid' Casting Backlash
By Radhika Menon
The 'Bachelor In Paradise' Schedule Shifts To 4 Hours Every Week After The Season 8 Premiere
By Brad Witter
Nicola Coughlan Shared A Lady Whistledown Excerpt From ‘Bridgerton’ Season 3
By Grace Wehniainen, Alyssa Lapid and Sam Ramsden
Get Even More From Bustle — Sign Up For The Newsletter