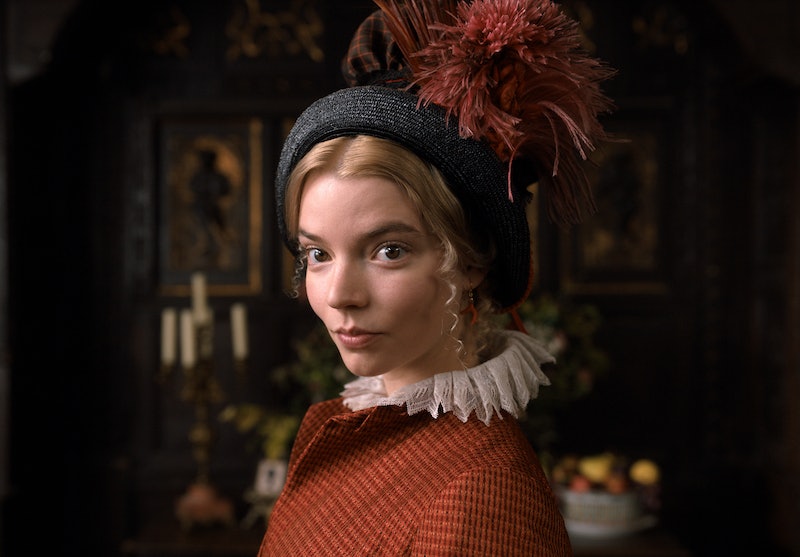 Spoilers for Emma, a 205-year-old book, ahead. In Jane Austen's Emma, the 21-year-old titular character proudly tells her friend Harriet, "I am not only, not going to be married, at present, but have very little intention of ever marrying at all." Despite thinking she knows enough to meddle in other people's lives and romances, Emma seems to be unable to foresee her own future. Because much like Austen's other novels, Emma ends with the marriage of its heroine. So with yet another film version of the book opening on Feb. 21, what happens at the end of Jane Austen's book Emma, might not come as a surprise.

The latest Emma doesn't make any significantly modern changes from the novel's plot, even if its style is remarkably more chic and colorful than other Austen films. Emma, on a matchmaking high after successfully setting up her governess with a husband, schemes to marry off her friend Harriet to Mr. Elton. (Even having Harriet turn down another proposal.) She also interferes in the prospects of Frank Churchill and her arch nemesis, Jane Fairfax. All the while, Mr. Knightley, Emma's sister's brother-in-law, criticizes her methods while secretly falling in love with her. When Emma finally realizes her own feelings for Mr. Knightley ("Oh my god. I love Josh!") the two are married — as are Harriet and her original spurned suitor — making for a happily ever after.

While Austen's novels follow literature's convention of ending a comedy with a wedding, they also question the institution of marriage. "[Austen] used the rituals of romantic comedy to expose what marriage really meant for women who had no other means of economic improvement, hoping that we’d see the injustice of it," Sophie Gilbert wrote in The Atlantic.

Marriage as an economic prospect plagued women of the 19th century, and was a hot topic in another recent female-centric literary adaptation. Greta Gerwig's Little Women bestowed Amy March (Florence Pugh) with a killer monologue that outlined just how much pressure and pain women experience in their attempts to marry well. "And as a woman, there’s no way for me to make my own money," Amy snaps at Laurie (Timothée Chalamet). "Not enough to earn a living or to support my family, and if I had my own money, which I don’t, that money would belong to my husband the moment we got married. And if we had children, they would be his, not mine. They would be his property, so don’t sit there and tell me that marriage isn’t an economic proposition, because it is. It may not be for you, but it most certainly is for me."

Which makes it all the more interesting that the ending of Gerwig's adaptation of Little Women has left viewers somewhat confused. While Louisa May Alcott's novel ends with heroine Jo marrying German professor Friedrich Bhaer, Gerwig's film creates a dream-like story within a story that potentially leaves the finale under the umbrella up for debate. Does Jo marry or doesn't she? Yes to both, depending on how you want to view it.

The ending of Austen's Emma and Alcott's Little Women both end with their lead heroines happily wed. But while this adaptation of Emma sticks to the text, Little Women offered up more of that skepticism that both Austen and Alcott were urging their readers to embrace. Judging from its critical reception, Emma will be enjoyed by audiences. But perhaps the next movie made of an Austen novel (and you know there are going to be more) should take a page from Gerwig's book and offer up a new take on the classic.

More like this
There's At Least 1 Major Difference Between The 'Vampire Academy' Book & TV Series
By Grace Wehniainen
These 25 International Horror Movies On Netflix Prove Fear Is A Universal Language
By Bustle Editors
Read The First Pages Of Emma Rosenblum’s Highly Anticipated Debut, 'Bad Summer People'
By Samantha Leach
What Joyce Carol Oates Knows About Fame
By Erin Somers
Get Even More From Bustle — Sign Up For The Newsletter