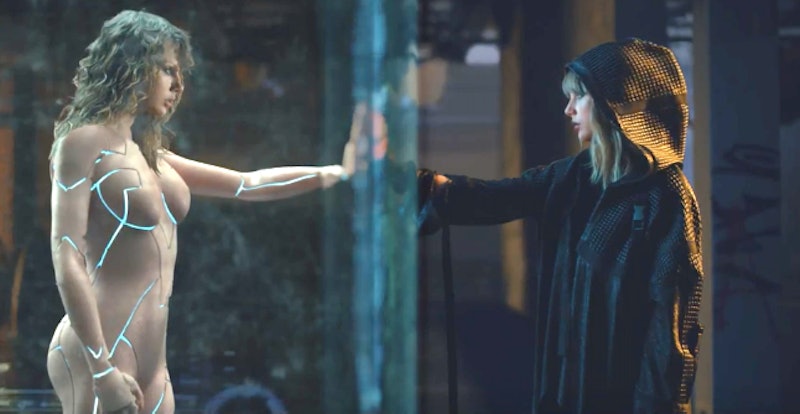 Early on Friday, Oct. 27, Taylor Swift released a new music video, and it is bananas. As far as the internet is concerned, the Evil Kermit meme has been brought back, and it's all thanks to Swift's "Ready For It" music video. The visual is the latest one to drop in advance of Reputation, which is out on Nov. 10. Swift's over-the-top, seemingly Ex Machina-inspired video centers on two competing versions of herself and neither of the "...Ready For It?" Swifts seem especially human. Rather, the dueling androids represent lighter and darker sides of the singer's public persona.

This has been a grueling album cycle for Swift as she attempts to musically reclaim her narrative in the media. Between the reference-heavy "Look What You Made Me Do" video and the message about burning witches scrawled onto a wall as dark Swift is electrocuted in the "...Ready For It?" video, the singer is putting herself (and her fans) through quite a lot over Reputation. So, obviously, Twitter had to resurrect the Evil Kermit meme for this. One of the Swift doppelgängers is literally wearing a black hood, whether this meme was Swift's intentional message or not.

1. There Was This Simple Observation

A clean, elegant, no fuss analogy. But that was only the beginning.

2. This Person Still Needs Some Time To Think It Over

Sometimes, it's easier to ask the question than to accept you've known the answer all along.

3. One Fan Thinks It's Hilarious

Sounds like this user was, indeed, ready for it.

4. And One Spells It Out For Fans

When you look at the side-by-side comparison, there's really no denying their similarities.

In that screenshot, honestly, Swift is rocking it. Nothing against Kermit, though.

6. This Person Is Ready To Throw Shade

Does this count as shade? It's hard to tell. That cry-laugh emoji is so mysterious.

8. One Person Should Really Spend More Time On Twitter

If you're gonna beat the Taylor Swift Meme Machine during an album cycle, you have to stay up pretty late for it. Good effort, though.

If you're a last-minute Halloween planner, congratulations. The Internet has solved your woes. You get to be sassy and topical this year, rather than just a person in a sheet with holes again.

10. Folks Are Willing To Give Swift All The Credit

11. It's Already Migrating To Tumblr

12. Taylor Swift Has Been In On It The Whole Time

Eleven days ago, this fan made a joke about how much Swift likes the Evil Kermit meme. This meme has been "over" for a while now — at least outside of the Swift fandom. Not to go full conspiracy theorist here, but is it possible that Swift loved the meme so much that she intentionally channeled it for the "Ready For It" video? The whole the old Taylor is dead vibe she's pushing for Reputation lends itself to Evil Kermit jokes easily. They almost write themselves.

So, was this on purpose? It's doubtful, but it certainly hasn't stopped Twitter from making the connection. Does she actually like the meme, or does she know it will keep her in the news? Is it ironic, somehow? This is too much. The only thing for certain at this point is that, as long as Swift keeps making music videos, Twitter will always be awake to poke fun at them.

More like this
Everything To Know About Taylor Swift’s 10th Studio Album, 'Midnights'
By Grace Wehniainen and Jake Viswanath
There's A Taylor Swift Easter Egg In Ryan Reynolds' 'Deadpool 3' Teaser
By Marina Watts
Confusion Reigns After Kanye Changes His Instagram Profile Pic To Kris Jenner
By Jake Viswanath
The Try Guys Cheating Scandal, Explained
By Grace Wehniainen
Get Even More From Bustle — Sign Up For The Newsletter