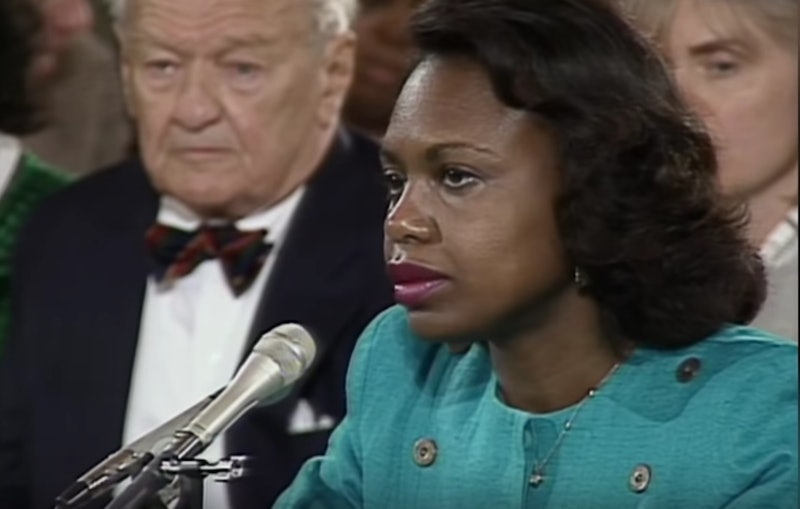 President Donald Trump claimed last week that the FBI isn't interested in looking into Christine Blasey Ford's allegations about Brett Kavanaugh because it's "not really their thing." History tells a slightly different story, however, as the FBI investigated Anita Hill's allegations about Justice Clarence Thomas in 1991. Thomas denied Hill's claims, and the whole FBI probe took just three days, according to CNN.

Ford alleges that Trump's Supreme Court nominee attempted to rape her in the 1980s, an allegation Kavanaugh has categorically denied. Ford's attorney Debra Katz has indicated that her client won't testify about the allegation before an FBI investigation takes place. In a letter to the Senate Judiciary Committee that was obtained by CNN last week, Katz argued that "a full investigation by law enforcement officials will ensure that the crucial facts and witnesses in this matter are assessed in a non-partisan manner, and that the Committee is fully informed before conducting any hearing or making any decisions."

Nevertheless, the committee's chairman, Sen. Chuck Grassley (R-Iowa), announced in a statement that the FBI won't be involved. On Thursday, Grassley gave Ford's attorneys until Friday morning to respond to his request for Ford to testify before the Senate in a Monday hearing, CNN reports.

Ford's allegation quickly drew comparisons to the claims Hill made about Thomas during his Supreme Court confirmation hearings in 1991. When Hill spoke to The New York Times during Thomas' confirmation process, she said she spoke to the Judiciary Committee about her claim that Thomas sexually harassed her while working as her boss at the Education Department and Equal Employment Opportunity Commission in early September (which he denies). She added that an FBI investigation wasn't suggested until Sept. 20.

The White House called for an official investigation on Sept. 23, 1991, and it was completed on Sept. 26. "The White House reviewed the report and determined that the allegation was unfounded," the statement said, per CNN.

Hill has repeatedly criticized the way her allegation was handled two decades ago. "There is no way to redo 1991, but there are ways to do better," she wrote in a New York Times op-ed last week. And the fact that the FBI looked into her claim proves the agency could do the same with Ford's allegation about Kavanaugh — if the White House wanted it to, that is.

"The hearing questions need to have a frame, and an investigation is the best frame for that — a neutral investigation that can pull together the facts, create a record, so that the senators can draw on the information they receive to develop their questions," Hill told ABC News of Ford's allegation. She later added:

We're talking about whether the conditions are actually tenable, whether or not it is going to be anything more than just a sham proceeding so that the senators can say "we gave her a chance to talk" and then move on to doing exactly what they were intending to do before she came forward.

Though Thomas was eventually confirmed despite Hill's allegation, he wasn't confirmed until a few weeks after the FBI's probe concluded. Meanwhile, GOP leaders have called for Kavanaugh and Ford to testify on Monday, and CNN reports that the Senate Judiciary Committee would likely move to vote by midweek if Ford chooses not to testify, as her attorney as indicated.

So far, the Senate's actions suggest nothing has improved when it comes to how sexual misconduct allegations regarding Supreme Court nominees will be handled.