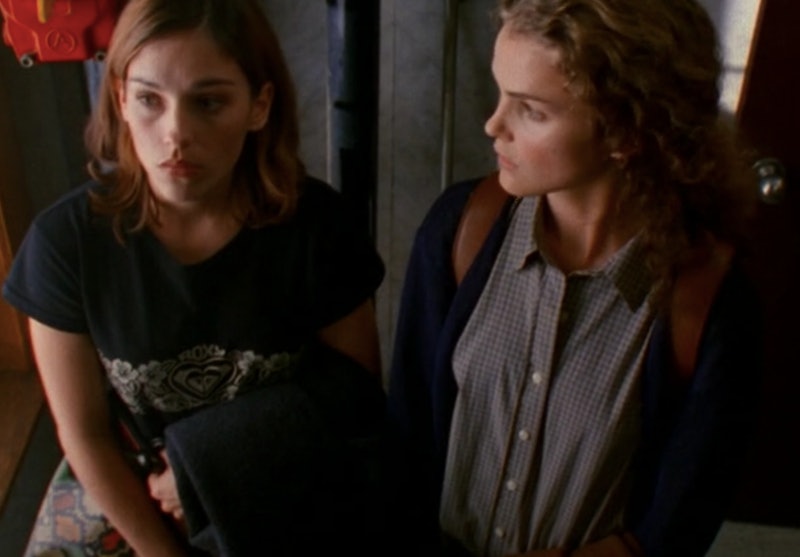 Imagine a single episode of television that, in just 45 minutes, explains how it is that a woman can be unsure of the severity of a sexual assault, why she might hesitate to report it, and what roadblocks and consequences she might face if she finally does. Suppose this episode does this public service so thoroughly that it’d be almost impossible for anyone watching it not to understand why women don’t report. Now imagine that this episode came out not today, but in 1998. Felicity Season 1’s “Drawing The Line (Part 2),” about the immediate aftermath of Felicity’s friend Julie being raped, is that episode. And when I happened to view it just days after Christine Blasey Ford’s sexual assault claims against Supreme Court nominee Brett Kavanaugh were made public (he has denied her claims), the eerie relevancy of Julie’s journey was so strong, it practically ached to watch.

Many defenders of Kavanaugh, including President Trump, have cited Ford’s late timing as evidence that her claims could be false (the alleged incident in which Kavanaugh is said to have attempted to rape Ford is supposed to have taken place when Ford was 15 years old and Kavanaugh was 17, over 30 years ago). Naturally, the response from many people across the country, particularly women, has been voracious and unyielding. From the #WhyIDidntReport movement that began on Sept. 21 as women from all walks of life tweeted about what kept them from immediately reporting sexual assault or harassment, to the nationwide walkout on Sept. 24, which saw many Americans leave their places of work and post on social media with #believesurvivors and #believewomen, the conversations Ford's claims have started have been unmissable.

But despite the mass outcry of women and men who have worked to make it clear that there are myriad barriers, emotional and practical, that can keep victims from reporting sexual crimes immediately, if at all (there’s also a handy and well-vetted list of reasons over on RAINN’s list of “common reporting concerns” if you need a refresher), the issue still seems to need explaining. In fact, when a second Kavanaugh accuser, Deborah Ramirez, stepped forward in Ronan Farrow and Jane Mayer’s New Yorker article, and accused him of sexual misconduct that she says took place when she and the Supreme Court nominee were studying at Yale, Kavanaugh’s denial again cited the “last-minute” nature of her claims:

Which brings me to this 1998 episode of Felicity. While a recent Pew study showed that social media is helping change people's minds about major issues, pop culture was the original medium for delivering personal connections in hopes of changing opinions. As such, this Felicity episode is worth showing to that friend or family member who just can’t wrap their head around what would make a survivor or rape or sexual assault wait decades to tell someone about it. In fact, Felicity even muses halfway through the episode that Julie might never have told anyone about her rape if she hadn’t pressed Julie for a reason as to why she was so upset.

The heart-wrenching 20-year-old episode (streaming on Hulu right now) finds Julie, upon urging from Felicity, seeing a University doctor to get checked out for any health issues as a result of her rape. Even though she and Felicity have established that what she experienced — being held down by her boyfriend, Zach, as he penetrated her despite her numerous requests for him to stop — is rape, Julie continually questions that reality as she speaks to the doctor. Her rapist “wasn’t violent” and he didn’t “rip my clothes or anything,” he told her loved her afterward, and by all accounts he doesn’t know what he’s done is wrong. “I mean, you wouldn’t call this rape, right?” she pleads, to which the doctor answers that she would.

Immediately after this crushing confirmation, two policemen — total strangers — approach Julie and ask her to give a statement. She asks if she can delay reporting and they tell her she can, with a forlorn look that almost betrays the knowledge that waiting will only raise further questions about the veracity of her claims. When Felicity seeks answers for how Julie can report, she's given a laundry list of reasons as to why victims often get nowhere, even if they report a rape immediately. Later, in the cafeteria, Julie’s boyfriend approaches her, completely oblivious to the true nature of their sexual encounter and Julie ends the moment wondering, “What is wrong with me?” She’s wracked with guilt for even thinking that she could have been raped.

When the fact Julie was raped makes it back to Zach, he corners her when she’s alone and berates her for calling their intercourse rape, yells that she’s the one who kissed him at the bar (which sounds a lot like the “she was asking for it” excuse), and screams that “it wasn’t perfect but it wasn’t a crime.” He ends his tirade by aggressively grabbing her and warning her that reporting the rape would effectively end his college career, as if she’s the one to blame in this situation.

And she believes it.

Her reaction should sound familiar, especially considering that a recent George Washington University study found that 62 percent of the college-age rape victims who were interviewed for the study blamed themselves for their assaults. But Julie’s self-blame goes deeper. “It was my fault with happened with Zach, OK? This is the message that I give out to guys. That’s my talent. Yours is being a genius, mine is giving this message out to guys,” she says to Felicity, before revealing that this isn’t the first time she’s been sexually assaulted.

After a friend finally convinces her that it’s not her fault a few days after the rape, Julie reports it to the university — reporting it to the police isn't much of an option after a university counselor points out that the D.A. doesn’t take rape cases where alcohol was involved (which makes sense, for 1998, considering recent landmark decisions like the one in the Brock Turner case). But even after she’s given the pep talk she needs, Julie is listless and visibly depressed, especially as she enters the counselor’s office to report Zach. And when Zach is immediately removed from the university, there’s no joy in Julie's expression. She’s not doing a victory dance. She’s still sad, destroyed, and small.

The episode does, unfortunately, take the misstep of making Zach’s exit feel like immediate closure for Julie, when according to RAINN the effects of rape often last far beyond a few days (94 percent of women who’ve been raped experience PTSD symptoms up to two weeks following a rape, and 30 percent experience it for up to 9 months after, per the organization). Even still, if watching Julie go through the emotional wringer for an episode isn’t enough to convince someone of the pain and anguish that come not only with experiencing rape, but the seeming impossibility of speaking about it to others and eventually (maybe) reporting it to authorities (who might only ask that the victim speaks even more often and more publicly about the most hurtful, traumatic moments of their lives) I’m fairly certain nothing will.

And OK, Felicity is fiction, and not even perfectly progressive fiction. But in Julie’s story, there are shades of every “late” reported assault claim that’s come into the national spotlight in the year since #MeToo and #TimesUp ignited the conversation. And if this soapy teen series was able to get that feeling so right, decades before this story was constantly splashed across phones and computer screens everywhere on a near daily basis, there just might be a whole lot of truth in it.