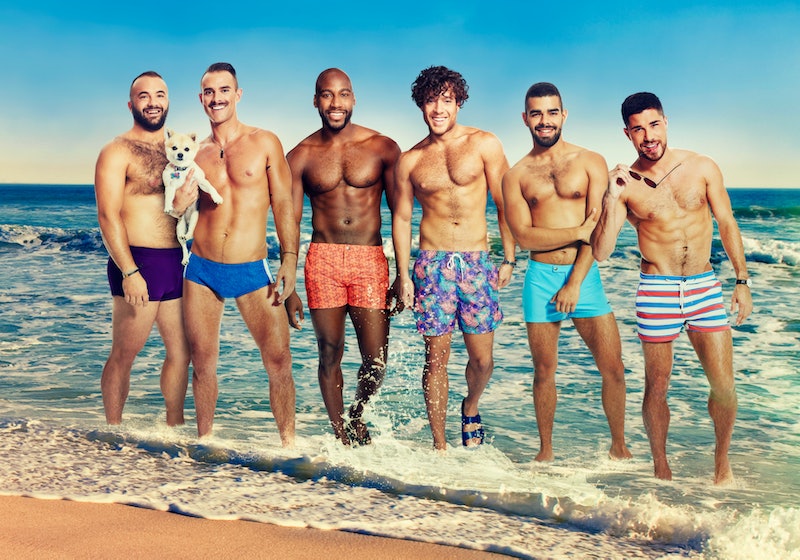 Spring may be in full swing, but my mind is totally on summer. If you're feeling the same, then you're definitely going to want to check out Logo's newest reality series that's going to help fast-forward you through this season and into those lazy, hazy, crazy days of summer. Fire Island premiered on Thursday, April 27 at 8 p.m. ET, and it's already serving up the hottest spring ever filled with beaches and budding romances. Of course, the Fire Island cast is going to be a huge part of what makes this new show entertaining.

In case you haven't heard the buzz surrounding Fire Island, let me fill you in on what this new series is all about. The show follows the summertime adventures of six young professionals as they head off for fun and sun on Fire Island, the historically gay-friendly island off the South Shore of Long Island and to the east of New York City. Along the way, there will be hookups, blowups, and dance-offs as this sextet tries to make the most of the summer — at least that's what the series trailer tells me.

Sure, this sounds like an intriguing concept, but a reality show is only as strong as its cast. Luckily, Fire Island has a particularly dynamic one filled with guys whose lives are just as interesting off the show as they are on it.

More like this
Adam Lambert Called Out The George Michael Biopic Over Potential Casting
By Sam Ramsden
'Love Island' Has Added Yet Another Bombshell To The Villa
By Bustle UK
'Love Island's Haris Insists Street Fight Video Doesn’t Show Full Story
By El Hunt, Darshita Goyal and Sophie McEvoy
'Love Island's Jess Wynter Is Keen To Avoid Making This Mistake Again
By Sophie McEvoy
Get Even More From Bustle — Sign Up For The Newsletter
From hair trends to relationship advice, our daily newsletter has everything you need to sound like a person who’s on TikTok, even if you aren’t.