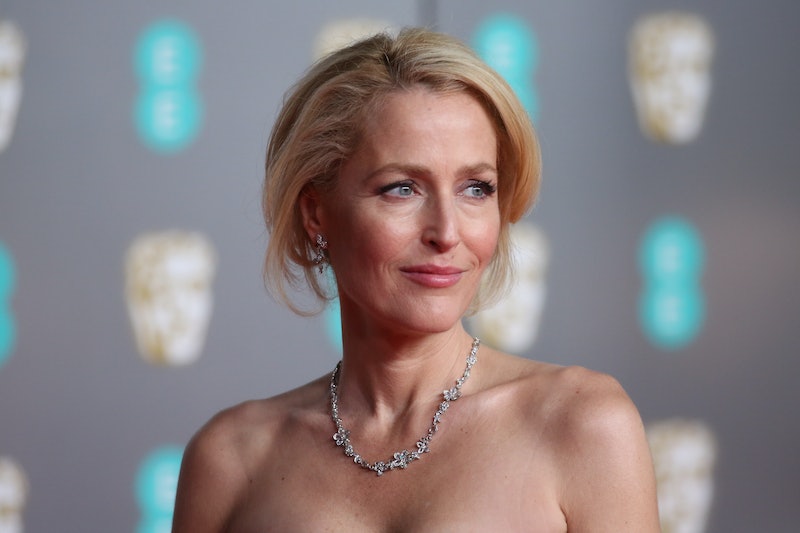 Over the last four years and three seasons, The Crown has built up a super loyal fanbase – and it's easy to see why. The dramatisation of the Queen’s life has been totally gripping, and season four promises to be even better than the last. Olivia Colman will return as Queen Elizabeth II and Helena Bonham Carter as Princess Margaret. And they’ll be joined by another British acting powerhouse, who will portray one of the most influential politicians of all time: Conservative Prime Minister Margaret Thatcher. Today, we got a first look of Gillian Anderson as Margaret Thatcher for The Crown series four, and she’s barely recognisable.

With a very straight suit, big hair, and classic jewellery, Anderson has been spotted for the very first time on the set of Peter Morgan's royal epic. The fourth instalment will pick up where season three left off (in 1977) and will cover the Thatcher era. Anderson will play opposite Colman, exploring the relationship that the Queen had with the Iron Lady.

Speaking about joining The Crown, Anderson told Harpers Bazaar that “Thatcher was undoubtedly formidable but I am relishing exploring beneath the surface and, dare I say, falling in love with the icon who, whether loved or despised, defined an era." It’s certainly a significant shift from her role in Sex Education.

As series four of The Crown will start right at the beginning of the Thatcher era (she was elected in 1979 and remain in office until 1990) it’s likely the series will touch on the marriage of Prince Charles and Lady Diana Spencer (played by Emma Corrin), the Falklands War and miners' strikes in 1984-1985.

Thatcher remains a divisive politician, even to this day, but Anderson appears to be excited to take on the role. “I am so excited to be joining the cast and crew of The Crown and to have the opportunity to portray such a complicated and controversial woman," she said about being cast for the role.

According to RadioTimes, we can expect season four of The Crown to land on Netflix at the end of 2020.

More like this
'The Lord of the Rings: The Rings of Power' Revisits Iconic Spots From 'The Hobbit'
By Darshita Goyal
Everything To Know About 'The Last Of Us' TV Adaptation
By Sophie McEvoy and Radhika Menon
You’ll Definitely Recognise Both Of Ty Tennant’s Parents
By Maxine Harrison
'House Of The Dragon’s Theo Nate Is A “Massive” 'GoT' Fan
By Maxine Harrison
Get The Very Best Of Bustle/UK