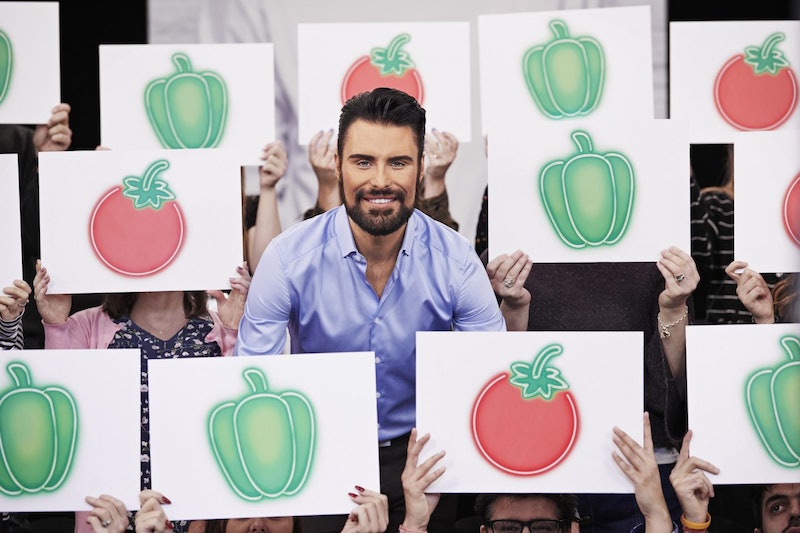 It's the 90s TV reboot I didn't know I needed, and yet, I'm so ready for the upcoming Ready Steady Cook revival. It's been 10 years since we last watched home cooks attempt to make somewhat edible meals in under 20 minutes. Unlike its boujie cooking competition counterparts, BBC's Ready Steady Cook typically provided more mishaps than Michelin stars. And, I'm here for it. Yet, for the TV purists doubting whether the reboot will revive's the show's wholesome, largely awkward charm, the new trailer may bring little relief. Released on Friday, the Ready Steady Cook reboot features new chefs, new challenges, and a new presenter in the form of Rylan Clark-Neal.

So, alas, no Ainsley Harriet (sorry, he's really not coming back). It's safe to say Rylan has a huge chef's hat to fill. Regardless, the This Morning presenter looks perfectly at ease in the Ready Steady Cook kitchen. In the trailer, he's shown sans-chef's hat, but primed to deliver the witty one-liners that he's become known for. Standing a little too close to a blow torch he jokes: "one minute left and I've still got my eyebrows!"

Rylan's a natural. After all, it seems the presenter has unwittingly become the face of cult British TV revivals — remember Supermarket Sweep? Well, Rylan rebooted that too and did a fine job of replacing the late Dale Winton.

Clark-Neal spoke to The Sun about the exciting prospect of getting the show back on air, saying: "I'm so excited that Ready Steady Cook is finally coming back to our screens. To be asked to host such an amazing show for the BBC is such a privilege. After making the finals of Celebrity MasterChef, I know how tough cooking under pressure can be."

Though there's a lot of 'new', there's also much of the old format. In case you're not au fait, two members of the public will be paired with two celebrity chefs and split into teams. The cooks will have 20 minutes to cook a dish made with ingredients they purchased with under £10. Then, in the second round, they will have just 10 minutes to make a dish based on random ingredients revealed by the audience - including wildcards like cornflakes. This is nail-biting stuff, people. And yes, I hear your cries, the red tomato and green pepper placards are very much back in action and the audience will have the final vote on who wins.

I'm keen to see how Ready Steady Cook translates in 2020. After all, though they've slightly increased the budget, £10 in your average supermarket still doesn't go very far these days, am I right? Yet, I'm ready for all bonkers creations and plating disasters when the show premieres on Monday, March 2 at 4.30pm on BBC One and BBC iPlayer.