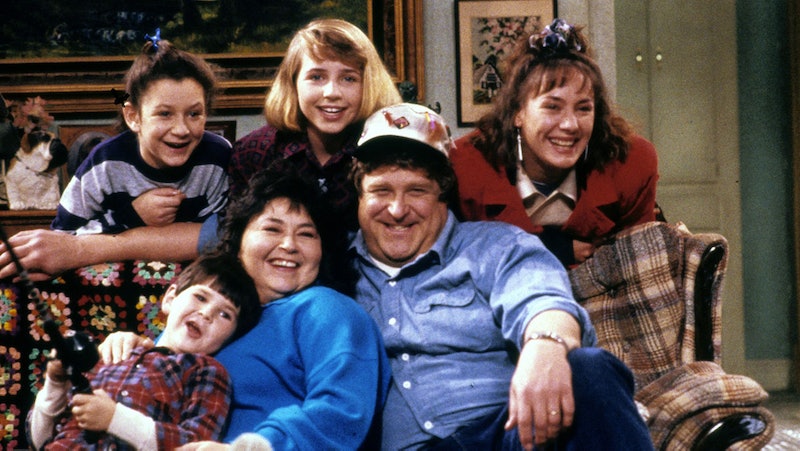 Whoever said that '90s television sitcoms didn't have a place in the new millennium lied. The first photo from the Roseanne revival cast has been released, and the old-school cast appears to be happy to get back in action — John Goodman included. Joining for the very first table read for its premiere episode entitled "Twenty Years of Life," original cast members Roseanne Barr, Laurie Metcalf, and Michael Fishman, along with Goodman, are pictured laughing with executive producers Whitney Cummings and Bruce Helford. The photo totally reeks of nostalgia, as the cast appears to be reuniting in the set for the old Conner residence. According to a statement released by ABC in May 2017, the revival will be centered around the Conners living paycheck to paycheck in the year 2018 — drawing to the same economic struggles the working class family faced in the '90s. But, an appearance from Goodman shows that fans should expect to see an entirely new and improved storyline, parting from the show's final season.

You may recall Roseanne's husband Dan Conner, played by Goodman, dying at the end of Season 8 after suffering a heart attack. But according to TVLine, the eight-episode revival shows Goodman's beloved character to be "very much alive."

Don't fret, however. The sitcom delivering some major plot twists isn't anything new. The last two episodes of Roseanne's series finale caught a ton of '90s fans off guard with its complete reversal of occurrences. Season 9 not only showed the family coping with the loss of Dan, but also centered around the Conner's Illinois State Lottery win. The blue collar family enjoyed living amongst the rich and famous for the majority of the season, but towards the end it was revealed that their new lifestyle was all a dream — or rather, a series of events concocted for a possible book Roseanne, as a way to deal with her husband's death.

In the final moments of the series finale, the character of Roseanne retells,

"My writing’s really what got me through the last year after Dan died. I mean at first I felt so betrayed as if he had left me for another women. When you’re a blue-collar woman and your husband dies it takes away your whole sense of security. So I began writing about having all the money in the world and I imagined myself going to spas and swanky New York parties just like the people on TV, where nobody has any real problems and everything’s solved within 30 minutes."

Roseanne also revealed that details of many of the characters present in her "writings" were changed, raising the burning question: Was the entire series just a retelling of events from Roseanne's fictional memoir? Holding on to that potential premise would help to make sense of the revival's new plot. After all, with the return of Goodman and both of the show's Beckys, Lecy Goranson (the original) and Sarah Chalke (who took over the role after Goranson's Season 5 departure), the revival episodes could totally just be pulled from Roseanne's vivd imagination.

The 2018 revival could take so many turns and introduce plenty of new storylines — including Roseanne being a successful writer. And seeing as being a famed writer doesn't necessarily mean that the money is rolling in by the truckload, the Conner family still living their modest, blue-collar lives could definitely still fit with the new premise. Nothing seems to be off limits for this nostalgic reboot, and Goodman rejoining the cast as the head of the Conner household further proves that the sky is the limit in Roseanne's universe.

Editor's Note: A previous version of this story incorrectly spelled Roseanne in the headline. It has since been updated.

More like this
A New 'And Just Like That' Table Read Pic Confirms A Key Character's Return
By Jack Irvin and Grace Wehniainen
24 Years Ago, 'Friends' Dropped Its Most Underrated Ross & Rachel Episode
By Grace Wehniainen
Netflix Reveals First Look At Wednesday In The 'Addams Family' Spinoff Series
By Bustle Editors
20 Photos Of The 'Hocus Pocus' Cast Then & Now
By Radhika Menon
Get Even More From Bustle — Sign Up For The Newsletter