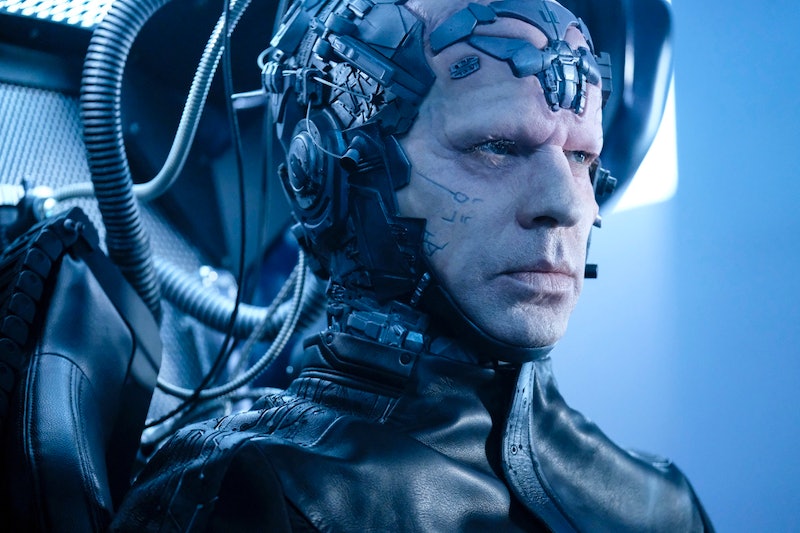 This season’s big bad on The Flash is shrouded in mystery, and his brief appearances have fans on the internet thinking really hard. Fans have been coming up with their own theories on The Flash villain The Thinker and his plans, trying to say a few steps ahead of the show. Some of the most interesting possibilities so far are accumulated here, but first, a refresher on the character may be in order.

Played by Neil Sandilands, the Thinker (aka Clifford DeVoe) has something to do with the metas that Barry accidentally created when he came back from the Speed Force. As his name suggests, he thinks, plans, and strategizes more than any previous villain the Flash has encountered. He's a character in DC comics, but Cinemablend reported that showrunner Todd Helbing told reporters at San Diego Comic-Con, “We’ve reimagined The Thinker, in a way. He has a way of being involved and not being involved at the same time.”

And that distanced involvement is apparent. Through his surveillance and through his robot, the Samuroid, The Thinker was able to spur Flash’s team to save him from the Speed Force. He is clearly a villain, though, as he knew that Flash returning from the Speed Force would cause metahumans to be created. Despite clearly wanting to use these new metas for their powers, he has waited for the Flash to discover them. Watching from afar, he has studied and analyzed the first two, Kilg%re and Havoc, and let them cause mayhem that put civilians lives in jeopardy.

Even when it looks like he has been defeated, The Thinker has been several steps ahead. It seemed to be his plan all along to allow his Samuroid to be beaten so that its remains would be taken to Barry’s home base, at S.T.A.R. Labs. With a recording device inside the helmet, he can now survey the team and knows all of their secret identities. But what does he want?

The YouTube channel, What the Geek recently posted a video suggesting a theory that connects the Flash and the Thinker through the Speed Force. It doesn’t take eagle-eyed viewers to note that DeVoe has marks on his face around his infamous helmet (something that transferred over from the comics). While it's not clear yet what they mean, the symbols clearly resemble the symbols that Barry drew on walls following his escape from the Speed Force. This points to Thinker getting his powers from the Speed Force. Since he hasn't appeared in previous seasons, perhaps it was the Speed Force storm shown at the end of last season that gave the Thinker his superior mental abilities.

Another YouTube user, The Black Lion, got a bit more specific about what DeVoe could be planning for the Flash. He suggests that Thinker will frame Barry Allen for murder, and he makes a compelling case. Back in the season premiere, when Barry had returned but his mind was a bit scrambled, he spoke almost exclusively in quotes from past episodes. There was one quote that wasn’t from past episodes however. Barry said, “Your honor, I’m innocent. I didn’t do this, I didn’t kill anyone.” Back in Season 1, Black Lion notes, when Allen was running back in time to save his mother, he saw his life flash before his eyes, and in one of the vignettes, fans see him imprisoned. That hasn't happened yet on the show.

One final theory is mine. As discussed above, the Thinker is playing the long con. His strategic use of the Samuroid’s surveillance camera is an example of that, and he might be doing it again. In Episode 3, he suggested that Havoc would be “easily manipulated,” and he thinks that of the rest of the metahumans, as well. It may be the case that he wants the metahumans to be captured by the Scarlet Speedster and his team so they can all be put into one place: Iron Heights. Then, he could break them all out of prison, with the implication being they would trust and feel indebted to him for their freedom.

Perhaps, the obvious solution to the speculation is just to wait and see what happens. In an interview with TVLine, Helbing suggested that the audience is ahead of Team Flash, as far as what they know. The producer also hinted at the Thinker’s motivations, saying that rather than out of a desire to rule the world, he’s executing this evil plan for “personal reasons” as yet unknown. He went on to imply that the Thinker isn’t to be underestimated. He said:

“Literally [he] is the smartest guy on the planet, so there’s a lot of chess pieces that he’s moving around simultaneously. As our team is figuring out who he is and what they think the plan is, there’s a lot of fun [as we] show the audience information and then have our team catch up to that information or surpass it. It’s a big mystery.”

The Thinker is a compelling villain, and unlike previous big bad's, his identity isn't the mystery. What remains to be seen is what exactly the Thinker wants out of controlling Central City. Who knows? One of these educated guesses could be right on the money.