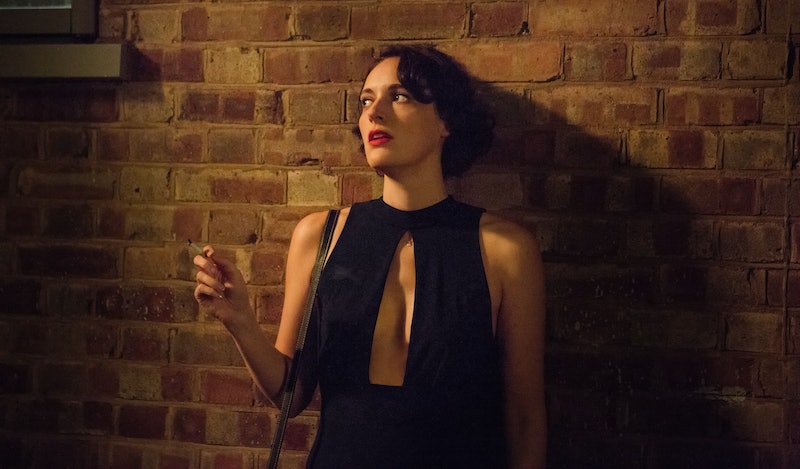 Spoilers ahead for Fleabag Season 2. Fleabag Season 2 ends even more devastatingly than the first: after opening herself up to love for the first time since her best friend's death, Fleabag ends up crying alone at a bus stop with her heart newly broken. It would be a difficult blow for anyone, but particularly for someone who experiences hurt as viscerally as the show's anti-heroine — and who tries so exhaustively to bury her pain. But gut-wrenching as it may be, there's also a lot of hope in Fleabag's final moments.

In Season 1, Fleabag had closed herself off from almost everyone around her. She used sex and humor to suppress her grief, pushed her sister and father away, and either ran away from or acted out in any mildly uncomfortable situation. But when Season 2 picks up, she's done a lot of personal growth, and though she's certainly still working through some of her issues (aren't we all?), she's able to have much healthier relationships — even to start one anew.

Over the course of the season, she falls for a "hot" priest played by Andrew Scott of Sherlock. He is, in many ways, the perfect match for her: foul-mouthed, heavy-drinking, and irreverent, but thoughtful. He can keep up with her wit and humor, but also challenges her to be more open and vulnerable — something that, since we've met her, Fleabag has shrunk away from. However, he's also deeply religious (and celibate) and Fleabag continuously struggles to hold back her feelings for him — both physical and emotional.

Eventually, the two do sleep together, but their relationship was doomed from the start, and the season ends with him walking away from her at the bus stop. Fleabag had already accepted that the priest wouldn't give up his vows for her, but she still wanted him to know how she felt. "You know, the worst thing is that I f*cking love you. I love you," she says. When he goes to respond, she cuts him off and says, "No, no don't. No, let's just leave that out there just for a second on its own. I love you."

The fact that she's leaning into this feeling — even prolonging her vulnerability — rather than running away from it is monumental for Fleabag, and the culmination of a lot of difficult emotional growth. The priest was certainly a catalyst for her, but it's been clear from the beginning of the season that she's made her personal development a priority.

In the first episode, Fleabag and Claire are forced to have dinner together after months of not talking. When Claire has a miscarriage mid-meal, Fleabag covers for her, and it bonds them. Slowly, they're able to repair their fractured relationship. In the past, Fleabag might have antagonized her sister about her horrible, alcoholic husband and her hopelessly awkward crush on her new co-worker, Klare, but instead she spends the season supporting her. Ultimately, it's Fleabag who gives Claire the courage to leave Martin and proclaim her love for Klare.

Fleabag is also able to reconnect with her father, who, though still involved in her life, has been distant from her since her mother's death four years ago. When he hesitates to go through with his marriage to Godmother, it's Fleabag of all people who convinces him to walk down the aisle. She may hate her father's new wife (the brilliant-as-always Olivia Colman), but Fleabag is able to realize that she makes her dad happy, so she puts her feelings aside. She doesn't even make a scene at the wedding! If not reacting to her godmother's incessant baiting isn't a lesson in growth and self-restraint, frankly, nothing is.

The emotional fortitude that Fleabag exhibits in the Season 2 finale wasn't possible for her at the end of Season 1 — especially when you consider her actions during the sexposition. But it was exactly this type of progress that inspired Waller-Bridge to revisit this character for one last season. As Waller-Bridge told Bustle at the New York City premiere of Season 2, "I'd already felt like we'd come to an end the last time and actually what was left to do with that character was that final bit of growth before she was ready to go. And I feel like I'm ready to go — she's gone. She's off. She's having a good time on her own now."

Fleabag is able to experience love — both familial and romantic — in Season 2 because she finally thinks she's worthy of it, and she's willing to risk getting hurt for the sake of it. She's by no means "healed" from her past trauma, but the look and little head shake she gives to the camera as she walks away from the bus stop in the final scene confirms there's no reason to be worried about or feel bad for her. Fleabag no longer needs us, the audience, as a mental escape or coping mechanism; she's going to be OK on her own. And given where Fleabag started when we met her, that's the most hopeful ending of all.