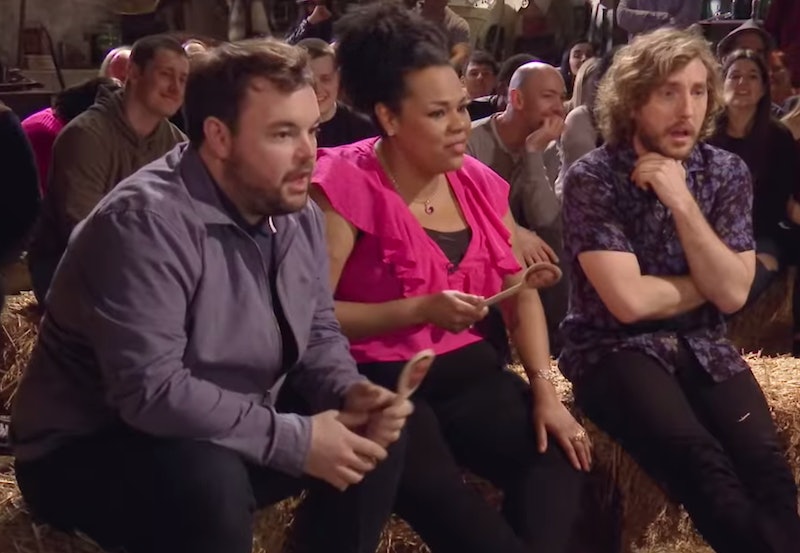 Netflix's new game show is unique in that not just the contestants, but the Flinch hosts, too, compete in the series. Each episode, eight contestants go head-to-head in three rounds of flinch tests. They're shot at with paintball guns, caged up with animals, and put into a variety of other ridiculous scenarios all to see if they'll flinch. Each host is represented by one contestant per round (and the representative changes every round). Whoever's representing contestant flinches the most, the corresponding host has to endure their own "Flinch Forfeit," where they're subjected to the same kinds of tests the contestants just were.

Flinch has three comedians acting as hosts. There's Seann Walsh, an English comedian who's also known for his time as a competitor on Strictly Come Dancing — sort of the UK version of Dancing With The Stars. Lloyd Griffith is another English comedian. and he's well-versed in hosting duties; he used to host BBC Three's Taxi To Training show, on which he interviewed soccer stars (or football stars, as they say in the UK) on their way to practice, according to the Grimsby Telegraph. The third and final host is American comedian Desiree Burch. She's since moved to London, though, and was recently on the UK game show Celebrity Game Night, so she knows her way around a competition series.

All three hosts were relatively local to the Irish barn were Flinch was filmed — and most of the cast is from the UK area as well. There's no prize for the contestant who flinches the least except bragging rights, but it is kind of interesting to see the hosts endure what they just put the contestants through. It makes it a little less like torture porn and more like a bonkers game that everyone is involved in. (It's worth noting that Netflix begins every episode with a disclaimer that all the stunts were performed on the contestants in a safe manner.)

The flinch tests range from horses eating grain off your body to being shot at with paintball guns to having to smell really rotten food. Points are generally good in competition games, but that's not the case here. More flinches equals more points. And if you do flinch, you get electrocuted. But hey, these are all consenting adults who presumably signed a waiver, so have at it. At the very least, the losers get to take comfort in watching one host go through a similar flinch test each episode. Unfortunately for the hosts, their representatives are chosen at random each time, so it's really a gamble who will be able to make it through the test without flinching — and save them for having to risk doing so themselves.

Overall, it's a weird concept for a show — especially since there's no known cash prize for the winner. But if these contestants want to do it, the hosts want to host it, and people want to watch — well then, sure. There have been stranger things, right?