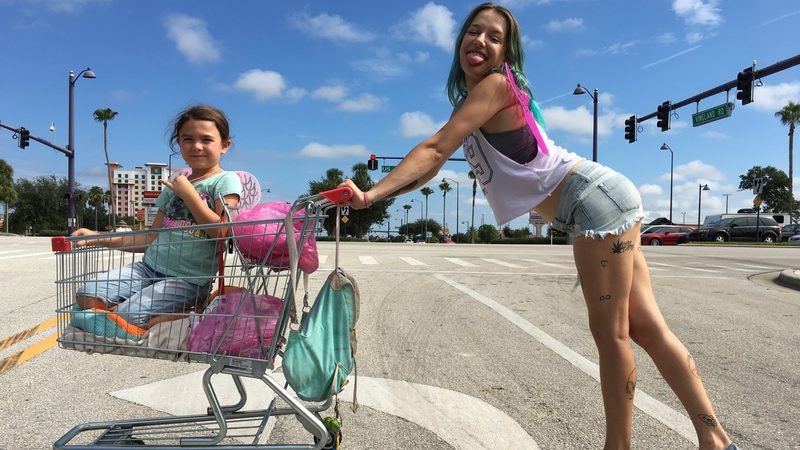 For so many people, Disney World is practically synonymous with childhood. Whether you made the trip to Florida every summer with your family or visited the Magic Kingdom just once or twice, chances are that you have at least a few nice memories of Mickey and Co. etched into your brain. But if you see the stirring new film The Florida Project, set in the seedy motels next door to Disney, be prepared for the way you view Orlando, the home of "the happiest place on Earth," to utterly, permanently change.

Directed by Sean Baker (Tangerine),The Florida Project chronicles a summer in the life of 6-year-old Moonie and her friends, all of whom live with their families in the motels located a quick ride away from Disney. Moonie's home is called "The Magic Castle," but her life is anything but; although the film, out Oct. 6, is largely told from the curious, carefree child's point of view, the viewer sees the disturbing reality behind Moonie's existence. Her single mother, Halley, sells stolen goods in order to get by; when times get harder, she turns to sex work, often with an unaware Moonie hiding in the bathroom of their tiny live-in motel room. With little supervision, the girl and her friends spend their days causing mayhem and running amok, frequently evading serious danger and, occasionally, diving headfirst right into it.

Moonie is happy, but only because she's too young to realize she shouldn't be. Her home is constantly in flux, as whether she and Halley can stay in their room depends on if the 20-something can swing the rent that month, and she's such a regular witness to R-rated events and conversations that words like "ratchet" and "twerk" — and worse — are parts of her vocabulary. Watching Moonie go about her days with no idea of how precarious her life is is heartbreaking; you know that eventually, her innocence will wear off, and events towards the end of the film unfortunately indicate that that'll happen sooner, rather than later.

A story like Moonie's would be devastating to watch in any location, but the fact that she lives so close to Disney World is an extra punch in the gut. As The Florida Project portrays, millions of people visit the Magic Kingdom every year with no awareness of the people living in the countless motels they pass along the way. Families like Moonie's are just part of the scenery, and on the rare occasions they do interact, the tourists, at least in the film, treat the motel-dwellers with pity at best, disdain at worst.

For tourists, Disney World is a place of comfort and joy, not to mention money; even visitors struggling financially have the means to attend the park, with many of them shelling out hundreds of dollars for the promise of a day's worth of family fun. Disney has always been a symbol of happiness and prosperity, especially for the many children who have dreams of meeting princesses and dancing with Mickey.

Not Moonie and her friends, though. For these kids, their proximity to the theme park is meaningless; due to the less-than-stellar examples of their parents, the only role Disney plays in the children's lives is through the clueless tourists they scam for money and ice cream. All throughout the film, Moonie is worlds apart from the magical fantasy land.

That's not to say the main takeaway of The Florida Project is to pity Moonie and her friends, however. Director Baker and his co-writer Chris Bergoch take great pains to showcase the genuine joy their 6-year-old protagonists feel in their lives, as well as the ignorance of the tourists who automatically assume the worst of the children they encounter. Moonie is most certainly a victim in her situation, forced to reckon with her mother's bad choices and society's lack of mobility for the working class, but she is the hero of her story, too. Her innocence about her situation is her armor, shielding her from a world that, if she saw it, would strip the exhilaration she feels right off.

Moonie may be fictional, but her experiences and emotions feel breathtakingly real. It's impossible to watch The Florida Project and not be deeply moved — by Moonie's naivety, by her mother's actions, and, most of all, by the fact that these families are so close to the happiest place on earth, but couldn't feel farther away.