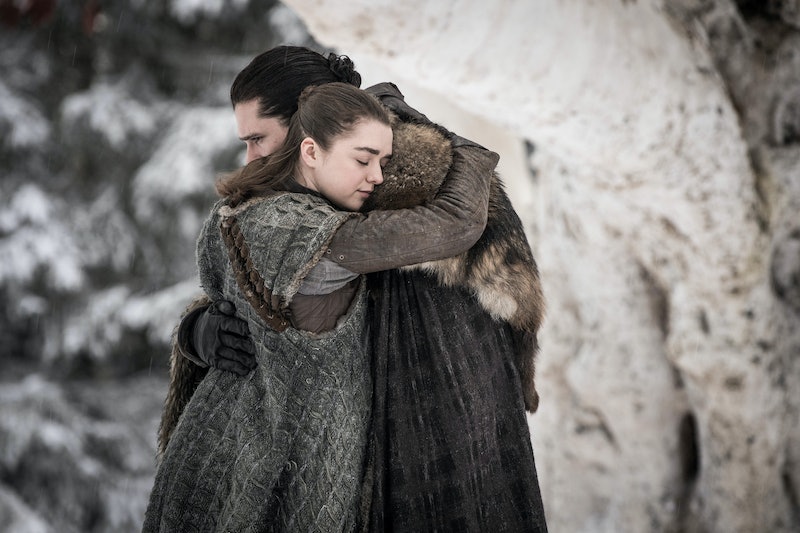 Fans have been dreading this moment since Game of Thrones premiered in April 2011 welcoming them into the medieval fantasy world of Westeros — a world they didn't know they couldn't live without. Take that imminent grief fans will experience when the show ends on May 19, and multiply it endlessly when you think of how the cast feels about the Game of Thrones finale. In short, they've been grieving it since filming wrapped. Now, they're being forced to relive those emotions all over again.

People had the opportunity to chat with the cast about their feelings before the finale airs, and to no one's surprise, the tears were aplenty. "It was exciting and sad and overwhelming," Lena Headey, who plays Cersei Lannister, told People. "Being a part of Thrones has undoubtedly brought more opportunity than I'd ever dreamt of and for that I am eternally grateful."

For many of the actors featured in the show, GoT has been their "big break." "On my final day I realized that this has been my training ground," said John Bradley, who plays Samwell Tarly. “This is the experience that's taught me everything I know about how to be an actor for camera. So that's going to be the legacy going forward in terms of everything. All of my know-how was learned on this job. I didn't have anything going in. Whatever I do in the future is going to owe an enormous debt to my time on this show and it's been the best training ground and learning curve I could have hoped for."

"I remember thinking that I wasn't going to humiliate myself by crying," Gwendoline Christie, also known as Brienne of Tarth, explained of her last day on set. "Because they filmed it for the behind-the-scenes documentary." The fans at least have that to look forward to in spite of the story's end. Appropriately titled The Last Watch, the film was produced by HBO and will air on the network on May 26.

According to HBO, the doc "delves deep into the mud and blood to reveal the tears and triumphs involved in the challenge of bringing the fantasy world of Westeros to life in the very real studios, fields and car-parks of Northern Ireland … Much more than a ‘making of’ documentary, this is a funny, heartbreaking story, told with wit and intimacy, about the bittersweet pleasures of what it means to create a world – and then have to say goodbye to it."

The Stark sisters, Sansa and Arya, played by Sophie Turner and Maisie Williams, both admitted to People that they dreaded the final "Cut!" They couldn't picture it actually happening. "I remember just crying and crying and crying," Turner said. "I think the most memorable thing was that I knew that [the end] was coming so I was waiting for them to say, 'Cut.' They would say 'Cut!' and I would think, 'Oh my God this is it,' and I'd start crying. And then they'd say, 'Moving on to the next setup.' And then I’d have to be like, 'Okay. Keep it together. Keep it together.' I just remember just being on the edge of tears all day."

Her TV sister didn't fare much better. "I remember trying not to think about it. Doing everything I could to not think about it," Williams admitted. “Like wandering around like, ‘Oh yeah, I’ll have an ice pop.’ 'Oh, the weather is so nice, am I right?' 'Look at that horse, so cute.'" It seems even the woman who killed the Night King wasn't ready to say goodbye.

However, it's the Mother of Dragons who may have had the hardest time coming to terms with letting the series go. Emilia Clarke told the publication that she could barely get through Daenerys Targaryen's last words. "The last day on set, I remember the fact that I couldn't get through the speech that I was saying near the end, because I was kind of crying too, too much," she recalled. "I can't say too much else because it really would be a spoiler."

It won't be a spoiler for much longer, and there's no doubt that fans will be crying right along with her when the finale airs.