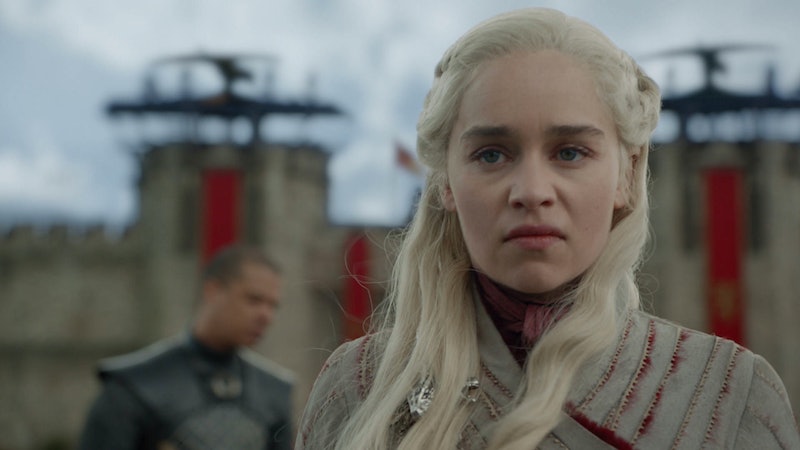 Sunday night's latest Game of Thrones episode "The Last of the Starks" showed the survivors of the Battle of Winterfell celebrating their victory against the Night King. And while there was plenty of ale and wine to go around, eagle-eyed fans spotted a beverage that clearly didn't belong. But now the mysterious Game of Thrones coffee cup has been removed from the episode digitally by HBO, leaving all of Westeros without caffeine once more. (No wonder everyone always seems to be in a terrible mood.)

After the internet was made away of the coffee cup's presence in the episode, it set off an array of hilarious memes, even going so far as to give Daenerys yet another name to add to her already long list of titles — the latest being that the Mother of Dragons is also the "sipper of lattes." Later in the day, HBO released an official statement on the matter, admitting that the coffee cup's placement was indeed a mistake and clarifying that it wasn't a Starbuck container but rather a cup from their craft services table. The statement, which was provided to Bustle, read as follows: “The latte that appeared in the episode was a mistake. Daenerys had ordered an herbal tea.”

Since then, HBO also confirmed to Entertainment Weekly that the cup has since been digitally edited out of both streaming services, HBO Go and HBO Now.

The scene in question takes place around the 17:40 mark of Season 8, Episode 4, with the cup sitting on the table close to where Daenerys was sitting while Jon Snow was getting praised by all the men for riding a dragon — something Dany has been doing for years, but sure, no big deal. However, now that the network has removed the cup in question from the scene entirely, it's almost like it never happened. Granted, this is only on the HBO GO and HBO Now platforms, so if you opted to DVR the episode when it originally aired, then you can watch that cup pop up on your screen until your heart's' content.

During an interview about this prop blunder on Monday, Game of Thrones art director Hauke Richter told Variety that the mistake has been “so blown out of proportion [because] it has not happened with Thrones so far." Which may be true, but not even a widely popular series like Game of Thrones is immune to a good ribbing every now and again, especially given how long fans have had to wait for the final season. You'd think someone would've spotted the mistake eventually. So yeah, the internet is going to have some fun with it. And as HBO's statement clearly indicates, the network is willing to own the snafu and go on to joke about it themselves.

At the end of the day, it may not have been that big of a deal and it shouldn't prevent viewers from tuning in for the final two episodes, but hey, at least the episode provided enough lighting for us to spot the cup in the first place, so that's something! Either way, let's just have a moment of silence for our fallen friend. You may be gone, but thanks to the power of memes, you'll never be forgotten.