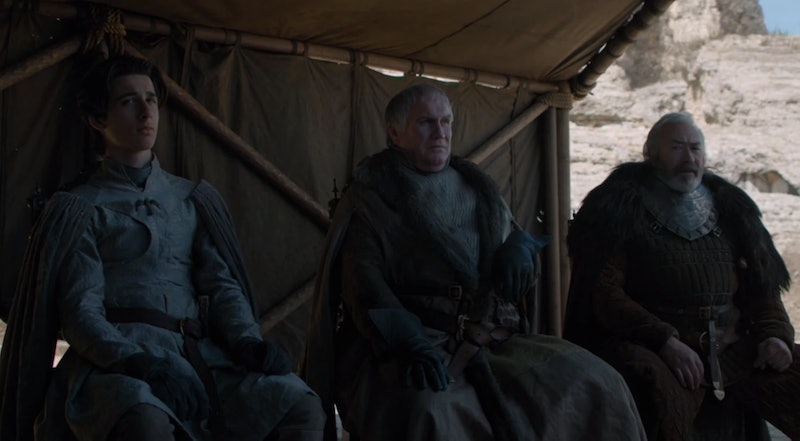 Call him Milk Boy, Warden of the Hot. The person who played Robin Arryn on Game of Thrones has seen the "Robin Arryn got hot" tweets, and yeah, he's cool with them. In a new interview with Vulture, actor Lino Facioli addressed the Robin Arryn Game of Thrones memes that surfaced after his character popped up on the series finale. You thought you were caught off guard by his glow-up? Facioli was so caught off guard by the response to his glow-up that he assumed his "phone was malfunctioning" when all of the post-episode messages and notifications started rolling in.

It'd been a few seasons since we last saw Robin Arryn, and when he reemerged on Sunday's episode, it threw many fans for a loop. Partly because it'd been a while since he'd been on the show, but mostly because he grew up and got hot. When we first met Lyssa Arryn's son, he was old to play Fortnite but still breastfeeding. Now he is all grown up and representing House Arryn when the Great Council gets together at the Dragonpit to chit-chat about who should and should not rule Westeros.

If you did not expect to see Robin Arryn sitting a few chairs down from the Stark kids in that Great Council scene, Facioli was right there with you. “I didn’t really know for certain if I was going to be in the last episode so it was almost as big a surprise to me as it was to everyone else,” he explained. “I’d done the scene, but with things like this you never know if it’s going to make it to the last cut.”

Naturally, a bunch of Game of Thrones fans tweeted about Robin Arryn's surprising return. And you know, his, uh, glow-up. And Facioli seems to be enjoying the reactions. He told Vulture,

“To be honest, I’m still taking it all in. My parents are just … we were laughing, we were like, This is hilarious, this is crazy. I’ve got friends being like, ‘You’ve got memes about you, man.’ That’s their definition of fame.”

He's got memes about him and, as he told TMZ on Tuesday, a heck of a lot of new followers on social media.

“I’ll be honest, this is the best I’ve ever had it in terms of memes. Being that weird kid on Game of Thrones … when I was a teenager, I was like, ‘How do I deal with this?’ I was not that comfortable with it. But it made me get tough skin and have fun with it. Even when it’s something that’s mocking you, it’s about just laughing at it and carrying on and enjoying it. It’s a better position that I’m in now, to be able to have more confidence in terms of that critical voice when I didn’t know how to deal with it.”

Facioli said that he and his friends have a good sense of humor about the Robin Arryn memes. "I'm just enjoying it," he added. "At the end of the day, I am pretty happy with what’s happened." Hey, if you can't meme 'em, join 'em.