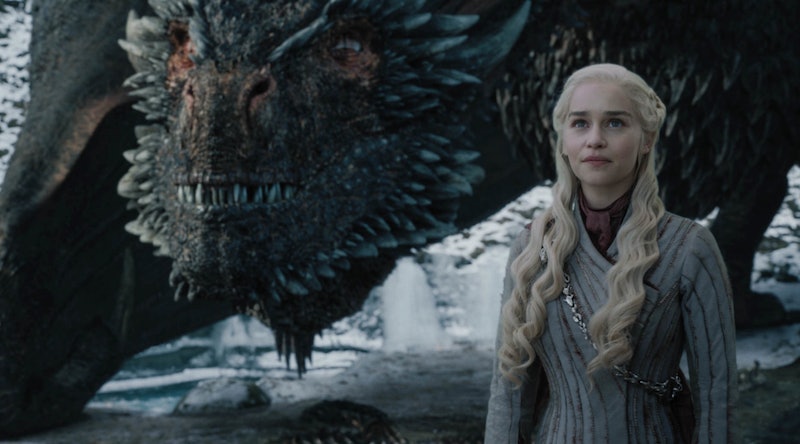 You spoil nothing, Jon Snow. And by “Jon Snow’ I mean Game of Thrones finale pictures. (Don't give me that look. I am just trying to get the “You know nothing” jokes out of my system while the show is still on the air.) On Wednesday, May 15, HBO released some new images of the final episode of Game of Thrones. Now, not to be ungrateful or rude, but there are only two photos. And not to be totally stuck in the past, but HBO usually offers up anywhere from five to, like, a dozen new pictures before an episode airs. The final season of the immensely popular fantasy show based on George R. R. Martin’s hit book series will reach its highly anticipated conclusion on Sunday, May 19, and to hold us over until then, HBO has unveiled two photos. Just two.

On the one golden hand, this makes all of the sense. The folks behind Thrones do not want to give away too much before the series finale, so they are keeping the pre-episode media to a minimum. But on the other golden hand … two photos? Just two? That's all we get?

Ack, sorry about all of the griping. Let's get to the oh-so lovely pair of pictures. In one of the images that HBO released before Sunday’s series finale, we see Tyron Lannister. He is standing somewhere in King’s Landing— er, what is left of King’s Landing. Understandably, he looks unhappy. And even after everything Daenerys Targaryen did to King's Landing, the Hand of the Queen pin remains on his lapel. (Well, for now, at least.)

In the second picture, Daenerys peers out at at the surviving members of the Unsullied and the Dothraki armies. King's Landing continues to burn. We do not see her face. For all we know, she could be puffing out her cheeks like a pufferfish at the crowd. We'll just have to wait until the finale to find out.

If you’ve already watched the preview for the Game of Thrones finale, then these photos may ring a bell. (Yikes, that idiom sure does sting after the penultimate episode.) In the trailer for the final episode, there is a clip of Tyrion trudging through the burning ruins of King’s Landing, and in another clip, Daenerys walks toward the Unsullied and the Dothraki soldiers. The photos are not showing us anything we have not seen before. Hey, you don't have to take my word for it: You can watch (or re-watch) the preview below.

The theories and predictions about the show's ending have flowed like Cersei Lannister's hair before she was forced to chop it all off, but the series of photos from this Sunday's big episode, however, is about as long as Cersei Lannister's pixie haircut. And you know what? The more I think about it, the more I am OK with it. I've waited about a decade to be awed and shocked by the Game of Thrones finale, and I would probably go full dracarys if some revelatory photo spoiled that for me.